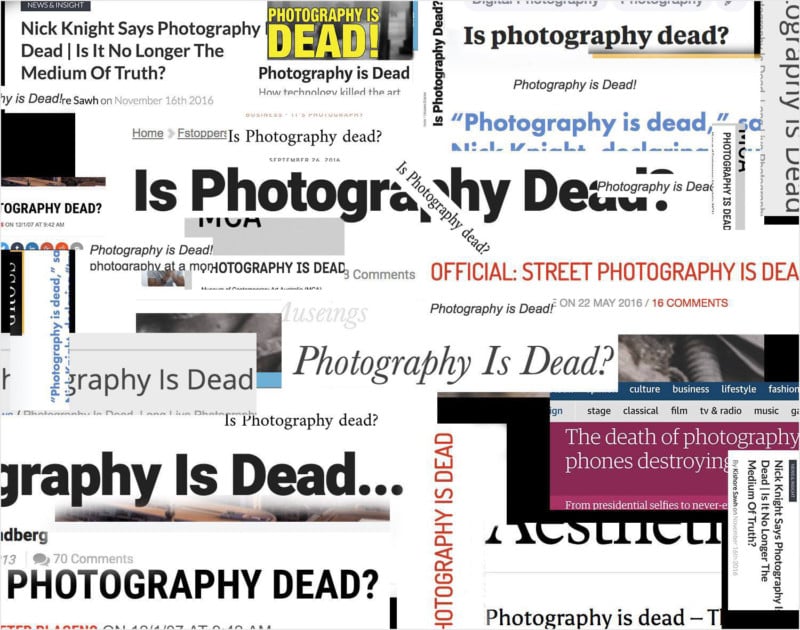 Lately, the photography sphere has been inundated, not with the gazillions of photos everyone is talking about, but with article after article proclaiming that photography is dead/over/irrelevant/trash.

The questionable assumption here is that it was ever alive in the first place, but what puzzles me most is how this status has been defined. And it is about status in the end, because the reasons given for photography’s untimely (or exceedingly timely, depending on the source) demise are invariably centered around the rise of social media, short attention spans, instant sharing and, inevitably, cat pictures.

However, in a world where so many photographer bios begin with “I began documenting the meaningful moments of my existence with my iPhone in 2009,” I wonder if some context is missing from this argument. The so-called “life” of photography referred to in these articles arose from the concurrent rise of digital cameras and the Internet in the 2000’s, resulting in an army of technology-minded dudes buying the latest megapixel box they’d seen get a gold star on DPReview so they could make sure every pixel was sharp before Photoshopping the living hell out of it (using the handy Living Hell slider), uploading it to Flickr or 500px and watching the Faves roll in.

Ok, so I’m exaggerating. A bit. Obviously, a few of these people were, and remain, serious photographers with serious work. But the driving force behind this boom, this zombie “life”, was mainly hippishly whitebread men who worked in IT buying rather large cameras and showing their files to each other on rather small screens. Numbers ruled this phase of the game: numbers of faves/likes, numbers of followers, numbers of shots, no matter how awful the photos. One such dude in San Francisco (because of course it was some dude in San Francisco), made his only goal taking a million (completely unremarkable) shots, and he got quite a lot of attention from his considerable fandom.

I can’t remember his name for some reason.

During this time, the dedicated photographers who had been working quietly and being ignored for decades before the boom, continued working quietly and being ignored, though a handful got caught up in the storm and propelled to Internet stardom. Magnum, sitting suddenly up in its comfy chair and remembering its illustrious history, returned belatedly to the fore when they realized that their website needed an upgrade; they began changing their reporting and recruitment styles to suit the “life” of this new reality. Skateboarding also factored in there somehow, because of course any old thing being subjected to rejuvenation must by law involve skateboarding.

So for a time, everyone was All About Photography, particularly “street” photography, which is the easiest to practice because it doesn’t require anything in the way of studios, sets, models, lights, conscious thought or, from looking at most of it, talent. Bloggers featured their friends in “The (insert number here)-best photographers RIGHT NOW”-type listicles, some of which became actual books. Publishers pole-vaulted onto this suddenly relevant bandwagon, and groups on Flickr appeared and thrived on the drama of clashes between personalities.

Amid all this, it must be admitted, some photographers did actually get to know about other photographers and enjoy each other’s work. Several collectives emerged from the chaos, e.g. in-Public, Burn My Eye, and Observe. Of course, many others promptly disappeared when they found out that ego clashes are far less entertaining when you’re actually trying to work together in some fashion.

But then Facebook and Instagram arrived on the scene, along with decent mobile phone cameras. These burgeoning businesses quickly realized that what the vast majority of people wanted out of all this was not actually photography, but rather that short sharp injection of dopamine that came with simply seeing something new. Clicks, but not those of the shutter variety. Eyeballs, but not through viewfinders or at exhibitions. Photography itself didn’t particularly matter to these industries; it never had. It was a means to an end, which inevitably means an end to the means.

Digital camera performance plateaued as manufacturers tried to make them more like mobile phones, cramming things like wifi, video, and touchscreens into their machines and then wondering why nobody was buying their larger, heavier boxes. Computational mobile photography came to the fore, the camera boom waned; the party began to lose steam. Video was supposed to take over, but nobody could figure out the fundamental difference between the two media.

In any case, most people discovered they could get all their ego-driven drama needs from Facebook, and all their dopamine hits from Instagram, effectively severing the connection of conversation and photography that had been the accidentally advantageous side-effect of sites like Flickr, where you could do both, but not with the same rabid intensity. Some people tried to lure young would-be photographers into thinking they could “make it big” through competitions that they could only participate in after paying for the honor of consideration by their illustrious jury of people they’d never heard of. But then the world quickly learned that photography, like the cake, was a lie after it was found that many entrants in these contests were the result of applying a bit too much of the “Asshattery slider” in Photoshop.

The relationship between actual photography and social media was fraying; some would-be serious photographers desperate to hold onto these heady days tried spamming all their contacts about Kickstarter campaigns to fund their photo books. Precious few were any good. But then, truly good photo books have always been 1) few and far between and 2) generally ignored by most people.

And then, photography was dead, lying on the metaphorical sidewalk in a pool of its own metaphorical blood. You read it in an article by some famous Internet person with an impressive-sounding name. And then you read it again. And again. Dead. Over. Kaput.

But what died, exactly? The techie crowd had become bored with these particular machines, moving on to newer, shinier gadgets, and young people, like most young people, just wanted to hook up. Nothing wrong with either, and certainly nothing new. The dedicated photographers who had been working quietly and being ignored likewise continued in this fashion, and will keep doing so even while everyone else is using brain implants to beam live VR experiences featuring their cats.

In short, the “death of photography” these articles lament is actually the loss of the veneer of popularity photography momentarily enjoyed when it was caught up in the perfect storm of technological progress and social media. The three were conflated so closely for a time that most people assumed that, when the latter two moved on, photography would be rendered meaningless. But that is a false narrative; the essence of photography hasn’t changed; it has always been, at its core, a small, largely ignored niche. Not something for everyone, nor the grand new universal language once promised to us. Photography’s unique and quirky nature of stopping time and conveying complex emotion in one small frame was one of the things that drew me to it when I was growing up, and it occurs to me that perhaps we should just let it be what it actually is, without all the trappings, the bells and whistles of social trends.

Put your glasses back on, photography. Lose the makeover. Put on those comfortable shoes. And welcome back.

About the author: TC Lin is a photographer based just outside Taipei, Taiwan, at the edge of the mountains. The opinions expressed in this article are solely those of the author. Lin is an original member of the Burn My Eye photography collective (which can also be found on Instagram). You can find more of Lin’s work on his website, Flickr, and Instagram. This article was also published here.

GoPro Laying Off Up to 300 Workers as Karma Drone Flounders: Report