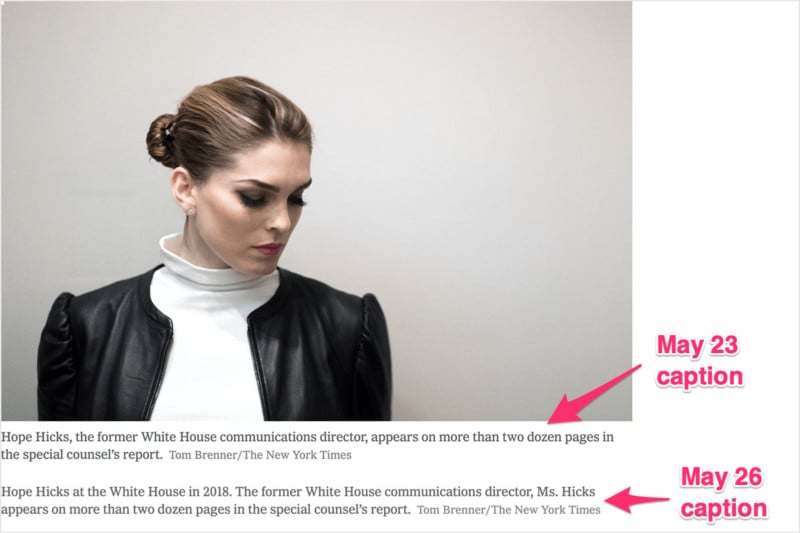 Unlike most types of photography, photojournalism abides a more stringent set of ethical guidelines because truth is paramount to accurate reporting. Many newspapers enforce their own ethical journalism guidelines, which tend to focus on retouching and the use of photo illustration techniques (e.g. compositing, timelapse, panoramic, etc).

One often overlooked aspect is accurate captioning. After all, many photos are ambiguous without written context. Deception of this sort is often used by authoritarian regimes and disinformation peddlers. Which makes The New York Times’ use of Tom Brenner’s photo of Hope Hicks all the more frustrating.

On May 23, 2019, the NYT published a piece entitled “Hope Hicks Left the White House. Now She Must Decide Whether to Talk to Congress” by political writer Maggie Haberman. The title alone lit up Twitter with accusations of privilege and favoritism with its implication that following the law was optional.

Complying with a congressional subpoena is the law, a legal requirement foundational to our system of checks and balances—not “an existential question.” Unless you’re talking about the continued existence of functional democracy, I suppose. https://t.co/4HL4sBPMhi

Also the glamour shot which screams: “criminality is glamorous on a vulerable white woman.” 🤔lord I wish black women were treated with this reverence and given “choices” like #HopeHicks

Regarding the "glamour shot" remark… Hope Hicks is a former model, she looks like that in most pics pic.twitter.com/hQ0L4Dze2d

As a photo blog, I was more interested in the perception that the photo was a “glamour shot.” Indeed, Hicks appears to be well-groomed with hair, make-up, and clothing that might be more familiar within the pages of Vogue. But the overhead office lighting suggested otherwise.

My interest was piqued, especially given the ambiguous caption from May 24:

Tom Brenner covers the White House for the NYT. He’s a talented photojournalist, but he’s not a softbox-toting portraitist. In other words, this wasn’t a posed photo. And indeed, Brenner confirmed in a now-deleted tweet that this was not a staged shot. 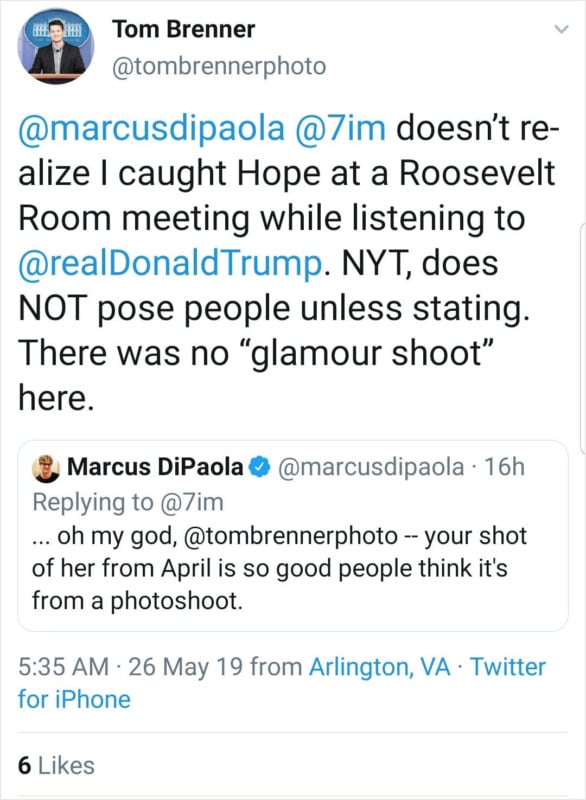 Then at some point on May 26, the Times amended the caption to read:

The Times sometimes issues correction statements at the bottom of an article, but no such annotation was made for this article. And NewsDiffs, a service that tracks changes to news articles, did not pick up on the change. Fortunately, the Internet Archive Wayback Machine did.

The addition of the date is both important and troubling. The date indicates that the image is a file photo and not related to the subject matter of the piece. The NYT should have made that clear from the start. But it also means that among all of the available images taken by Times photographers alone, an editor decided that this one — a pose with averted eyes, heavy make-up, a fitted leather jacket, shot against a plain white background — was the best choice. The selection literally caused readers to believe that this was a glamour image.

By contrast, consider this image by Getty Images photographer Chip Somodevilla, who has been covering DC politics for years:

Somodevilla’s image has much more context. Hicks is still well-dressed and styled, but the presence of Sarah Sanders and another staffer in the background combined with wall detail and the flare in the upper left corner, make it much more identifiable as a briefing room image. It is unambiguous that this is a non-staged, documentary photo.

(I should be clear that I am not criticizing Hicks’ appearance. I believe she can wear whatever she wants as long as it comports with the decorum of the White House – e.g. no jeans and ripped T-shirts.)

The inclusion of the date and selection of a different image wouldn’t have necessarily assuaged critics of the contents of the piece, but it certainly would have eliminated any ethical ambiguity around the use of photography and Hicks’ appearance.

Sony Overtakes Nikon for the #2 Spot Behind Canon