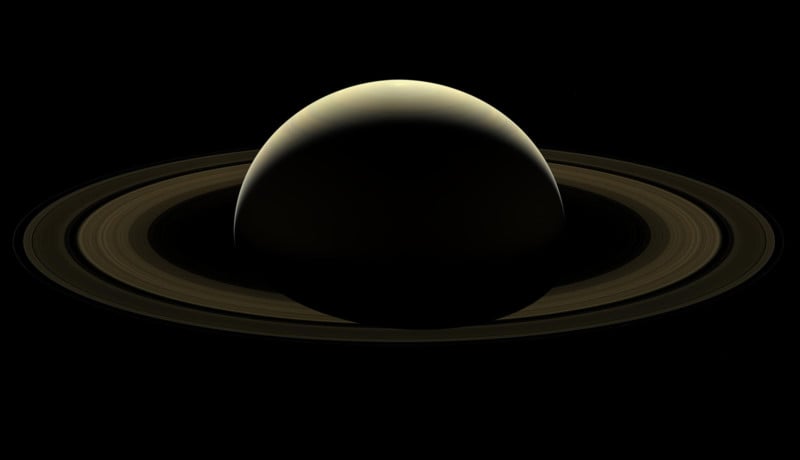 On September 15, 2017, NASA’s Cassini space probe plunged into Saturn’s atmosphere and burned up, concluding its mission after 13 years in orbit. Two days earlier, Cassini used its wide-angle cameras and captured this beautiful final photo of the planet it had studied for over a decade.

NASA writes that Cassini spent two hours shooting a total of 80 wide-angle photos of Saturn during this planetary photo shoot. 42 of those 80 photos, shot using red/green/blue spectral filters, were combined and stitched as a mosaic to create the final natural-color photo.

Six of Saturn’s moons — Enceladus, Epimetheus, Janus, Mimas, Pandora, and Prometheus — are also faintly visible when looking at this photo up close.

“This view looks toward the sunlit side of the rings from about 15 degrees above the ring plane,” NASA says. “Cassini was approximately 698,000 miles (1.1 million kilometers) from Saturn, on its final approach to the planet, when the images in this mosaic were taken.”

If you’d like to see some of the most beautiful Saturn photos captured by Cassini during its life, check out this gallery we shared in 2015.

Moment Counterweights Let You Use Lenses with the DJI Osmo Mobile

A Beginner’s Guide to Getting Blurry Backgrounds in Portraits