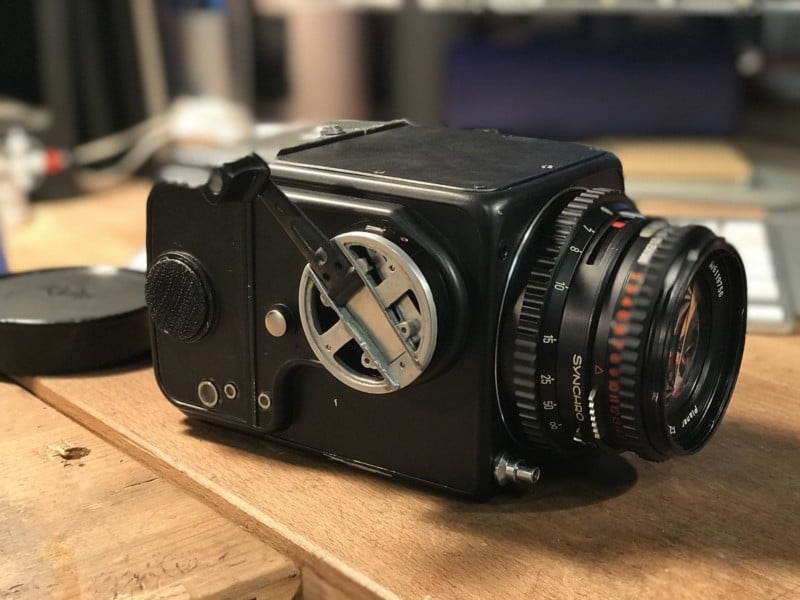 Photographer Cole Rise has a deep obsession with space cameras. So deep, that he just spent over two years creating a 100% accurate replica of the first Hasselblad medium format camera used by NASA in space.

Early space photos shot by NASA astronauts on 35mm film lacked clarity and resolution, so astronaut Wally Schirra consulted with photographers at famous publications for recommendations. They all pointed him toward the Hasselblad 500C. Schirra purchased one from a photo supplier in Houston and worked with NASA engineers to modify it for spaceflight. 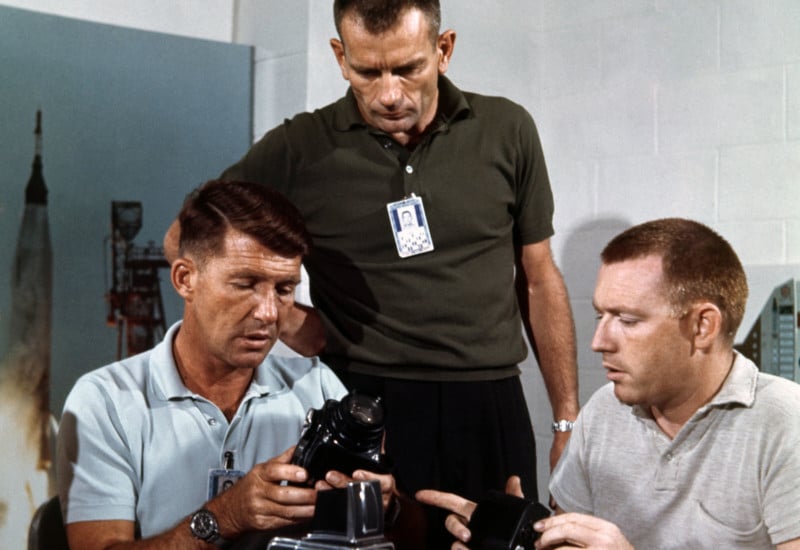 “This camera has been an obsession,” Rise tells PetaPixel. “Since very few of us can afford the real thing, I spent the last two years building out a metal workshop, cutting my teeth on a mill and a lathe, and becoming a Hasselblad technician to get my head around everything NASA needed to know to make this camera a reality.” 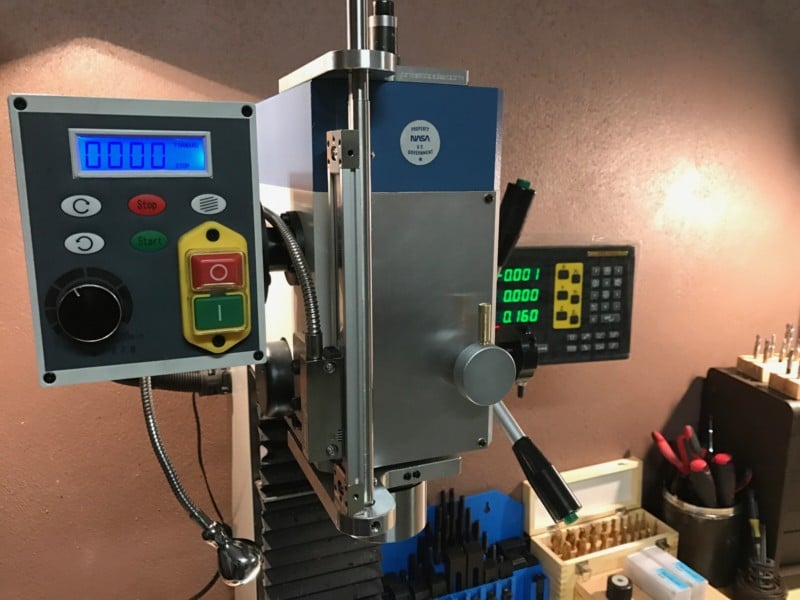 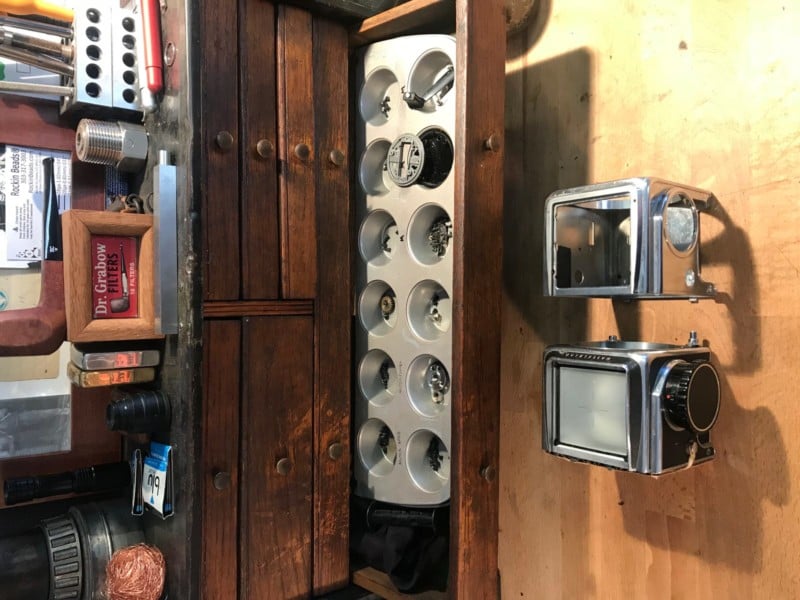 “Every camera takes 2-3 weeks to fully modify, depending on the variant,” Rise says. “It involves drilling and tapping holes for period accurate, slot-headed screws, manufacturing custom parts, sanding, polishing, painting, and subtly weathering to match the original camera as it existed pre-launch – all in addition to a full lubrication and refurbishment of the critical parts.”

So what’s different about NASA’s space Hasselblad 500C compared to the one that was on store shelves? (The following photos are of Rise’s recreated camera.)

First, it had a custom side-finder.

“The window was located behind the astronaut, just above his head, so it was impossible to frame a shot with a waist-level viewfinder, especially in such tight space,” Rise says. “NASA removed the mirror, focusing screen, covered the hole with a custom aluminum plate, opting instead for a simple optical viewfinder on the side that allowed the astronaut to aim and shoot while wearing a space helmet.”

The camera also used anti-reflective matte black paint coating to avoid showing up in reflections in the spacecraft window. 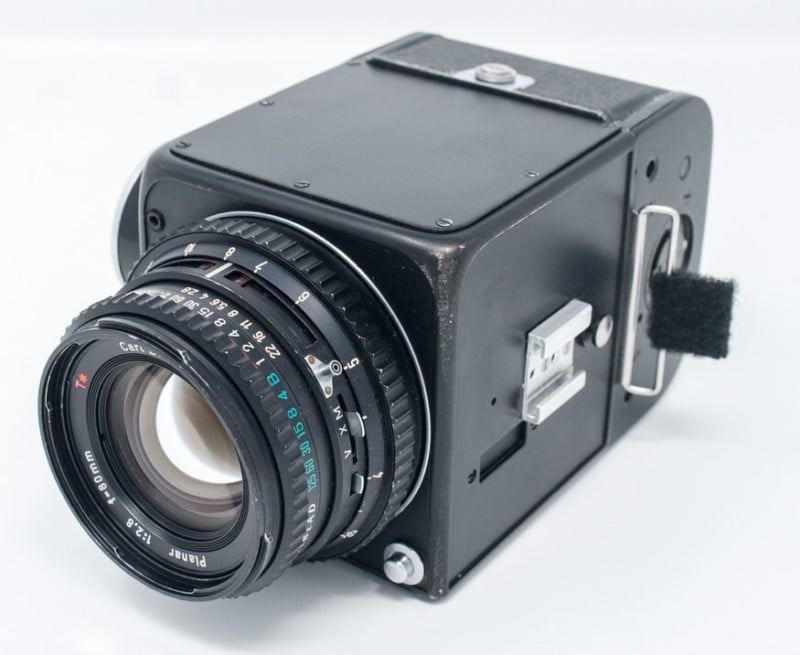 NASA also modified the film back to prevent it from being accidentally opened while in space. “NASA was worried the film back would be opened accidentally by spacesuit gloves or while being removed from the astronauts ‘ditty’ bag, so they carefully removed the film latch, instead relying on two holes for a spanner wrench so it could only be opened by engineers when the camera arrived back on earth,” Rise says. “They also converted the back to work with 100 frame rolls, rather than the standard 12.”

Another interesting mod is the fact that any excess metal was taken out of the camera to save on weight. 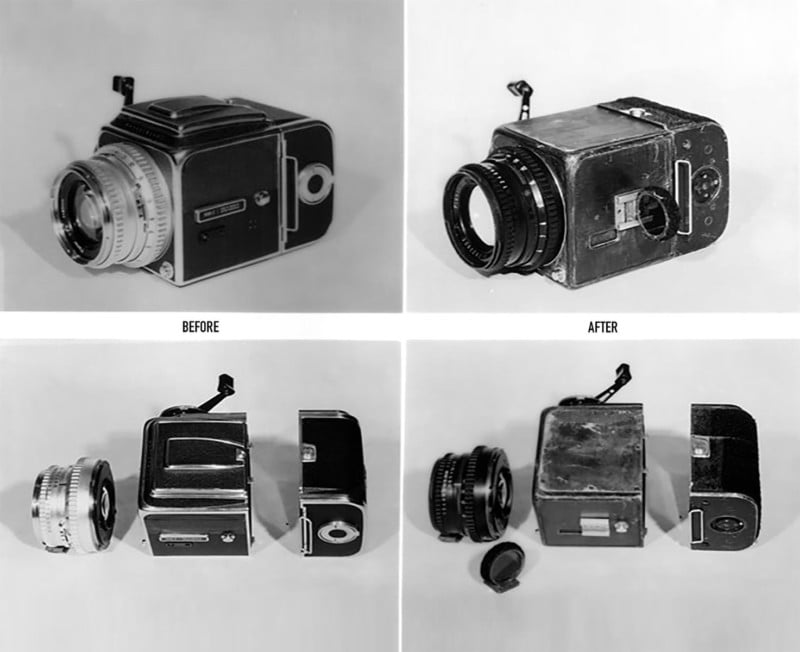 “Every ounce counted when launching stuff into space,” Rise says. “Just one pound of cargo cost thousands, if not tens of thousands of dollars – a water bottle cost $10,000 to launch on the Space Shuttle.

“Drilling excess metal from the wind crank and film back helped save crucial weight. This was also further justification to remove the mirror and focusing screen.”

Finally, a “ton” of Velcro hook and loop fasteners were used to secure loose camera parts to prevent them from flying around in microgravity. 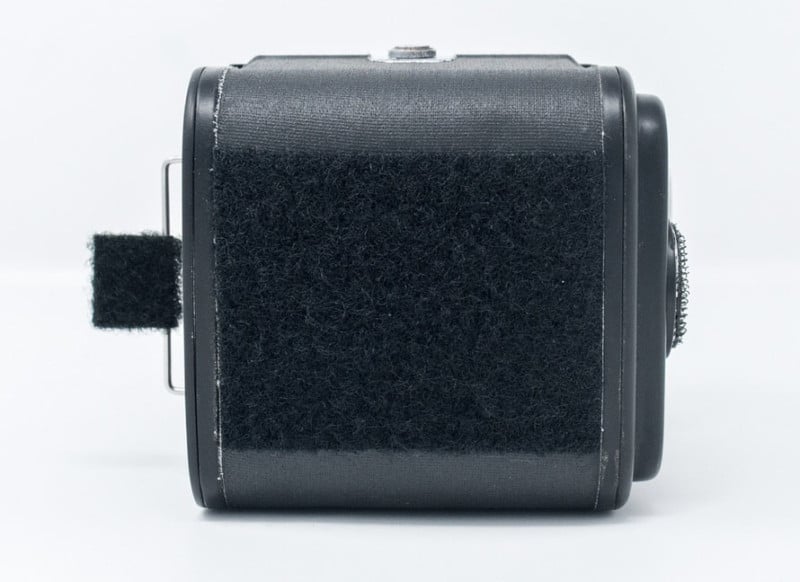 “It’s actually a common myth that Velcro was developed specifically for NASA,” Rise says. “The Velcro corporation did produce a special variant of the material, however, for exclusive use aboard NASA missions, which quickly popularized the brand – so exclusive that even today after the dissolution of the shuttle program, it’s not available to the public. Trust me, I’ve tried ordering it.”

“The Mercury Program, however, used a more common variant that is still available. I’ve even counted rows of hooks to exactly match the original camera.”

After two years of research, planning, and work, Rise finally created a perfectly accurate recreation of what NASA sent up into space. 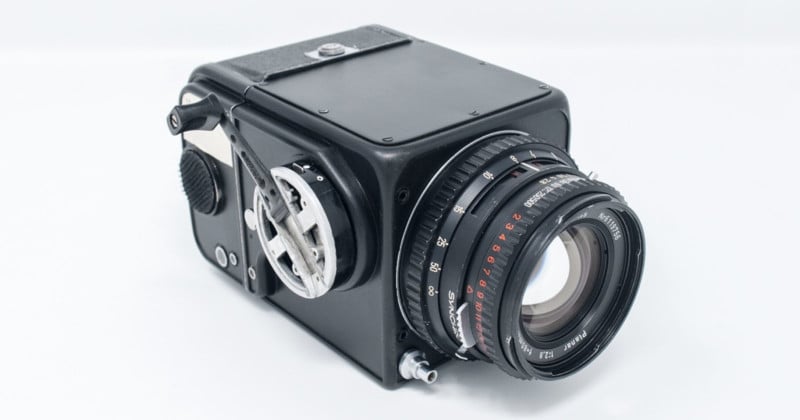 In addition to the matte black replica, Rise also made a chrome version: 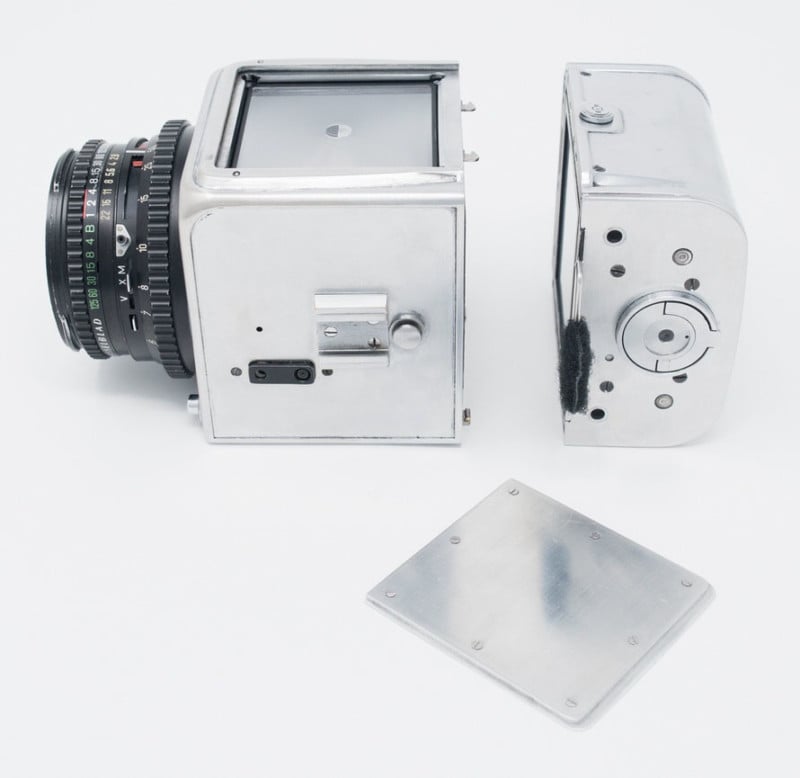 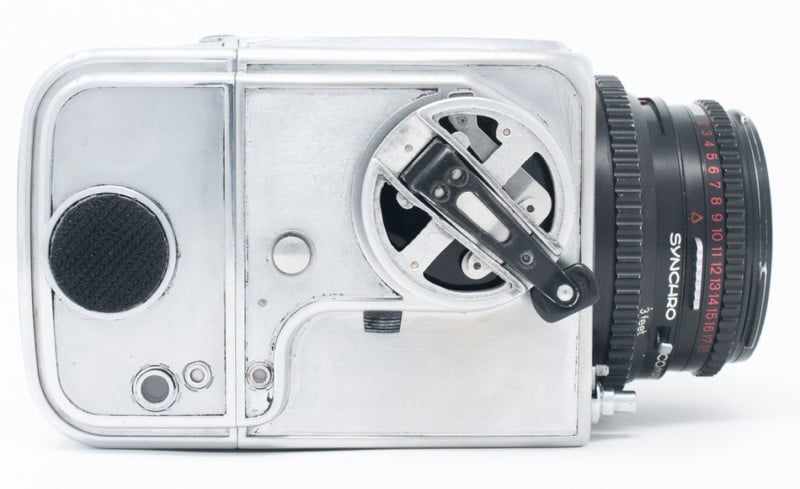 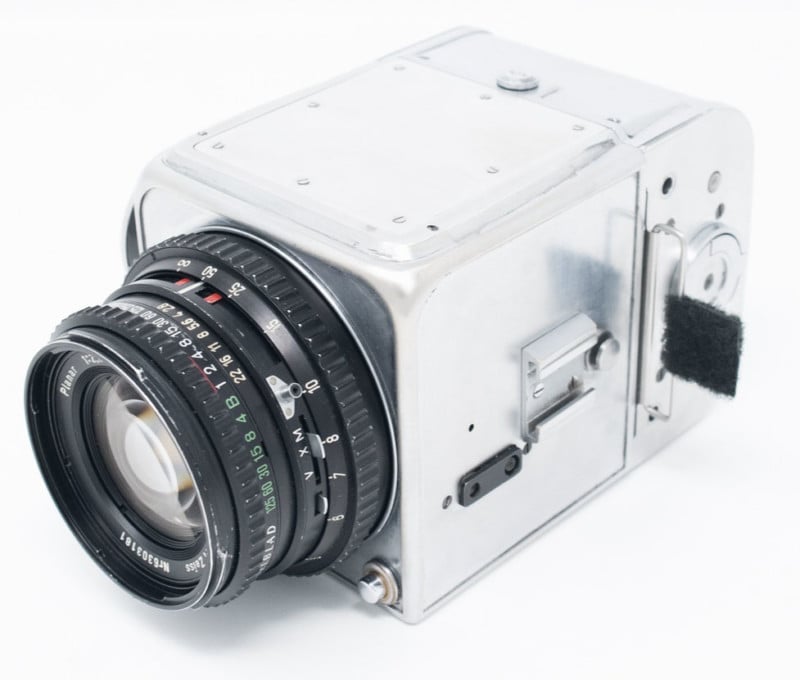 Rise is now selling these ultra-limited-edition Hasselblad 500C space replicas, and it’ll cost you $4,800 for the black version and $4,200 for the chrome one. The original Hasselblad used by Schirra sold for $275,000 at auction back in 2014. 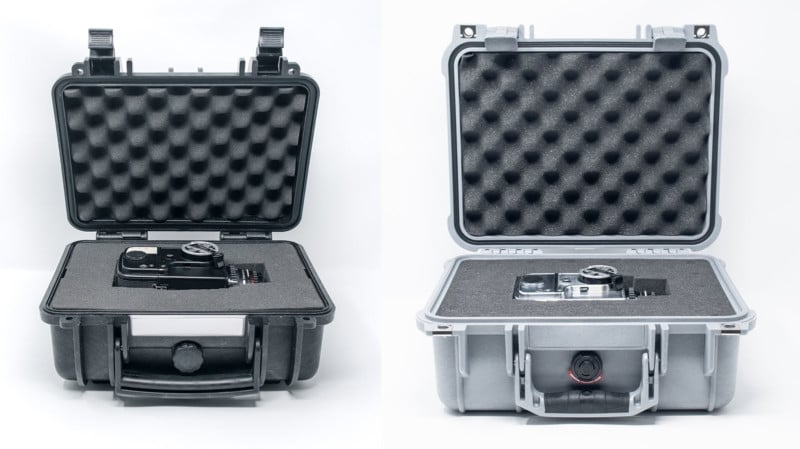 “Each one is customizable to the photographer’s preference, with a choice between the anti-reflective black coating, or space chrome, and the option to keep the film latch, the 12-frame gear system, and the variable focus in the lens that allows for everyday shooting,” Rise says. “In all, after the replica I keep in a display case, I’ll probably make 10 of these.”

Nikon to Shutter Its Sales in Brazil

iPhone X Best Smartphone Ever for Still Photos But Not Video: DxOMark