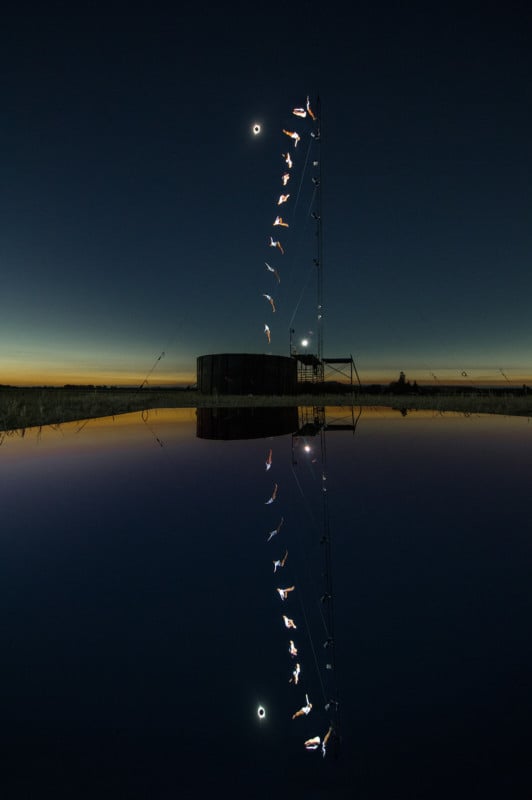 This is a post about photography plus trigonometry. I remember half joking with my math teachers in high school, asking “why do we need to learn this? I’m never going to use it in life.” Fast forward to 4 months ago when Red Bull Media House calls and wants to shoot a cliff diver eclipse photo.


After doing some research, I discovered that the eclipse would be in totality at a very high point in the sky, and it would be very difficult to line up with the divers given the long focal length needed. We had to figure out the correct angle, height, and distance. Luckily I retained some of that math knowledge (and also had some help) and was able to pinpoint every position, height, and angle needed for our shot list.

We prepared for this shoot for four months. With so many moving parts and elements that need to perfectly align, preparation was definitely the key to success. We needed the perfect location with the right amount of distance of open space and it had to be in the path of totality. We also needed a spot for the divers to dive and to make sure the divers were high enough in the air to align perfectly with the sun.

After looking all over the country at different locations, we choose a farm in McMinnville, Oregon, with a large wide open field. There was a dive tank (normally used in traveling carnivals and other performances) erected in the middle of the open space, and we had it filled with 30,000 gallons of water (which was later used to water the very dry and dusty field.) 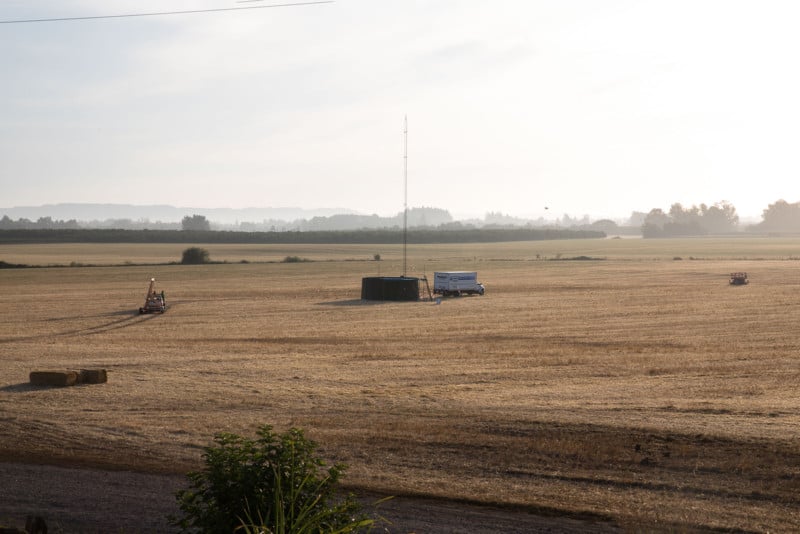 For the days leading up to the shoot, we used a range finder to map out shooting positions and tested focal lengths, dive times, and lighting.

I’m not too keen on heights and although I worked in a theater in college and I would hang lights in catwalks about 20-30 feet up, I couldn’t imagine myself climbing and hoisting lights up an 85-foot tall tower. Just standing under it looking up gave me chills. So we enlisted the help of one of the amazing dive tank crew members Clark to help with rigging and hanging each one of the lights. We used Kupo Grip Super Viser Clamps to mount the lights to a pole that stuck out 2 feet so the light could be angled correctly. 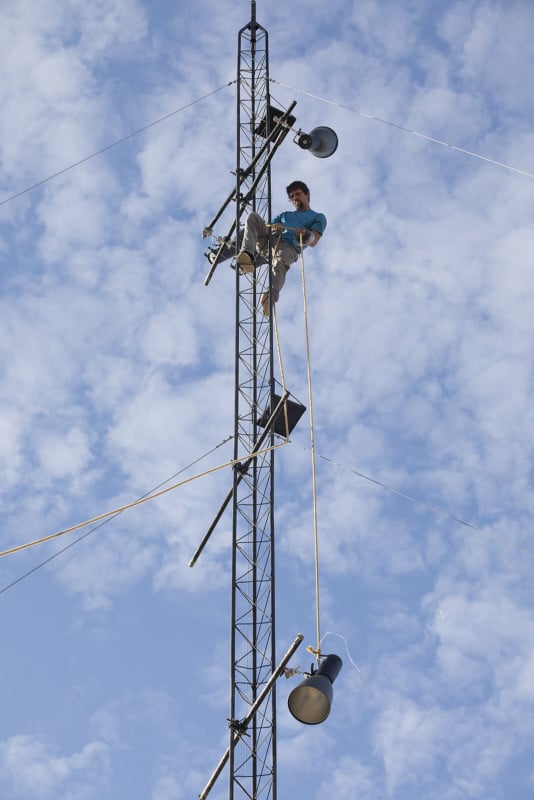 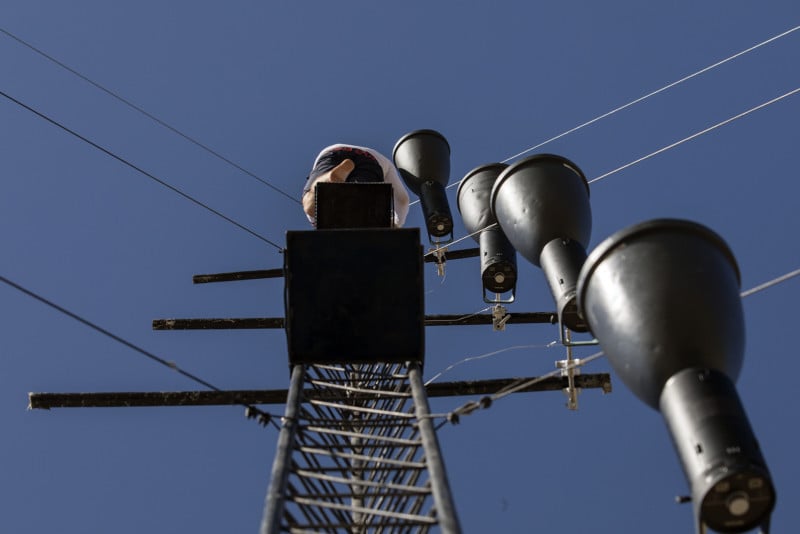 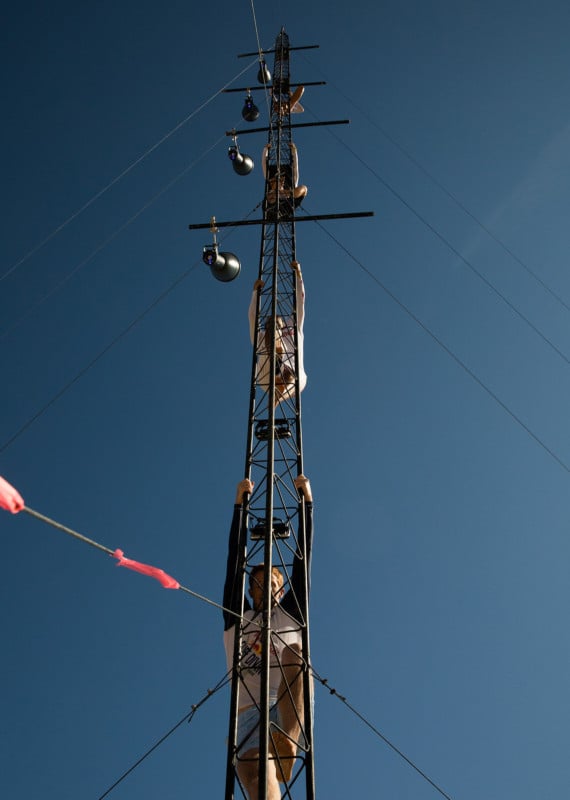 We used the Broncolor BronControl app on my phone to control the power and speed of the lights while they were up on the rig. 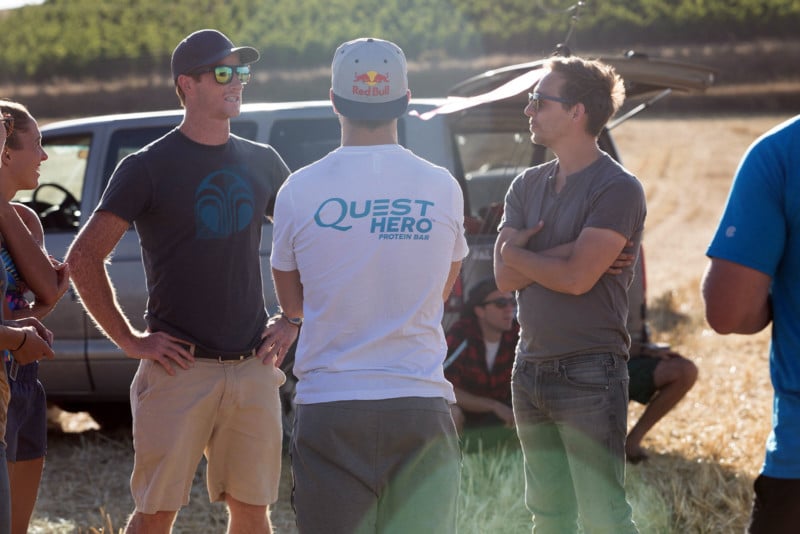 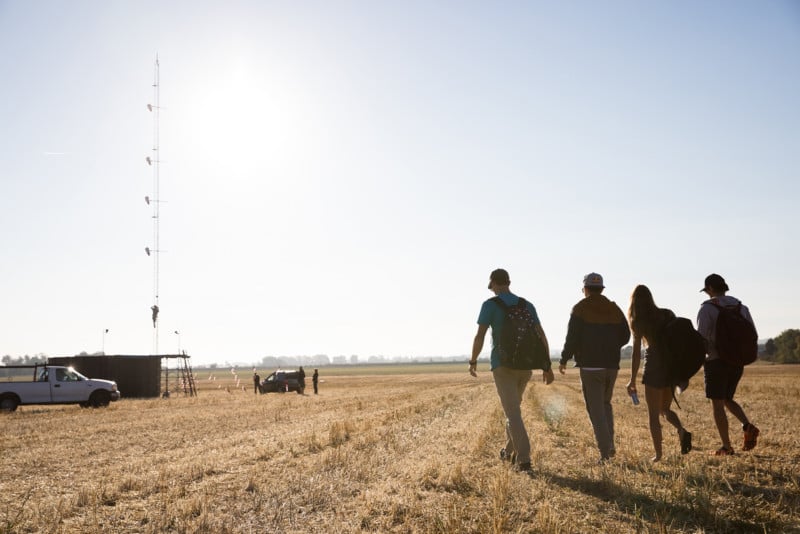 The day before the eclipse we had a test shoot day with the divers to test timing and basically do a dress rehearsal of the eclipse. This was so we can see how many dives each diver could do during the different phases of the eclipse.

I knew it was going to get dark during the totality but I didn’t know how dark. So we needed to test the lighting at dusk and a little after so I could have a better idea of the camera and lighting settings before totality happened. I wouldn’t have enough time to get 4 divers off the platform, cleared, and be able to dial in settings. I needed to know before it happened so I could be ready. 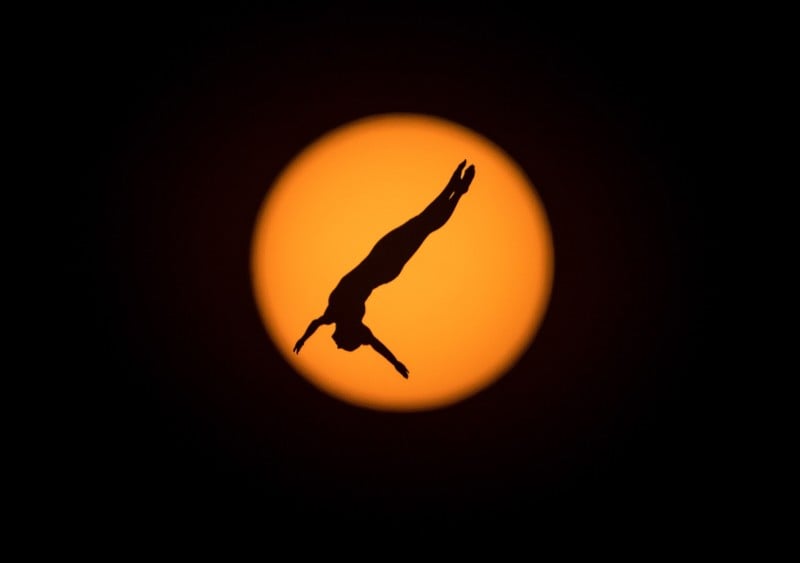 I decided on a higher ISO than normal because otherwise the background in the photo would be way too dark and there would be no context to how the sky actually looked and I couldn’t do a multiple exposure shutter bracket because I was shooting a sequence shot. Here are the settings and equipment I used for the sequence photo: Canon 1D X Mark II, Canon 11-24mm, 15mm, ISO 3200, f/5.6, 1/160 light power (4 on each head). 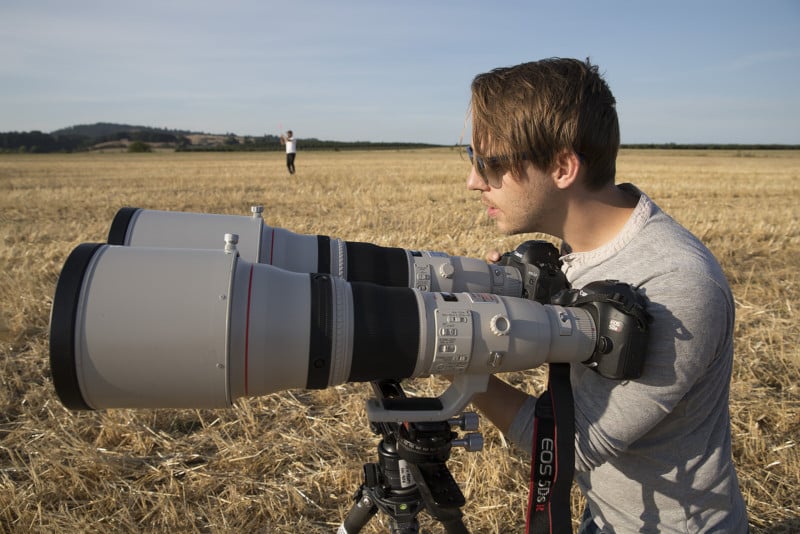 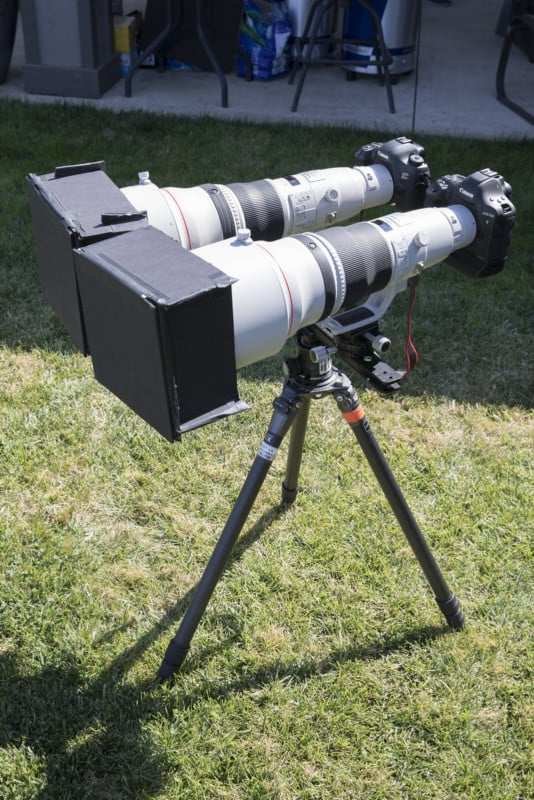 Whats better than one solar eclipse? Two (right!?!)! One of the first shots I imagined when thinking of this shoot was a diver diving into a large body of water with a beautiful reflected eclipse in it. But, because our dreams of shooting with a natural water source were crushed by science and math, I decided the next best thing was to bring in a special front coated mirror (the type they use in large telescopes!) to give the illusion of water and provide a nice mirror image of our scene.

It was a very surreal moment once totality started and the light around us began to fade. I heard one of the divers yell that they couldn’t see the water. Without missing a beat, my super assistant Daniel Bray and “crazy” Clark ran over and climbed up the scaffolding on the 10-foot-tall staging area with large flashlights to supplement the LED work lights we already had in place. 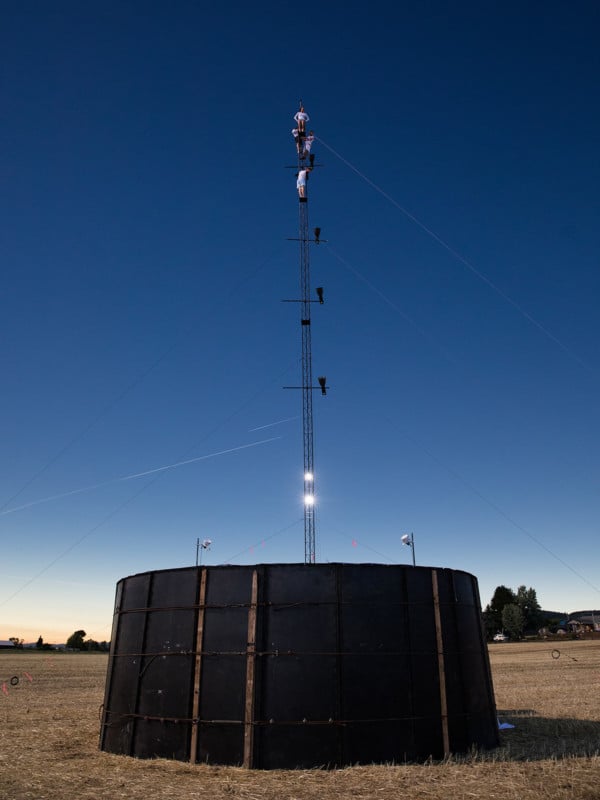 A few seconds went by and I felt my adrenaline rushing because I knew there were only 55 total seconds of totality and 15 seconds have already passed while getting the additional lighting in place. Once it was deemed safe and the diver’s eyes adjusted to the darkness better, the first diver jumped. 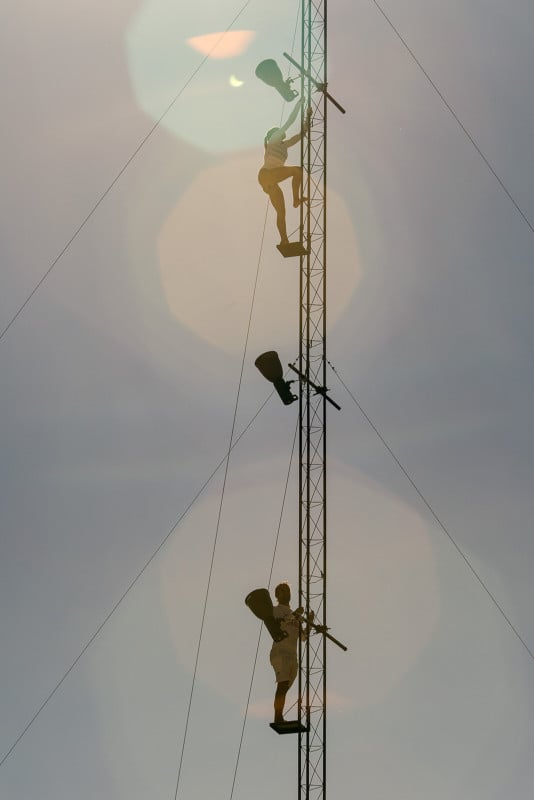 I fired 18 frames off during the 2.7 seconds it took to reach the water below. I quickly checked the images on the back of my camera to make sure they had the correct lighting exposures on the diver and then, using a series of walkie-talkies strapped to the ladder all the way to the top, relayed to them that they could position themselves on the 1-foot-diameter platform and jump when they were ready. The divers were all staged on different parts of the thin 85-foot ladder to speed up the climbing process. 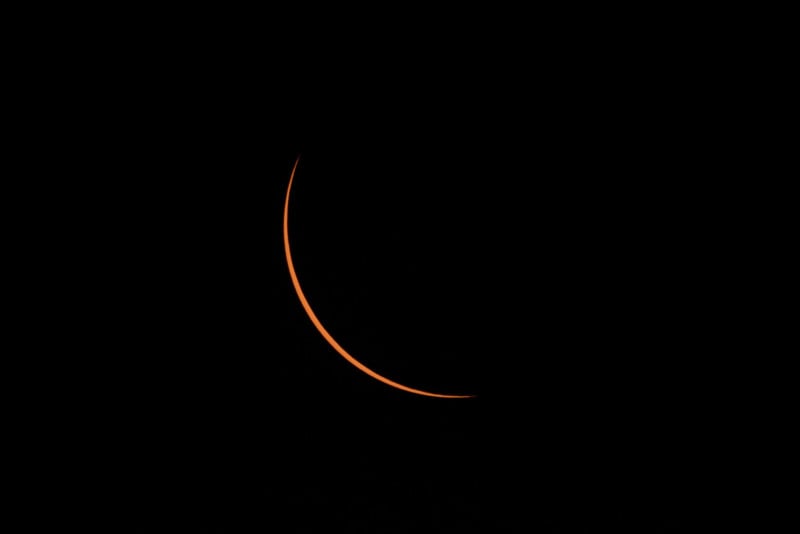 As the last diver reached his arms into the sky to indicate his jump, a sliver of the sun peeked out from behind the moon and created a starburst in my camera as I fired off the last sequence shots. 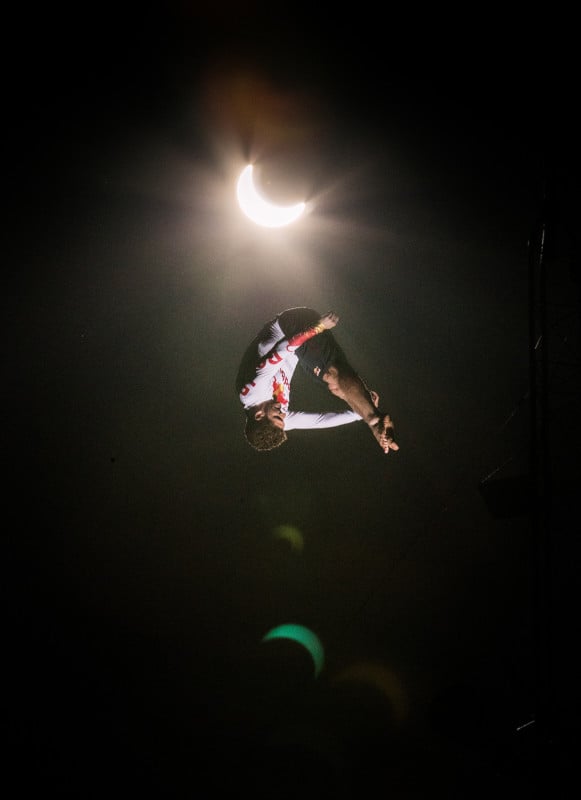 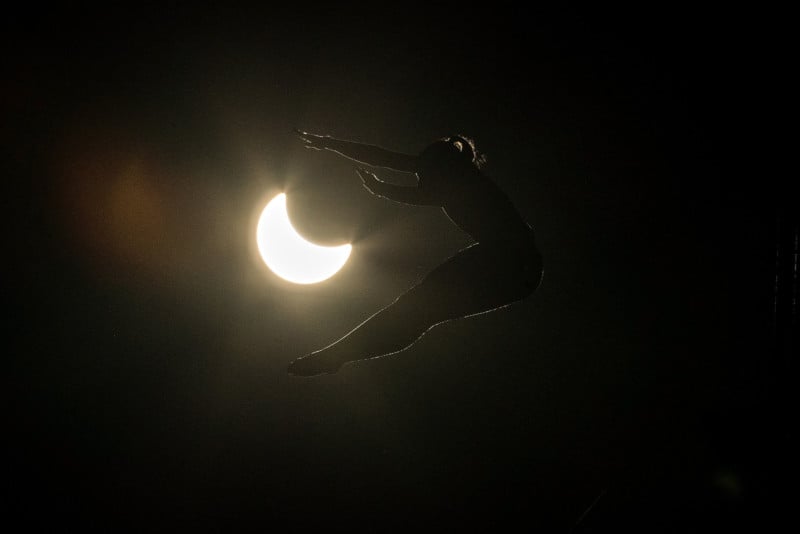 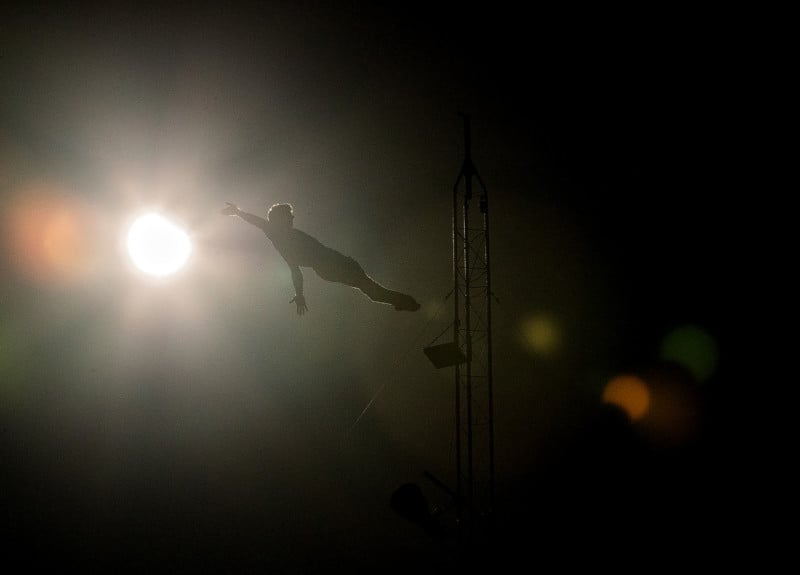 After totality, I couldn’t believe everything went so well. There were so many opportunities for this shoot to go wrong and such a short window of time to make it happen, but because our team took the time to look at every possible outcome and prepared for the worst, we were able to come away with exactly what we sought out to do during this once in a lifetime shoot.

I couldn’t have done it without the support of the amazing team at Red Bull, the divers, all of our awesome crews and people helping with the setup. Canon PRO USA for the camera equipment and lenses and Broncolor for the lighting, Kupo Grip for the clamps.

The eclipse was 2 hours long, the totality was 55 seconds, and the shooting time during totality from the first diver was just 30 seconds. It took 2.7 seconds for the diver to go from the 85-foot-tall platform to the tank, plunging 10 feet into the water.

Image credits: Behind the scenes photos by Daniel Bray