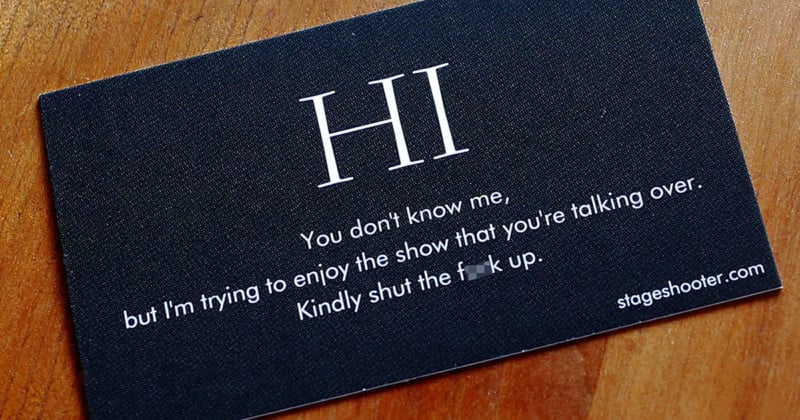 Concert photographer Rich Gastwirt came up with this unusual “viral” business card for getting his website URL into people’s hands.

It’s a simple black card that reads: “Hi. You don’t know me, but I’m trying to enjoy the show that you’re talking over. Kindly shut the f*** up.”

In the bottom right-hand corner is his domain name, which forwards to his Facebook page.

“The entire purpose is to be viral with them,” Gastwirt tells PetaPixel. “People always ask for cards at concerts and I used to make nice ones with photos, but they invariably ended up in the trash, so I figured folks would find these funny and would love a stack for themselves.”

Gastwirt had a small batch of these cards made and tested them out last week.

“When people ask for a card now, I give them a half dozen of these, and other people invariably end up receiving them,” Gastwirt says. “People pass them to loud people at shows. And the loud people post photos of them, further adding to the viral nature.

“It’s a lot easier than telling someone to shut up.”

The first batch of cards disappeared so quickly and was such a smashing success that Gastwirt quickly ordered a fresh batch of a few thousand more cards.

“I have real cards as well that I use for professional purposes,” the photographer says. “These are really just for when fans ask where they’ll be able to see my photos the next day.”

This First-Ever Solar Eclipse Photo Was Shot in 1851