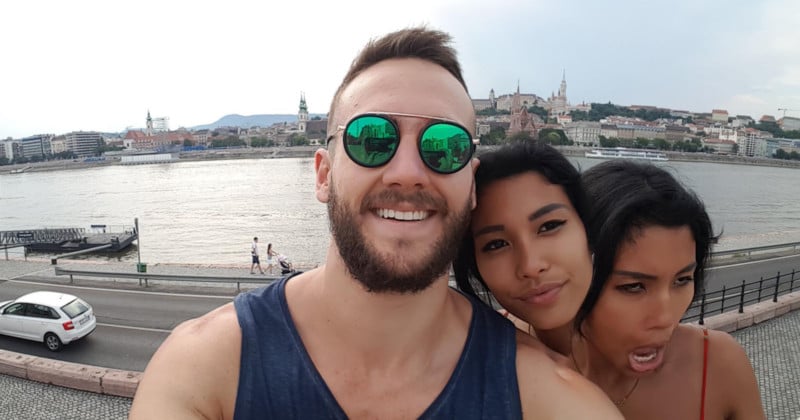 The intelligent panorama features on smartphones these days can help capture some pretty neat shots, but they can also produce some very strange results if things go wrong. Mitchell Flann and Erika Gomos were using the Wide Selfie mode on a Samsung Galaxy S7 recently when Gomos sneezed midway through the exposure. The gem above is what resulted.

“We’re Canadians from Vancouver BC and we’ve been backpacking Europe for a month and a half, and we have another two weeks to go. That photo was taken beside the Hungarian parliament building in Budapest along the Danube river,” Flann tells PetaPixel. “Erika and I have been taking wide selfies like that with my phone in almost every city and there have been some funny malfunctions before, but never like this.”

“When I first took it we were in tears laughing,” Flann says. “It was actually pretty inappropriate to laugh that hard, since we were directly in front of a beautiful memorial to the Hungarian Jews who died there in WWII.”

“Erika is really confident, and has a great sense of humor so she supported me uploading it to Instagram,” Flann says. “Reddit, however, was a different story. She was worried about turning into a meme. But once it exploded she was just in awe at how much attention it had received.”

We recently shared another example of a smartphone panorama gone wrong: in that case, it was an iPhone that turned a lake scene into the end of the world.

Learn the Science of Deep Focus and Hyperfocal Distance