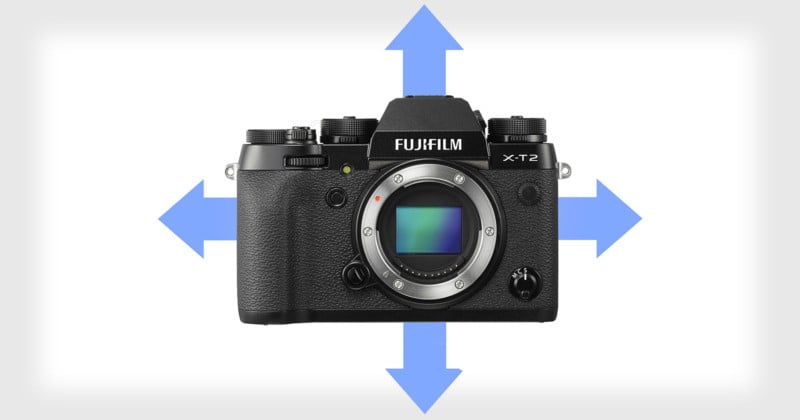 Fujifilm is reportedly working on bringing in-body image stabilization to its X Series cameras, something the company had previously said wouldn’t be possible and or/practical with its XF-mount lenses.

our XF mount is not compatible with IBIS […] for the sake of image quality. […] The diameter of our mount was designed for the image circle without IBIS. It means the amount of light at the corners is reduced when the sensor is shifted. We could correct it digitally, but we don’t want to do it: we don’t want to compromise our image quality.

To cover the larger image circle, not only mount size (and body size), but also lens size must be bigger. We are pursuing the best balance of image quality, size and weight of both cameras and lenses, operability and performance. […] we don’t think this direction will be changed in the future. Our highest priority is always image quality.

Those are some pretty strong statements, but Fuji Rumors is now hearing that Fujifilm is in fact “working to bring IBIS to future X-mount cameras.”

“Fujifilm’s main mirrorless competitors (Sony, Panasonic, Olympus) all offer IBIS… and it has become a strong selling point!,” writes Fuji Rumors. “This rumor comes from a trusted source. This is why I personally take no grain of salt at all. I’m 100% sure that these are Fujifilm’s (current) plans. I also know that Fujifilm can change plans anytime, but I have the feeling that this won’t happen this time. IBIS will come…”

If this rumor becomes a reality, photographers may see some price shifting when it comes to Fujifilm X Series gear.

“Photographers generally prefer IBIS to image stabilized lenses, because you only have to buy the technology once and it works on all lenses–including legacy lenses,” writes Improve Photography. “When the stabilization is in the lens, it tends to increase the cost of each lens by around $100.”

How To Use Photoshop’s Dehaze Tool… in CS6

How to Get Noise-free Star Photos with Starry Landscape Stacker