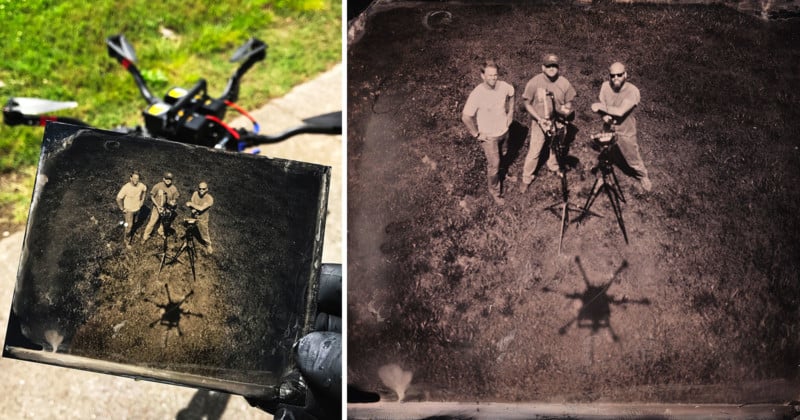 I’ve been shooting tintypes for almost six years now and love to push the boundaries of what is possible with this slow and difficult photographic process. Taking a tintype from the air was an idea that, years ago, I had shelved as the technology wasn’t there yet. Drones were pretty scarce and the ones I had seen were extremely limited in payload and stability. But this spring I decided to revisit the idea.

A Google search for “drone photography Nashville” led me to Snaproll Media. So I gave them a ring and started a conversation with Ben Linderman, the Director of Marketing aka camera/stabilization guru.

To which he responded, “we get that a lot, come down and lets see what you got.”

I should preface this by saying that I really don’t know anything about drones. While the notion of sticking a tintype camera to the bottom of a drone and taking a photograph worked well in my head, I had no idea if it would actually work.

The emulsion for tintypes is, compared to modern films, extremely insensitive to light with an ISO rating of around one. The plate must also remain wet while the exposure is being made so I only have five minutes from the time the collodion is poured to the moment the shutter clicks… which is probably why they abandoned this technology in the 1890s.

I drove a few miles south of Nashville to the Snaproll Media office to meet Ben and pilot Alan. Snaproll was one of the original 6 companies permitted by the FAA to operate drones commercially, so they’ve been at this for a while. The drones I’d seen and which most of us are familiar with are the small white DJI jobs, about 15 inches from tip to tip and with lift capacities measured in ounces not pounds. The equipment these guys use, while similar in concept, are altogether different beasts. They are huge, measuring several feet across with total aircraft/payload take-off weights up to 55lbs (~25kg, and even more outside the U.S.), batteries that could start a school bus and enough carbon fiber to make a formula one car a little jealous.

These guys have captured everything from insane footage for Red Bull’s Art of Flight and Fourth Phase films to The Rock saving bathing beauties in Baywatch and German artistry on wheels for AMG Mercedes. They use state of the art cameras like REDs, Arri’s, and Phantom Flex 4K rigs – the best in motion capture technology.

My project was going to be a pretty radical step back in time. We went over requirements for a successful tintype exposure to be made on their Freefly Alta drone. We would need a platform steady enough for a minimum of a 1/10th second exposure and a camera light and small enough to fit into the drone’s gimbal. The cameras I use to make tintype portraits are big and extremely heavy. The lightest, a Sinar F2 with attached Petzval lens tips the scale at a rather portly 18lbs (~8kg). The weight wouldn’t be an issue with the biggest of their drones but the size definitely would. So a new camera would have to be built.

I picked out my quickest wide-angle lens, an old Schneider 135mm f/4.7 in a Copal shutter, stocked up on balsa wood and glue and set to work. Once the camera was built, I coated it in black light tight paint and epoxied a 1/4-20 nut in the rear to facilitate mounting. To fire the shutter remotely, I picked out a linear micro servo stolen from an old RC plane and a radio receiver which would pair up to a spectrum DXE transmitter. This rather dubious looking rig worked surprisingly well and gave me about 1/4 mile of range. 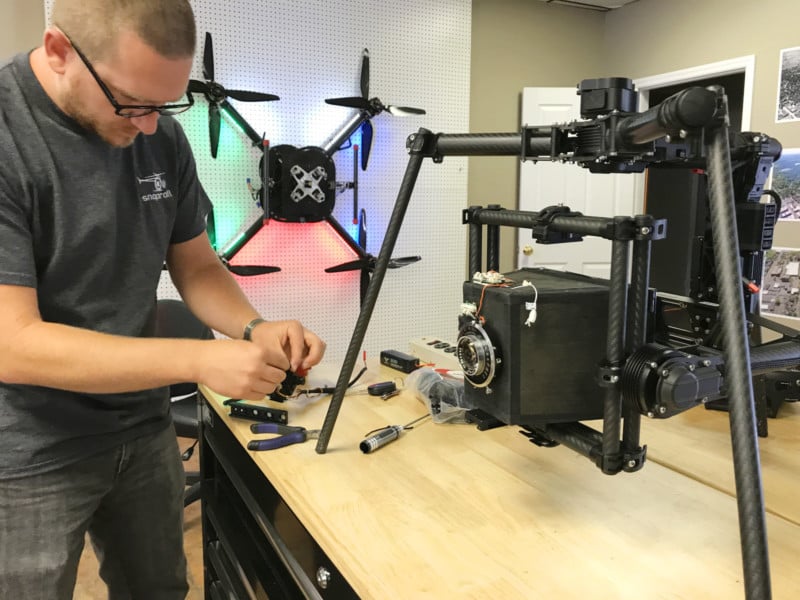 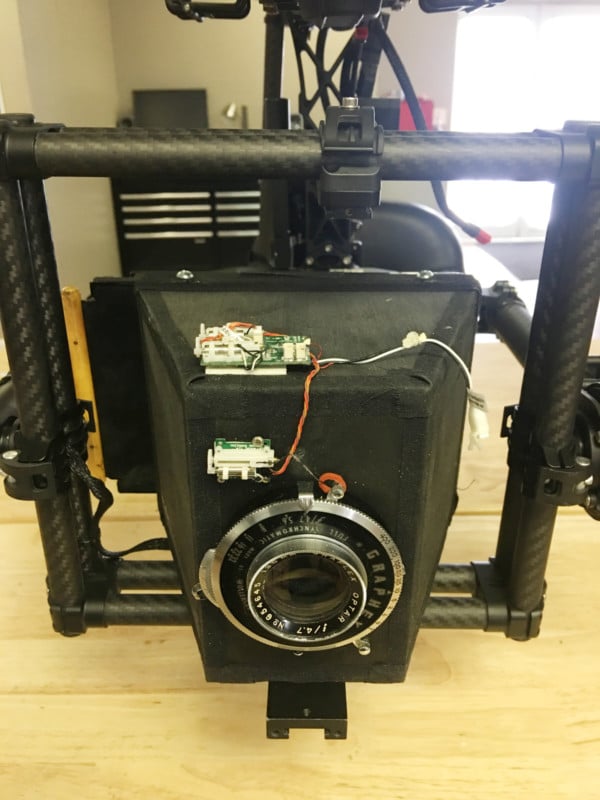 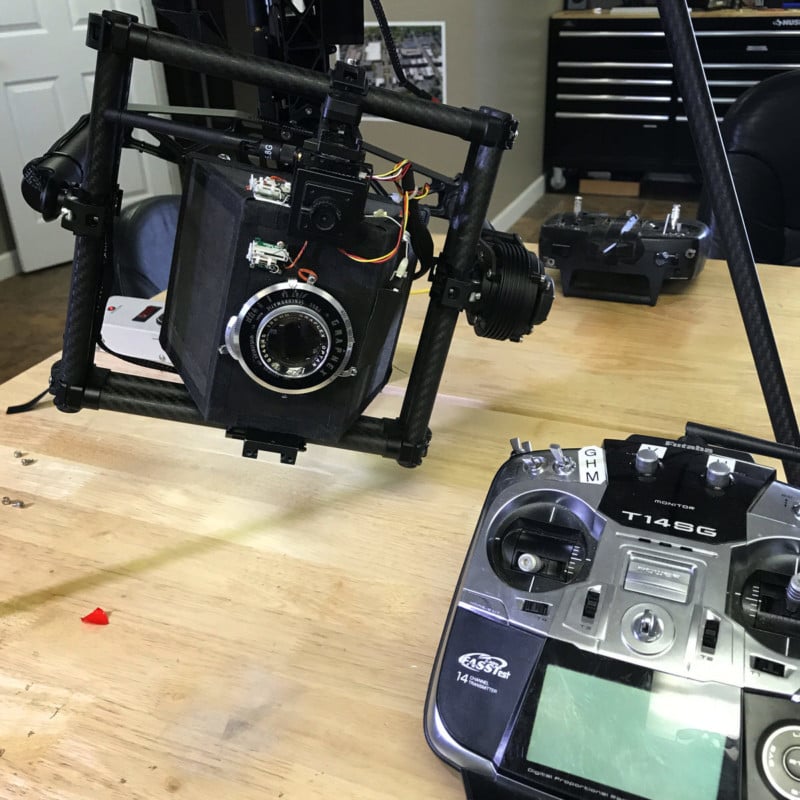 Ben and Alan carefully balanced the camera in the Freefly Mōvi (3-axis gimbal), tuned it’s motors for the lightweight payload and I headed outside to prepare the plate. In my portable darkroom, I quickly poured collodion gel over an aluminum plate and dropped it in a tank of silver nitrate. The silver adheres to the gel, reacts with the lithium bromide and ammonium iodide and becomes light-sensitive. Once sensitized, the plate was loaded into a film holder and attached to the back of the balsa camera.

The drone motors spooled up and the rig gently lifted off the ground. We watched it ascend on an FPV live feed on a small screen. Once the drone was at 200 feet and hovering motionless above a nearby lake, I flicked the shutter release switch and the worlds first aerial tintype was exposed. 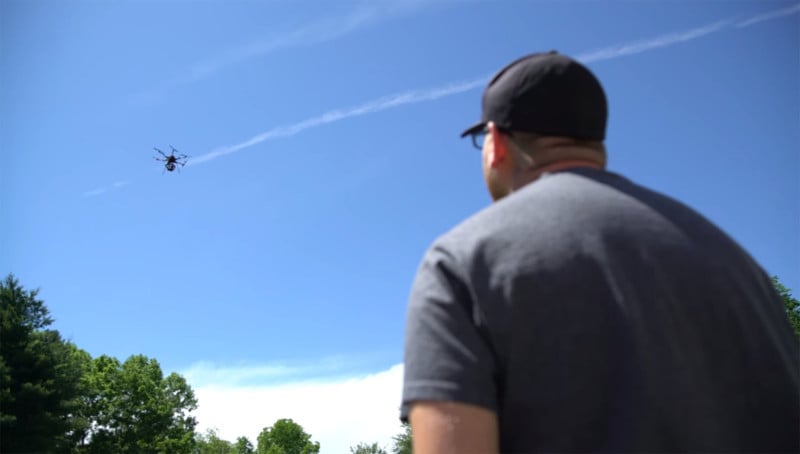 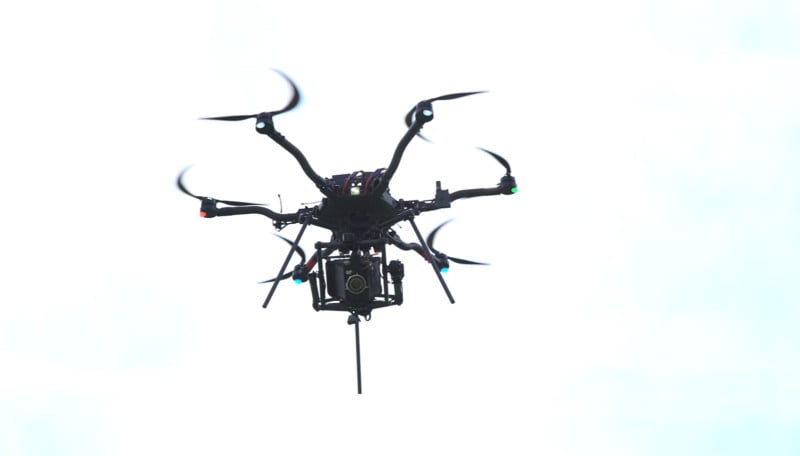 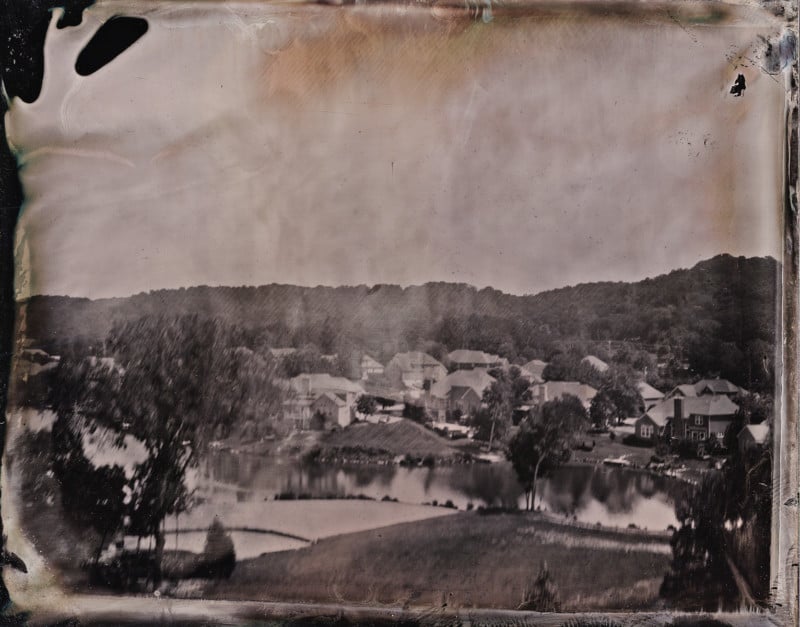 The resulting plate certainly wasn’t my best image but after having this idiotic dream for years, it was beautiful to me. I may or may not have yelled “Oh f**k yea!” when the image emerged in the fixer. We were feeling pretty good about this accomplishment when Ben pointed out that the image could have easily been taken from a tall building or a hill.

After a few minutes of head scratching Alan came up with the solution, to include the drone’s shadow in the image. Another plate poured, loaded and flown and we had ourselves another first, an aerial drone tintype selfie. 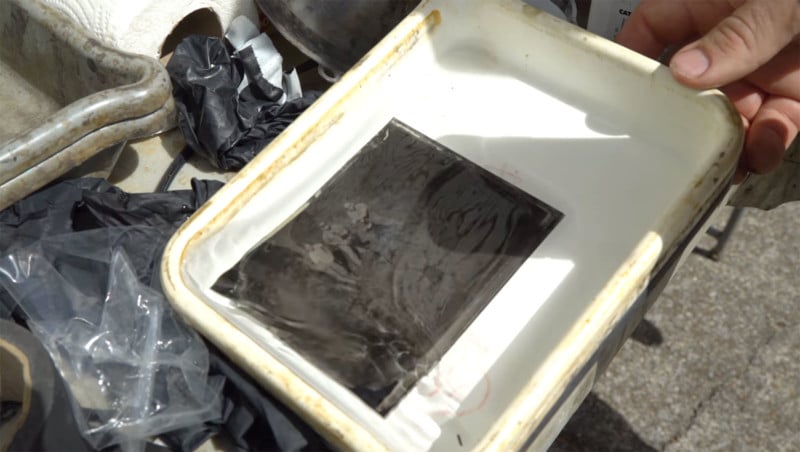 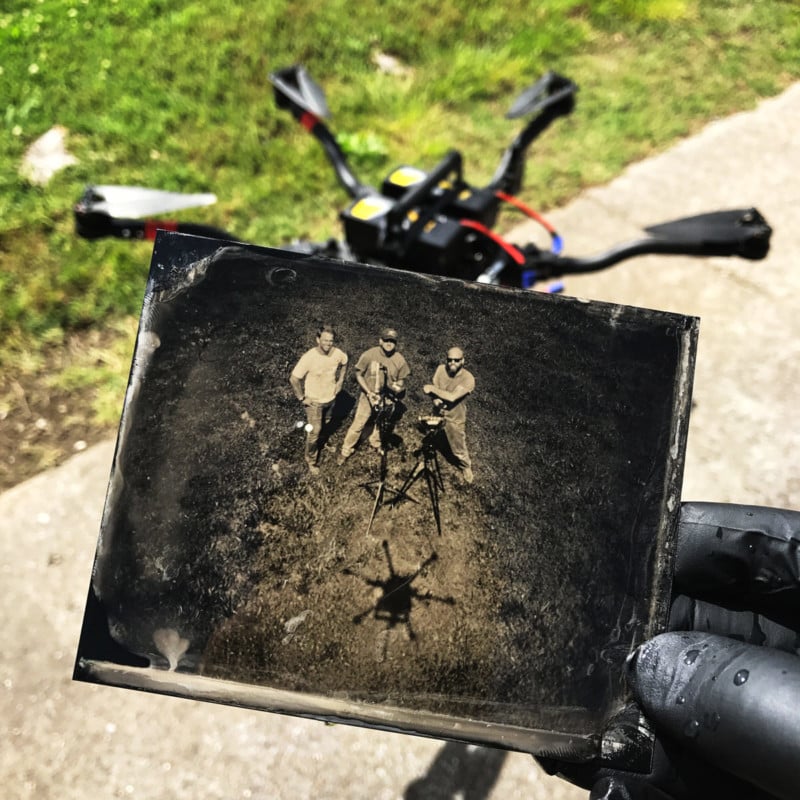 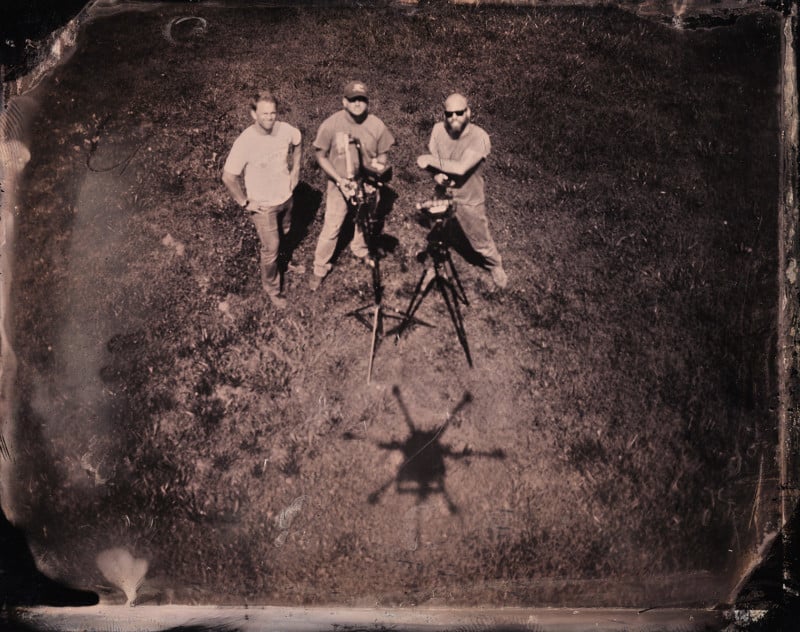 I am stoked at how well this project worked and certainly could not have done it without the expert help of the guys at Snaproll.

Plans are in the works to up the ante yet again with a larger camera and an 8×20 tintype. Eat your heart out Matthew Brady.

About the author: Giles Clement is a Nashville-based photographer who’s often found touring the country with his furry four-legged friend Zeiss and a van full of cameras and lights. He specializes in portraiture, primarily done using tintype photography. You can find more of his work on his website, Facebook, Twitter, Instagram, and Flickr.

Photos of Europe’s Most Spellbinding Libraries

StandDaddy Lets You Stabilize Stands with Weights Instead of Sandbags