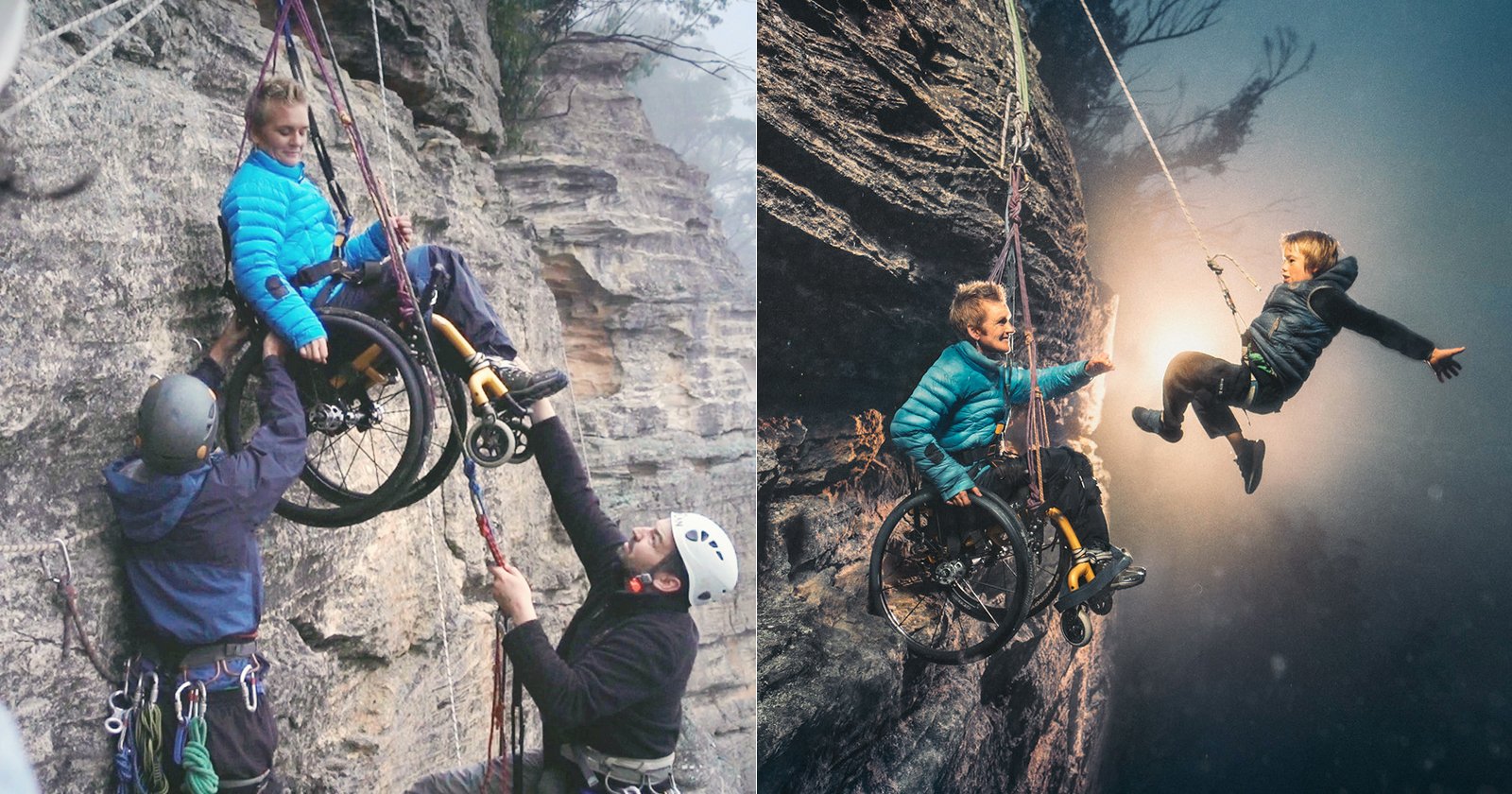 Epic. I hate that word. But when it comes to Benjamin Von Wong‘s crazy photography stunts, it’s really the one that fits best. So call it “amazing.” Call it “awesome.” Call it “adventurous” or “dangerous” or “heart-thumping.” I think hanging a paralyzed mom and her son off a cliff for some cool photos is just plain epic.

In recent years, Von Wong’s photography has taken a turn for the altruistic—photography with a cause. Whether he’s raising awareness about plastic pollution or helping fight shark finning, he looks for projects with purpose. Epic pictures only as epic as the impact they might someday have.

His recently photo shoot with the Heart Project—an Australian community venture to inspire and help others through photography—fit the bill.

For this project, Von Wong would be teaming up with Heart Project founder Karen Alsop, a talented Photoshop artist, to try and help quadriplegic mother Sarah-Jane (SJ) reconnect with her son Hamish.

For most of her life, SJ was the consummate adventurer. She rock climbed, taught rope rigging for a living, biked across Australia, and so much more. Then, when Hamish was just 4 years old, a routine operation for a bulging disk in her spine left her paralyzed… a quadriplegic with no use of her lower body and limited use of her upper body and arms. Ben explains in a post on his blog:

The accident happened when Hamish was only 4 years old. His mother and hero was suddenly unable to take him to have the wonderful experiences he had gotten so used to.

We wanted to help bring some of those experiences back.

Together with an awesome team of volunteers and professionals from the Blue Mountain Adventure Company, Karen and Ben took SJ and Hamish into the Blue Mountains where they proceeded to dangle the duo off a rock face for the sake of awesome photography… but not before Von Wong himself stepped in as guinea pig.

“Blue Mountain Adventure Company, our safety riggers wanted to test the rig out on someone that was able bodied first,” he writes. “That someone, was me.”

To Ben’s delight, the rig held and the crew were soon lowering SJ, Hamish, lighting equipment, and Von Wong off of the side of a cliff to capture just two frames. The weather wasn’t cooperating, making it a bit more challenging than it might have otherwise been, but in the end, Von Wong delivered the goods.

Here are the two shots he captured, helping SJ connect with Hamish on their first adventure since she came out of that surgery 4 years ago. 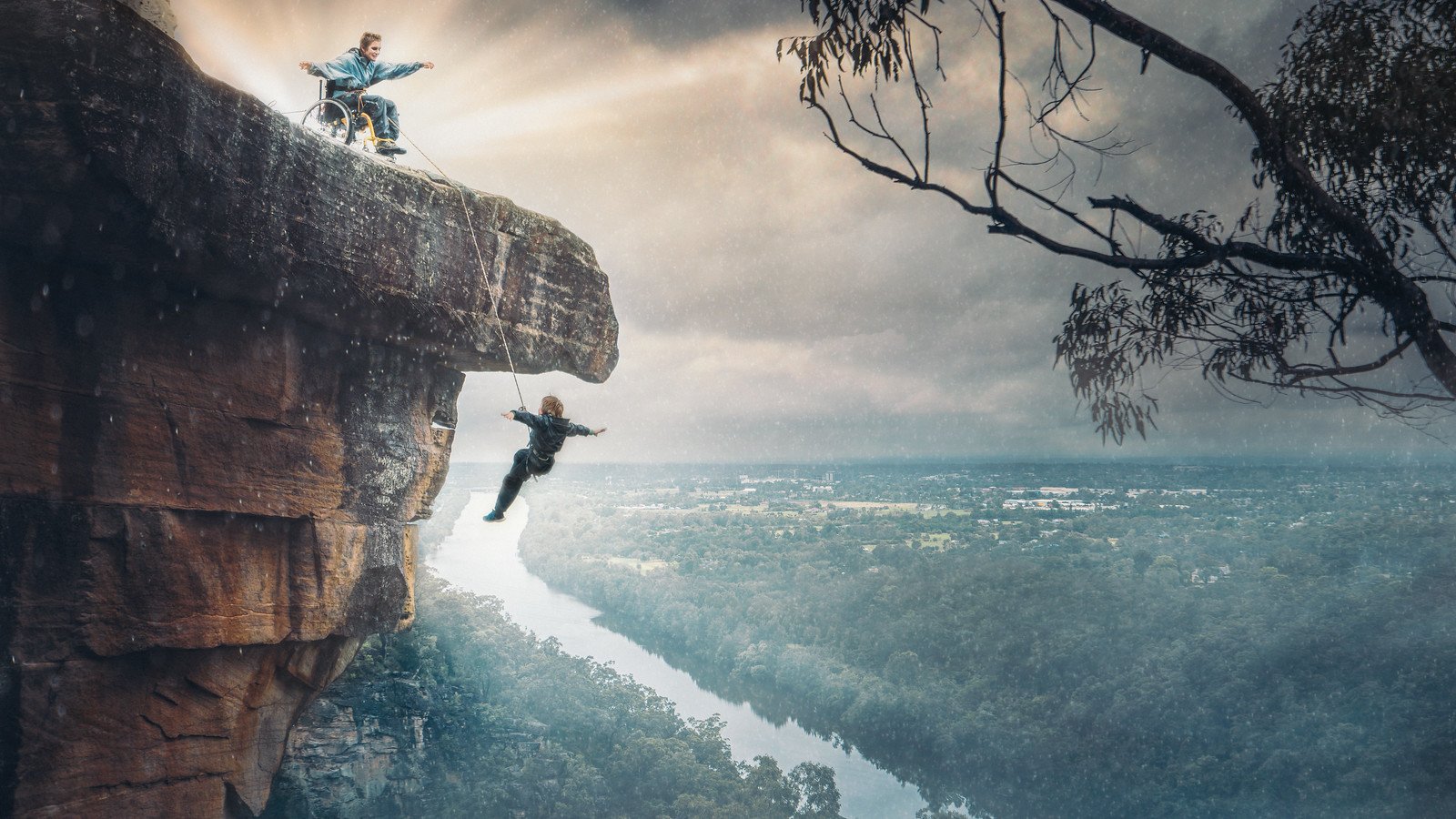 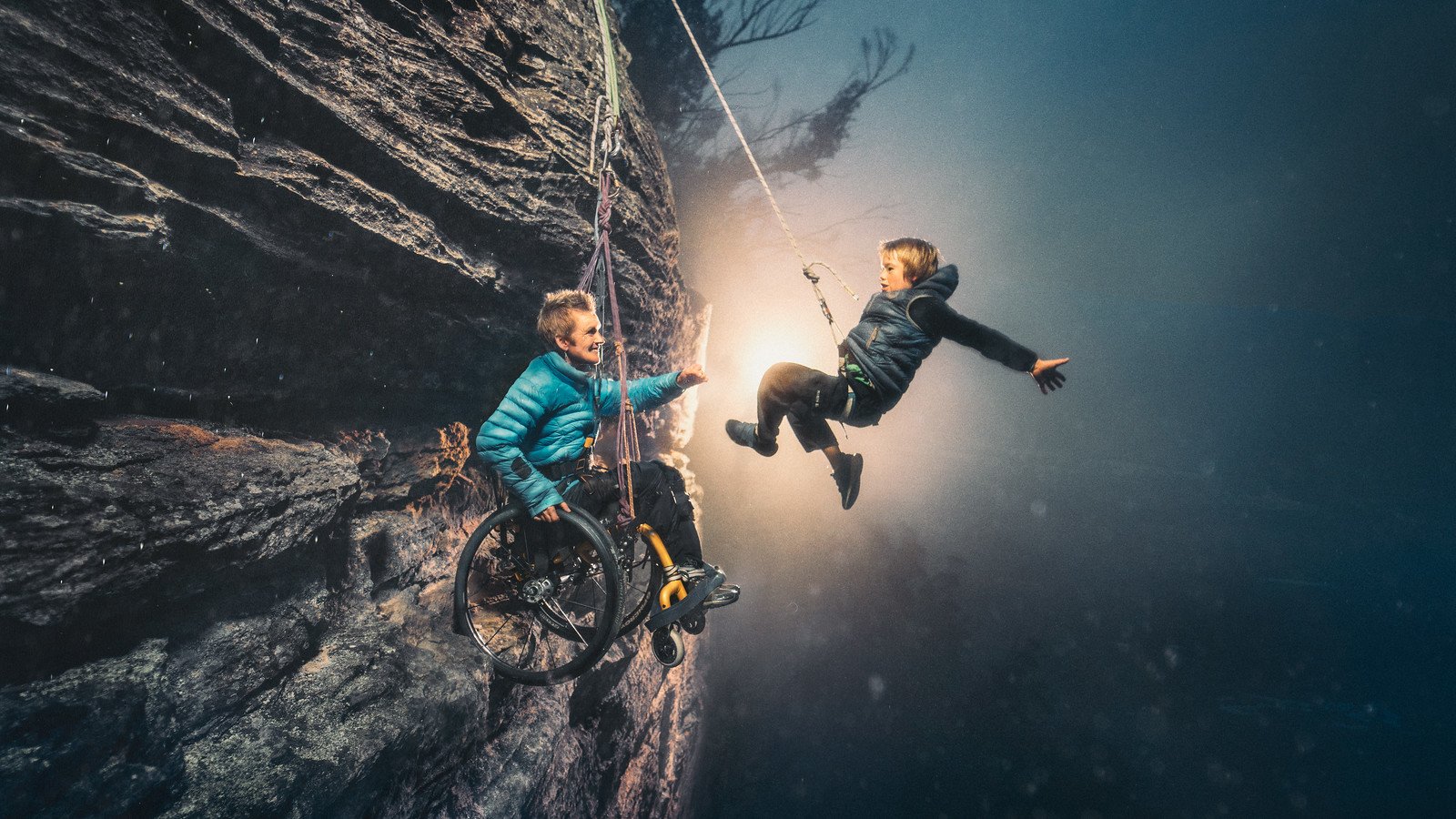 The project then continued in the studio, Karen taking over to Photoshop SJ and Hamish into some out-of-this world adventures, which she shares on her own website here and in the video below:

For her part, SJ is taking this Mother’s day project and the publicity it’s generating, and trying to put it to good use. With help from Karen and Ben, she’s started a GoFundMe campaign that seeks to improve the accessibility of the Blue Mountain community where SJ and her family live.

“Crowdfunding money will go towards making the community more wheelchair-friendly and accessible. From installing ramps and bumpers to creating custom furniture,” reads the page. “The cost of ramps can range from $1000 – $10000, so this goal is just a start, but we hope to far exceed it and enable SJ to make huge improvements to accessibility in her community.”

So if this photo shoot touched you and you want to help SJ and others like her, follow this link and consider donating something if you comfortably can. And, of course, if you want to see more of Ben’s epic (yep… I said it) photography, visit his website and blog or give him a follow on Facebook and Instagram.

Image credits: All photographs courtesy of Benjamin Von Wong and used with permission.