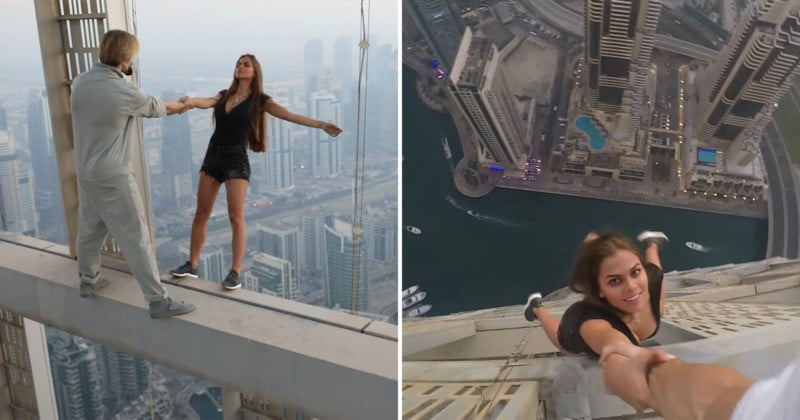 Russian model Viktoria Odintsova is being harshly criticized online for a photo shoot she did that involved handling by one arm from the edge of a 1,000-foot-tall skyscraper in Dubai… with apparently no permission and no safety equipment.

In videos and photos published on YouTube and on Instagram, the 22-year-old model can be seen holding onto the arm of a male experienced daredevil assistant. In one photo she’s leaning backwards off the edge of the Cayan Tower (the world’s tallest twisting building back in 2013) and in another shot she’s dangling by an arm clasped tightly onto the male assistant’s.

Videos were also posted, showing an anxiety-inducing behind-the-scenes view of how dangerous Odintsova’s stunt really was:

Of the thousands of comments posted so far, a large number of them are critical of Odintsova’s stunt. Many of the responses accuse Odintsova of recklessly risking her life and setting a dangerous example for the 3.2 million people who follow her on Instagram (warning: NSFW), all for a set of viral photos and for attention.

“The stupidity of people today has no heights﻿,” writes one commenter on YouTube.

“The stupidest and most desperate attempt for attention ever done,” says another. “Sending a VERY WRONG message to many young people around the world.”

With the rise of social photo sharing and with “rooftopping” photography, there have been stories in recent years of young people who fall and die while attempting this type of extremely dangerous stunt. Just in 2015, a 24-year-old photographer died after falling from a 52-story building in NYC and a 17-year-old Instagram daredevil died in Russia after falling 9 stories.

(via Viktoria Odintsova via Mashable)

Update on 2/18/17: The Cayan Group has published a statement that “strongly condemns” the model’s student and says it’s taking legal action against her. Here’s the text:

Cayan Group, the leading property developer in the Middle East strongly condemned Russian model Viki Odintcova’s daredevil stunt of hanging off the edge of the Cayan Tower roof without any restraints, or safety precautions.

The stunt was carried out without the approval or permission of authorities at Cayan Group, and is in no way a reflection of the Group’s commitments to art, creativity, and the human spirit. ‘’Although the Cayan Tower has been periodically used for extreme sports events, in all cases there has been safety, security, and emergency services on site. We have a process of selecting trained professionals skilled at their craft, especially these high-risk life-threatening events, and carry out a stick review of the safety measures and backup safety measures before approving the event,” explained Gizel Daher, Director of Marketing & Communications.

The model and her assistants had not sought permission or approval, and had expertly breeched security to perform the stunt. “Under no circumstances can we condone Ms. Odintcova’s irresponsible actions, and we are in the process of reviewing our security procedures to understand and rectify where the lapse occurred and how to prevent such in the future,” Gizel Daher said.

An immediate legal action is running against this condemned incident and the sentence will cover the involved breachers at all levels.

Fake News in Mainstream Media: My Experience as a Photographer