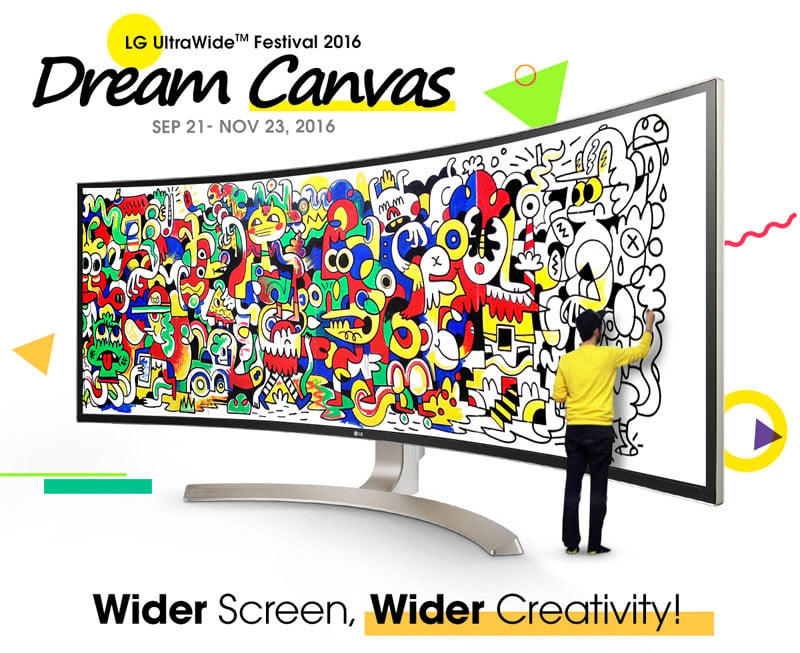 Want to upgrade your photography workstation? You can do so in 3 easy steps. Simply (1) create a 21:9 photograph, (2) upload that photo to your social networking page, and (3) visit this competition website and get a new creator workstation worth $10,000.

Sponsored: This is a sponsored post by LG for the LG UltraWide Festival 2016: Dream Canvas.

As a photographer in the digital age, having a top quality monitor is essential for reviewing and editing your photos. Which monitor you pick can have an impact on both the quality of your work and the efficiency with which you work. To celebrate the achievement of this revolutionary display, LG is hosting a creative competition with a workstation worth $10,000 as the grand prize.

The LG UltraWideTM Festival is an online festival that reflects LG UltraWide Monitor’s to improve your digital creativity with an ultra-wide display. In 2015, the festival featured 3 tech YouTubers helping 3 contestants turn their dream computer setups into a reality.

This year, in 2016, LG is launching its second festival, with the new LG UltraWide as the centerpiece. This second festival is geared toward photographers and other digital creatives. You can enter by submitting an original 21:9 ratio photo from September 21st through October 4th. Three judges (top creatives) and the public will judge the submissions from October 5th through October 18th.

The first round of the contest will involve linking through social media to each entrant’s 21:9 artwork with special hashtags (#LGUltraWideFestival, #DreamCanvas2016, #38UC99). 15 finalists from the 1st round will announced on October 20th and be given a new LG UltraWide 38-inch monitor 38UC99.

For the final round, you’ll be tasked with creating a wallpaper that fills up the gigantic 3840×1600 screen of the new 38UC99 monitor. The final winner will be chosen after an assessment from November 9th through November 22nd, based on a combination of judges’ scores, public download, and LG’s in-house evaluation team scores. The final winner will announced on November 23rd and will be awarded $10,000 worth of Dream Creative Desk Gear, in a combination of the winner’s choosing. Yeap, $10,000 worth!

As the winner, your work will also be posted on the Dream Canvas Campaign’s official website, along with social media, and hundreds of global media outlets. What’s more, the final winner’s work will be showcased at the LG monitor exhibition booth in the world’s biggest consumer electronics show, CES, in Las Vegas 2017! LG will provide the winner with airfare and accommodations for CES in Vegas.

LG’s new 38UC99 UltraWideTM monitor is a dream canvas for the creative photographer, and the new festival and contest is supporting digital creatives by giving away a dream workstation and by helping to show their artwork to a large global audience.

If you’re interested in winning one of LG’s giant new widescreen monitors, and possibly a $10,000 workstation, pay a visit to the festival’s website today. The contest is open for submissions from September 21st through October 4th.

Here Are the First Real-World iPhone 7 Plus Photos: NFL and US Open