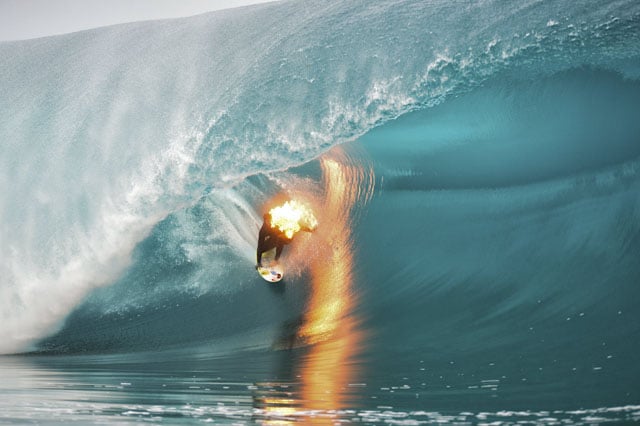 How do go about making photos of big wave surfing even more extreme? Here’s one way: add fire to the mix. Surfer Jamie O’Brien recently tackled some of the world’s heaviest and dangerous waves while wearing a wetsuit that was set on fire. Photographer Tim McKenna was on hand to capture the stunt.

O’Brien says he originally got the idea after a fan sent him a message through Instagram, suggesting that he should light himself on fire and “get barreled at Teahupo’o.” Teahupo’o is a village on Tahiti, French Polynesia, that’s known for having huge, heavy waves that break on extremely shallow (and dangerous) coral reef.

So, O’Brien teamed up with Red Bull, assembled a team of 20 people, and attempted the stunt. Here are the photos that resulted:

“The whole barrel lights up fluorescent orange! It’s this really crazy feeling,” O’Brien says in an interview with Red Bull. “Usually in the barrel everything slows down and you don’t hear anything, but the noise of a flame in the barrel is incredible. You can’t really describe it.”

Here’s a short video of the same stunt:

“It’s not an easy process, even for a team of professional stunt coordinators, safety personnel and surfers, but when each step is performed correctly, the final product is a brilliantly illuminated surfer in the middle of the dark ocean,” Red Bull says. “In short, don’t try this at home.”