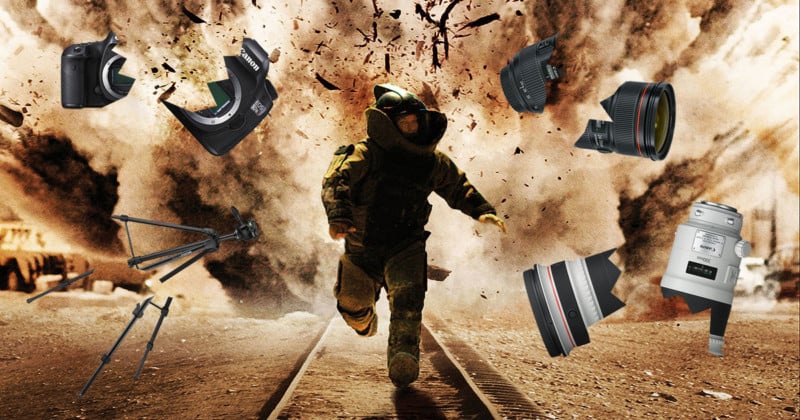 Some poor photographer in Kansas City, Missouri, accidentally left their camera bag outside city hall yesterday. Someone noticed the “suspicious package” and alerted police, who then sent a bomb squad and blew the camera bag up. Oops.

The Kansas City Star reports that security guards noticed the black case at about 3:40 a.m. Monday. Police were called to the scene, and the Bomb and Arson squad detonated the case at around 6:30 a.m.

How the story transpired was captured in a series of Tweets by reporters:

Several blocks around city hall blocked off.
Police found a suspicious package on the steps south of city hall. pic.twitter.com/bDV05GZbrf

Bomb squad has sent out their robot to check out the suspicious box near city hall.
Several streets shut down pic.twitter.com/vF6KvcuyOJ

These roads around city hall are blocked off due to a suspicious package on the steps south of city hall. #KCTraffic pic.twitter.com/lgaizOBOSy

After blowing the “suspicious package” up — an explosion that sent “bits of debris” flying everywhere — the police examined the devastation and concluded that the “bomb” was actually a tripod, camera, and photo equipment.

Statement from @kcpolice on suspicious package found south of #KC City Hall. Turned out to be camera equipment pic.twitter.com/MoBmrGdizM

So far, no photographer has stepped forward to claim responsibility for forgetting their pricey camera gear outside city hall and causing the bomb scare. Hopefully they have an insurance plan that covers “controlled detonation.”

What It’s Like to Shoot the Republican and Democratic Conventions