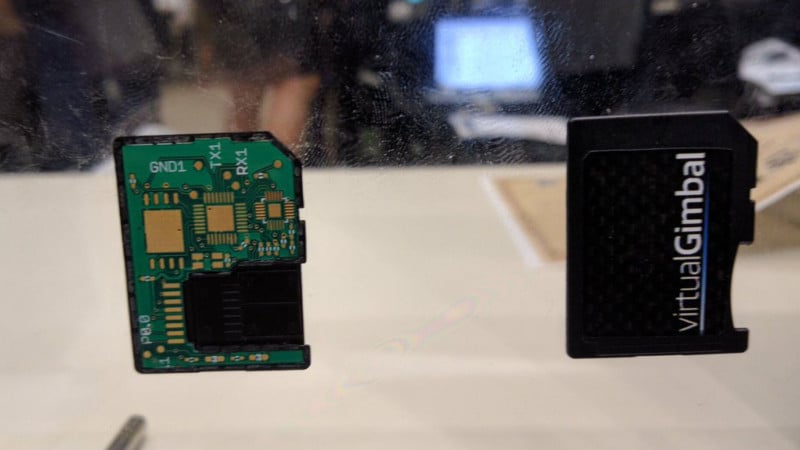 virtualGimbal is one of the most interesting little devices we’ve ever come across. An SD card with a gyro built right in, the device does double duty by capturing your footage while it also captures the movement of your camera for better electronic stabilization in post.

We first learned about the device over email, when a PetaPixel reader who attended Maker Faire Tokyo this year tipped us off and gave us the creator’s email address. We got in touch, and today we finally heard back from Yoshiaki Sato.

“virtualGimbal is a microSD to SD adapter that contains a 3-axis gyro sensor,” he told us. “It measures the angular velocities of camera while recording video, so users can stabilize videos after using the angular velocity data by PC.”

And it works. Here’s a side-by-side comparison Mr. Yoshiaki uploaded to YouTube:

Using an external device full of sensors to help stabilize footage later in post is not a new idea—SteadXP, for example, did much the same thing—but nothing we’ve ever seen is this compact or multifunctional.

virtualGimbal is recognized as a normal SD card by your camera, and any footage you capture is sent straight to the regular microSD card you’ve loaded inside. But at the same time, it’s collecting movement data for use later.

The gadget is used in conjunction with post-processing software that Mr. Yoshiaki developed himself, and which he claims works “very fast.”

“The stabilization process works in real-time up to 1920 x 1080 at 30fps,” he explained to us over email. “So, users can adjust zoom (trimming) ratio and intensity of video stabilization while playing the video.” Together, the sofware/hardware combo seeks to replace heavy optical stabilization equipment for those who don’t want or need to purchase a full-blown brushless gimbal.

For now, it seems the tech is still in the prototype phase—the engineer didn’t say when it would launch or how much it would cost when it does. But the proof-of-concept is exciting to say the least. An easy way to better stabilize footage for any camera that can take an SD card? Yes please!

Advice from One of the World’s Best Photographers: Embrace Discomfort

A Classic Photo Book Transformed Into an Adult Coloring Book