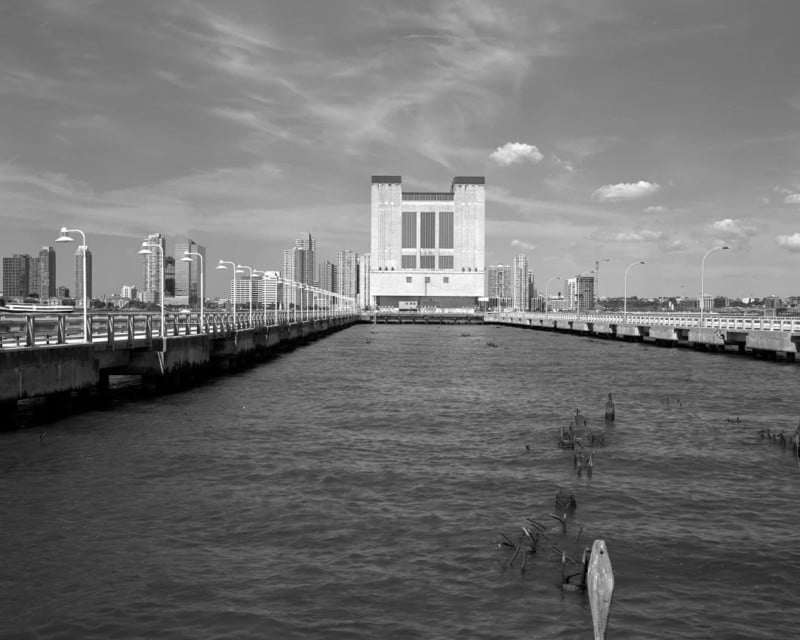 I don’t think the Port Authority would like it if you looked at this photo.

Yesterday I spent my morning taking some photos in New York City along the Hudson river with my 4×5 camera. Very relaxing. I had one sheet of film left, and I noticed that some nice-looking clouds were developing over the Hudson.

I only had normal and wide-angle lenses with me, so I needed a subject, and I found one: the ventilation building for the Holland Tunnel. A majestic, boxy, weathered building, sitting on the calm river, amongst some wispy clouds, perfectly illuminated by the mid-morning sun.

I know the Port Authority (the owner of this building) hates photographers, but this is not their property, and despite many “no trespassing” signs on the piers (one of which is a jogging path), there were no “no photography” signs. So I began setting up my shot.

Someone driving their SUV on the sidewalk stopped to yell at me.

“The Port Authority wouldn’t like it if you took that picture.”

I examined this gentleman’s badge. Not a police officer. Just some random Port Authority employee.

“Are you going to call the cops?”

“That’s up to you. You look like a professional, so you should know better than to photograph this.”

“There are thousands of photos of this ventilation building on the Internet.”

“That’s their problem. Why don’t you take a nice picture of the WTC?”

He sat in his car until I took down my tripod and walked away.

I sat down for a while to calm down and decide what to do next. I looked up the Port Authority’s photography policy on my phone… they don’t publish one. Ironically, the first result was for a photo contest that the Port Authority ran (TLDR: WTC only).

Some other people on the Internet had similar experiences, and didn’t take the photo. Someone in 2013 had been arrested in the subway for taking photos, ended up suing the city, and won $30,000.

I watched the employee drive out to the end of the pier, get out, and look back in my direction.

I watched several joggers stop at the same place I was going to take the photo from to stop and take a photo.

It was decided, I was going to take this photo; however, I was not going to take my time taking the photo. I was going to set up my camera, level it, and press the shutter. From my bench, I took my usual light meter readings through a red filter (to darken the sky). I got out my camera, and focused it on infinity, and decided on an exposure of 1/4 second and f/16, with no camera movements.

I attached my camera to my tripod, extended the legs to about where they would be needed, rotated the ballhead to make two legs parallel to the railing on the wall, and walked over. I leveled the camera, checked the focus one last time, took the picture, and quickly vacated the scene.

Not a perfect photo (good job centering the building), but it sure means something to me. The Port Authority’s policy is not law. This is a public place, and I can photograph whatever I want.

I will be back to improve this photograph. F**k the Port Authority.

About the author: Jonathan Rockway is Brooklyn-based software engineer at Google. The opinions in this post are solely those of the author. You can find more of Jonathan’s work and words by following him on Google+. This story was also published here.

This Wedding Photographer’s Custom Strap was Made from a Bison

Advice from One of the World’s Best Photographers: Embrace Discomfort