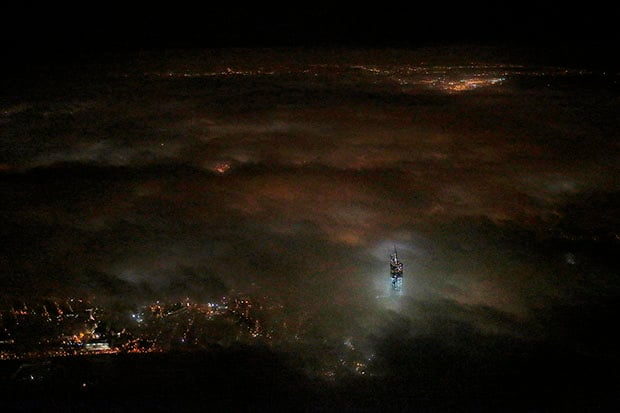 This photograph shows the One World Trade Center poking up above clouds above New York City. Photographer Matthew Ziegler shot the photo last Monday from the seat of an airplane, sold it to the Associated Press, and then saw it appear in photo slideshows on news websites across the Web.

Ziegler tells us that he was on a plane from Florida to LaGuardia airport, and was heading north over the Hudson river. He had his camera on his lap, since he wanted to photograph the stars that he had seen on the way down to Florida.

As the plane made a turn at the southern tip of Manhattan, every on one side of the plane suddenly pressed their faces against in the windows after seeing the WTC illuminating the top of the cloud layer. Ziegler writes,

After we made that bank over the bay there it was. Just sticking out through the clouds. It was pretty surreal. I could see out of the corners of my eyes that everyone had their faces up against the windows in the seats in front and behind me (sorry for the guy sitting next to me. He probably didn’t get to see it with me in his way!) As quickly as it came it was gone.

I didn’t have much time to make camera adjustments because it all happened so fast. I was at ISO 6400 because I had been shooting people in the cabin because I was bored during the flight in addition to trying to make those stars pictures which didn’t work at all like I thought. I was at f/1.4 on a fixed 35mm underexposed about three stops. Although these probably weren’t ideal settings being underexposed help keep the building sharp since we were so low and moving so fast. The original version is quite dark, but I think that’s better than over exposed and blurry. So that was that! 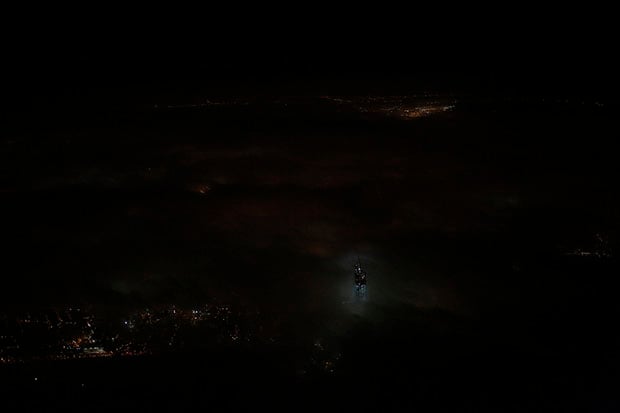 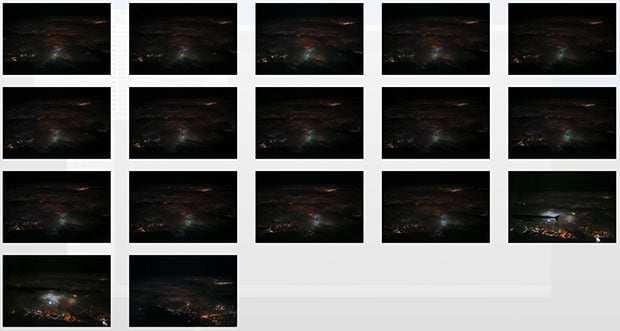 Here’s what he tells us about how the photograph was sold to the AP (his first sale to the agency):

I connected with a photo editor at the AP about a year ago. I was looking to get some more freelance work, but they couldn’t offer any at the time. We had a brief face-to-face after that just to touch base and meet one another. I kept in touch here and there and actually sent photos in a similar fashion during Sandy, but none of those were worthy of being published. I got in late Monday night and thought I should try sending the photo out. Tuesday I sent the photo to the editor. My phone rang 5 minutes later. He was on the line and wanted to buy the photo from me. The photo went on the wires Tuesday afternoon and by Tuesday night/Wednesday morning it started to make it’s way around the web which was pretty cool. Definitely an exciting first for me. Hopefully the first of many.

So that’s how a photo goes from the seat of a plane to the Associated Press, and from the AP to news sites on the Internet.

You can find more of Ziegler’s work on his website and on his blog.

Image credits: Photographs by Matthew Ziegler and used with permission