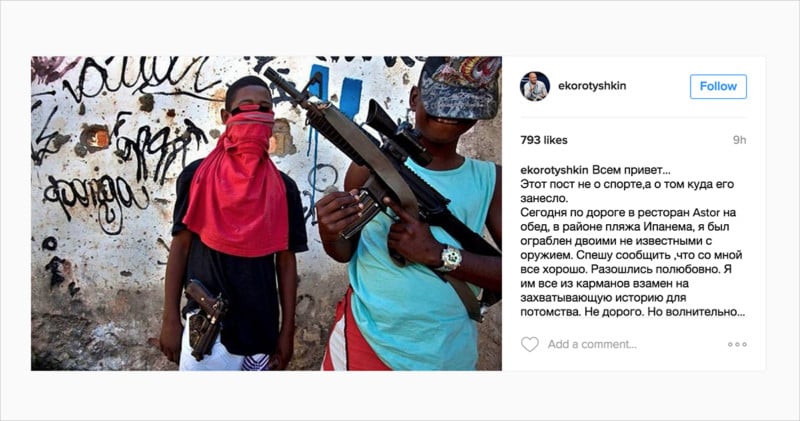 UPDATE: It turns out the photo IS indeed fake. It has been used since 2015 to illustrate several pieces we were able to find online about the gangs of Brazil. Thank you for PetaPixel reader Gabriel Nogueira for finding it online. The headline has been changed to reflect the true story, and we sincerely apologize for not debunking the story before publication.

Korotyshkin, who retired just days before the 2016 Russian Olympic Trials, is in Rio watching the games, taking pictures with friends and former rivals.

“This post is not about sport, but about where it failed,” writes the former Olympic swimmer in the photo caption. “Today, on the road to Astor restaurant, near Ipanema Beach, I was robbed.”

He goes on to assure his fans that he was okay. He claims the gun-toting teenagers who mugged him were “friendly,” all things considered. “I emptied my pockets in exchange for an exciting story that I will remember,” he writes. “It wasn’t expensive, but it was exciting.”

The photo has come under scrutiny by fans who can’t understand why the muggers would pose for a photo after attacking him, so we approach the image with skepticism (SEE UPDATE). However, given the stories of theft already coming out of these Olympics,

If you’re in Rio, and especially if you’re toting expensive photography gear, be very careful.

Hacking a 19th Century Lens Onto a Sony a7S