We’ve shared a few very bright lights in the past that can turn night into day—even a crazy 1000W DIY version you can build yourself—but this 20,000W incandescent lightbulb makes all of those look like the pen light on your keychain. At full power, it can turn night into blinding white.

20kW halogen light bulbs like this are used on professional film sets and in industrial settings, but until now we’re not sure anybody has been crazy enough to try one out at home or in their backyard. Fortunately, the guy over at Photonicinduction YouTube channel is just crazy enough (and properly trained enough) to do it.

After hooking up some heavy duty electrical power to this monster of a light bulb, he takes it for a test both inside and outside of his “lab”—an incredibly dangerous feat not just because of the sheer power going through the massive filaments inside the bulb, but also because of the roaring heat it creates.

“That is unbelievable,” he says after cranking it up all the way to 20,000W for the first time. “It’s like having a bonfire in the middle of the room.” 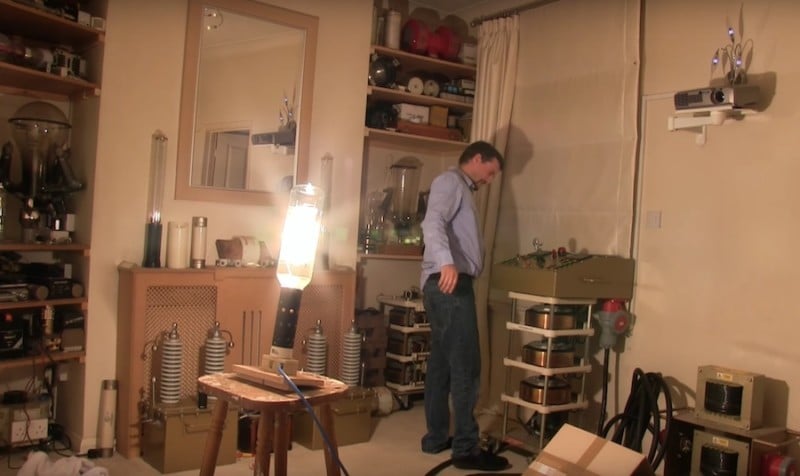 With autoexposure on, the camera compensates for the spike in brightness but when he switches to manual exposure you can see just how bright things get in that room.

Even outside, when pointing the camera away from the bulb, at full power you can barely see anything. And the final shot, captured from a little distance away in front of the house, shows you how the bulb turns his backyard from a normal evening into something out of Close Encounters of the Third Kind.

Which just leaves one question: what in the world is his electric bill going to look like this month?