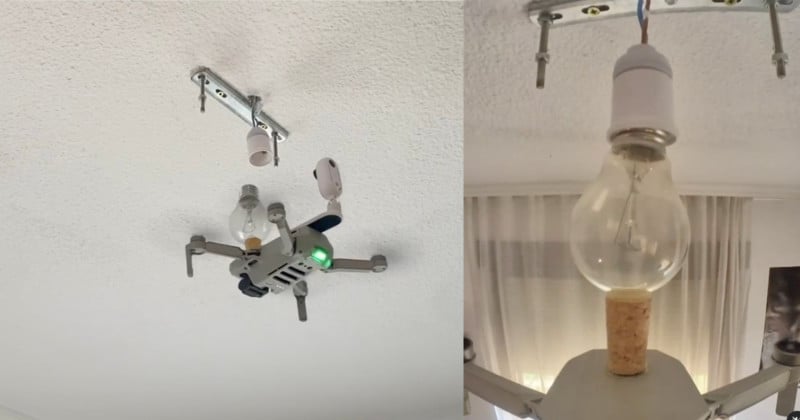 The short video below (uploaded by Insta360) is set to the sounds of the climactic docking scene from the movie Interstellar. The pilot has fitted a lightbulb on the top of the drone attached to a wine cork that was stuck to the body of the quadcopter. To get a better view of the action, a small mounted Insta360 action camera was mounted on top of the drone, pointed towards the bulb. This additional camera allowed the pilot to get a better perspective on the exact position of the bulb in relation to the socket on the ceiling of the room. 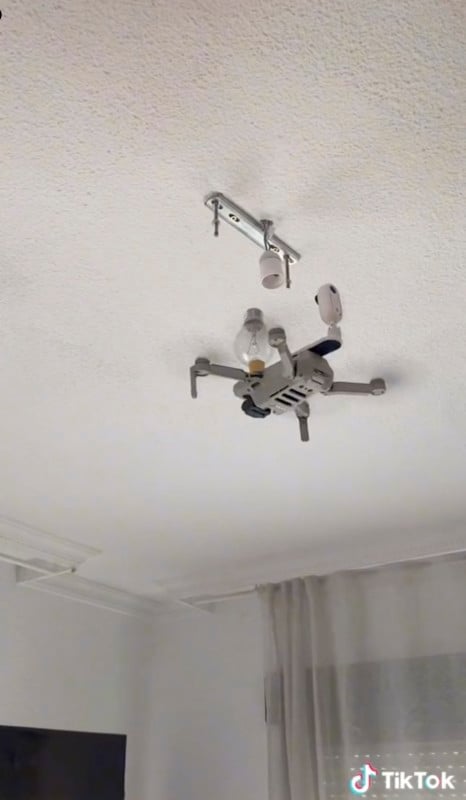 The pilot is cautious in their approach as one wrong move and the rotors of the drone could hit the light fixture which could cause the whole device to fall to the ground, breaking the blade(s), the lightbulb, and drone. After some careful indoor maneuvers navigating through what looks like a living room, the pilot makes their approach to the light fixture above.

Once the drone is in close position, the pilot used the Insta360 action camera to see where the threads were on the fitting and bulb so they could align them properly for a quick fit. After some very careful adjustments to ensure the blades of the drone didn’t make contact with the light fixture, the pilot made their move by increasing the altitude quickly putting the bulb right into the socket.

Once in the fixture, the pilot started to spin the drone to tighten the connection and after a couple of rotations, the light bulb glows to life.

The video has been viewed more than three million times on TikTok and nearly half a million views on Instagram. It doesn’t hurt that TikTok uses audio from the movie Interstellar starring Matthew McConaughey going through a “similar” risky and complicated docking procedure. The only thing viewers are left wondering is how the pilot detached the cork from the lightbulb and landed the drone safely back on the ground.