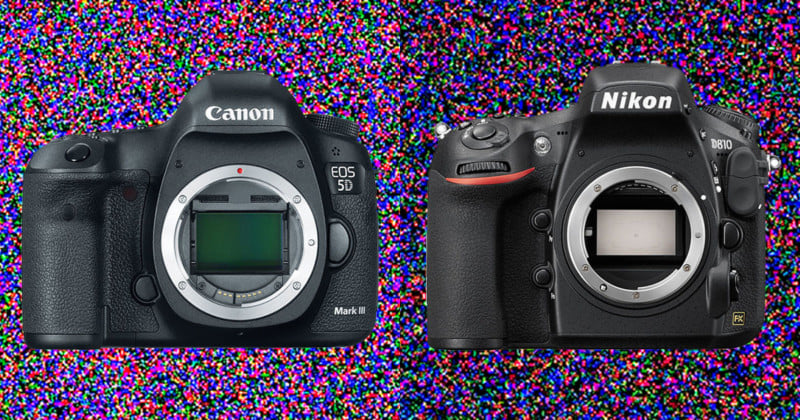 Cameras are often pitted each other in the area of image quality, but long exposure sensor noise generally isn’t something that you can easily compare online. So photographer Brendan Davey took it upon himself to create such a resource, and the Sensor Noise DB is what resulted.

As a photographer who shoots a lot of nightscapes and auroras, Davey values cameras that have minimal noise when shooting long exposures at high ISOs. To find the baseline performance of cameras, Davey shoots long exposures with a body cap attached instead of a lens.

For each camera he tests, Davey shoots 3 different exposures at 1 second, 30 seconds, and 300 seconds (i.e. 5 minutes). Other factors are held constant: no light is entering the viewfinder, the environment is room temperature, ISO is set at 3200, NR is off, and RAW capture at max bits per channel.

To compare the results of two cameras, simply select them from the dropdown menu on Davey’s database. Here’s the Canon 1D X versus the Nikon D4:

Davey tells PetaPixel that his tests have yielded some interesting observations. One is that cameras often perform well at 1 second and 30 second exposures, but very badly in 5 minute exposures (such as the two cameras above).

For example, the Nikon D7100 is very bad at shooting long exposures at high ISOs:

“I’m sure astrophotography is not a priority for companies, and the 1Dx is no doubt awesome for shooting general low light work,” Davey says. “After all, what wedding photographer or sport photographer is going to need sub 1 second times?”

Davey also found that some cameras appear to be performing extra noise reduction on photos regardless of camera settings.

“A good example of this is the Fuji X-Pro2,” Davey tells PetaPixel. “It appears that the sensor actually gets better with longer exposures. Mmm… ok.”

The database also shows that spending more money doesn’t always give you better results in this department. Since some camera models share the same (or similar) sensors anyway, there can be little to no difference in the test results despite the difference in price tags.

If you’d like to see how your camera stacks up in sensor noise compared to other bodies out there, head on over to the Sensor Noise DB and look it up.

Making a Photography Showreel That Showcases Your Work