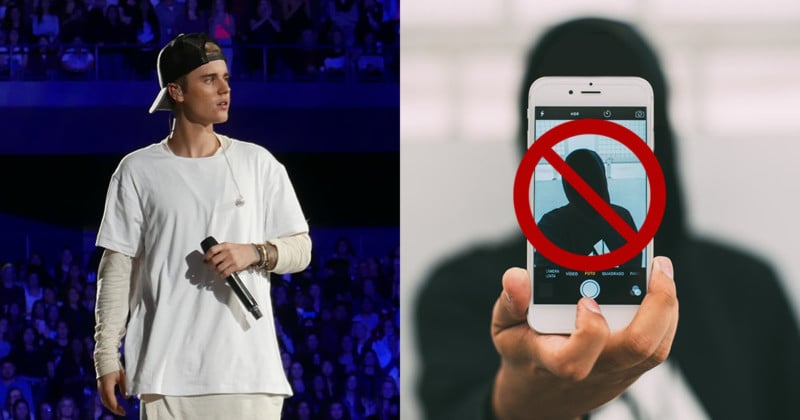 Justin Bieber announced this week that he will no longer stop to take photos with fans while out in public. He says things have gotten to the point in which he feels like “a zoo animal” due to the endless impersonal picture requests.

The simple message was published to Bieber’s Instagram account on Tuesday and has been “liked” ~1 million times:

“It has gotten to the point that people won’t even say hi to me or recognize me as a human,” Bieber writes. “[…] I wanna be able to keep my sanity. […] I don’t owe anybody a picture.”

Celebrities spotted in public these days are often swarmed by fans with photo requests, fueled in large part due to the rise of smartphone cameras and social media. In a social experiment and commercial that went viral back in March, soccer superstar Cristiano Ronaldo showed how he got more photo requests than sips of tea when he visited a local cafe.

It seems that many fans aren’t happy with Bieber’s new personal photo policy.

Justin Bieber posting that just shows how he is a selfish clown. #Embarrassing

Justin Bieber is now refusing to take pictures with fans. I understand he wants to set boundaries but this is just rude and ridiculous.

why does justin bieber act like posing for a selfie for 4 seconds is running a mile . people wanna make memories with u isnt that an honor ?

After a flood of angry comments were posted, Bieber followed up his post with another one to respond to his critics:

Braekess you are so right btw your Instagram name is fire. Years ago it was impossible to even take a picture at anytime not everyone was accessible to a camera now everyone has a camera phone and Now it's just a different thing.If you think setting boundaries is being a douche I'm the biggest douche around but I think it's smart and will be the only way I last. I wanna enjoy life and not be a slave to the world and their demands of what they think I need to do!! I love the fact that I am able to make people happy but cmon if you truly were in my position you would understand how tiring it is ( boo hoo Justin get over it) I'm going to keep making decisions I feel are fit for my growth and no human being will make me feel bad for it.

“Years ago it was impossible to even take a picture at anytime not everyone was accessible [sic] to a camera now everyone has a camera phone and now it’s just a different thing,” Bieber writes. “[…] I love the fact that I am able to make people happy but cmon if you truly were in my position you would understand how tiring it is.

Here are videos showing crowds of fans begging Bieber for photos — for the Instagram generation, it seems that selfies are the new autographs:

“I’d rather stand there and talk to you for five minutes and not take any photos, and us to be able to have that moment, rather than just chaos,” Bieber said in a video about this issue. “It’s like, why did you travel to see me in the first place? Was it to see me, or was it to get that moment of you seeing me so that you could tell people about it?”

Image credits: Header illustration based on photo by Lou Stejskal