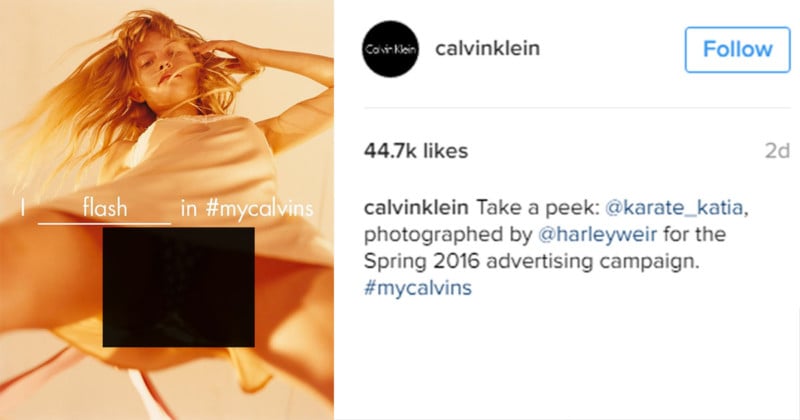 How far is too far when it comes to advertising photography? Calvin Klein has a risqué reputation of flirting with the border between acceptable and inappropriate, but one of their recent underwear ads may have crossed that line.

The uncensored photo (which we’ve chosen not to include in this article) appeared on the company’s Instagram, and in it 22-year-old Danish model Klara Kristin looks down at a camera that offers a clear view up her open dress at her CK underwear. On the picture, the ad copy reads, “I flash in #mycalvins.”

Adding to the controversy, the caption on the Instagram image begins with the phrase, “Take a peek.”

The ad has drawn the ire of the Internet, with responses ranging from some saying it’s just another day in the fashion world, to others who have dubbed the photo “disgusting,” “repulsive,” and are calling it “fodder for paedophiles.”

But not all the responses to the ad have been negative. Refinert29’s Fashion Features Director Connie Wang tells ABC News that photos like this are actually sending a positive message to women. Wang says the #myCalvins ads are “sexual but not exploitative, [they’re] sexual and empowering.”

Some are even calling the ad “progressive” because of the outrage it has sparked, claiming the ad is forcing people to engage in a conversation surrounding issues of consent and sexuality.

Despite the backlash, Clavin Klein seems to be sticking to their guns, much to the disappointment of the The National Center on Sexual Exploitation (NCOSE). The center has begun circulating a petition to that asks CK to “Stop Normalizing and Glamorizing Sexual Harassment.”

By normalizing and glamorizing this sexual harassment, Calvin Klein is sending a message that the experiences of real-life victims don’t matter, and that it is okay for men to treat the woman standing next to them on the metro as available pornography whenever they so choose.

The NCOSE is demanding that Calvin Klein remove the offensive photo, suspend the Erotica ad campaign it is a part of, and “issue an apology to victims of sexual harassment or assault everywhere.”