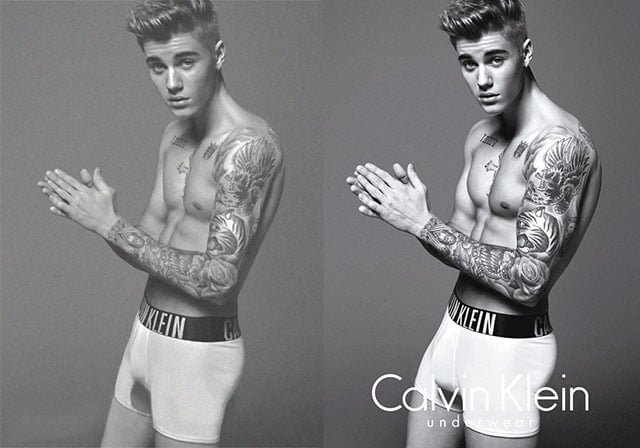 Singer Justin Bieber is the new face of Calvin Klein, and a number of new advertising photos and videos have been published in recent days as part of a new #mycalvins campaign. The black and white photos are causing a bit of controversy though: a leaked unretouched version of one photo suggests that quite a bit of Photoshop was used to alter Bieber’s appearance and… proportions.


The purported original photograph (above, on left) was emailed to the website BreatheHeavy by an anonymous source that was connected to the photo shoot. “Bieber specified he wanted to look ‘taller and buff.’ Bigger bulge implied,” the source said.

To see exactly what the differences in the images are, here’s a mirrored back-and-forth comparison (the original was taken down):

This allegation of misleading Photoshopping has since caused quite a furor in the media. After all, it’s not every day that we get to see a comparison of this type of ad photo before and after Photoshop.

Update: BreatheHeavy has issued a retraction of its post after receiving a cease and desist letter from Bieber:

Because BreatheHeavy is not about making anyone feel bad or intentionally stirring the pot (and are definitely not here for lawsuits), we shall retract the story per request. Bieber denies the photo is real, and I respect that and will believe him.

The GIF comparison has since been taken down. Calvin Klein is also defending Bieber’s character, saying they were “proud” of how Bieber conducted himself on set. If Bieber is telling the truth, then the photo that has been spread across the Web is indeed a hoax image designed to fool the world.