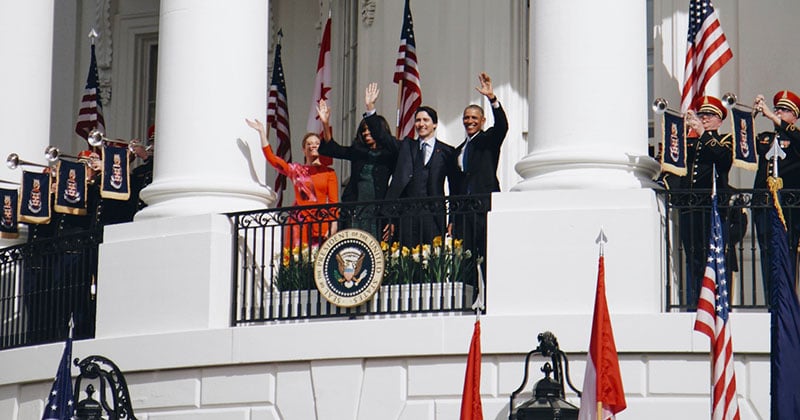 On March 10th, 2016, I woke up with great expectations: I was heading to the White House to photograph Canadian Prime Minister Justin Trudeau and American President Barack Obama.

This wasn’t just any other day for me. It was a day that was going to change the way I think, see the world and take photographs.

At 6:44am I hopped into an Uber where I made my way to 1600 Pennsylvania Avenue, Washington, D.C.

Arriving at around 6:45 I met up with the 19 other people who were selected by the White House to do the exact same thing I was about to do – share my experience online with the world. 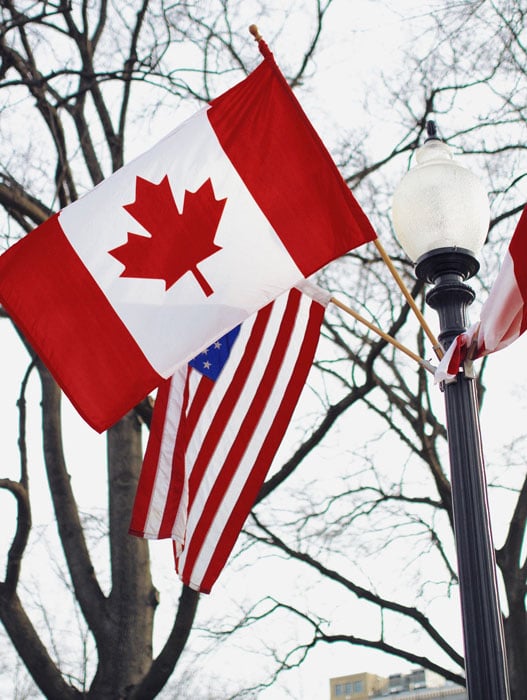 Once everyone was accounted for, we lined up along the Canadian/American flag covered entrance way to check-in with the Secret Service. The 1st checkpoint was to cross our name off the guest list. Once they found my name, they crossed it off and I headed for the next screening process. I handed my Canadian Passport to a Secret Service Agent that took 2 minutes to look at something on his laptop he had sitting in front of him.

After a few moments he handed me my passport and told me to proceed through to the next security checkpoint. I then was patted-down by a Secret Service Agent while my camera and camera bag went through an x-ray machine. I was free to head down the driveway where I first laid eyes on The White House from a close vantage point.

The group I was with was in front of me walking down the driveway – but I got lost in the beauty of the South Lawn and lost them moments later. 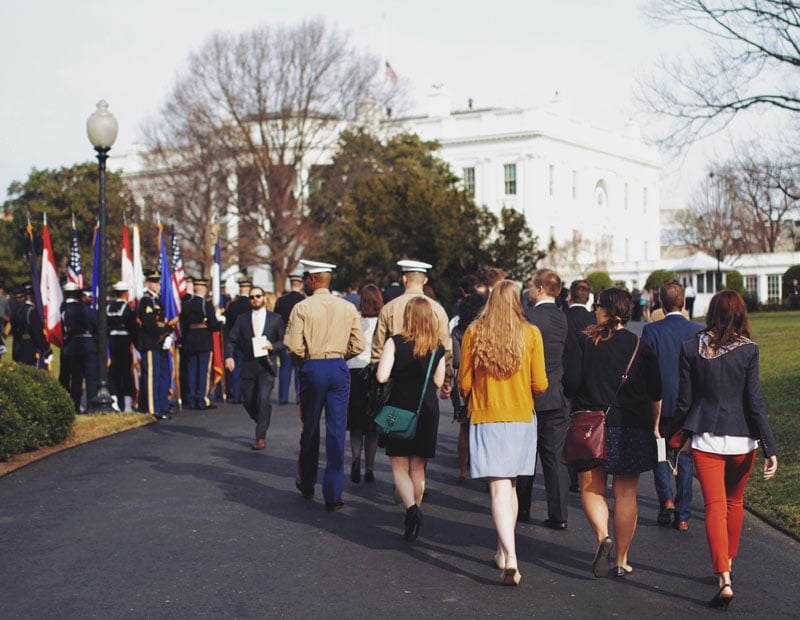 I proceeded to follow the driveway up to the very front of the White House where I found an open area 1st row about 30 feet right of the podium where Trudeau and Obama would speak.

I finally realized where I was, took a deep breath in, got myself situated and all my cameras organized. The next few minutes were important. As a photographer, you need to become well aware of your surroundings. I took this time before the ceremony started to see the little things that other people photographing may not see… 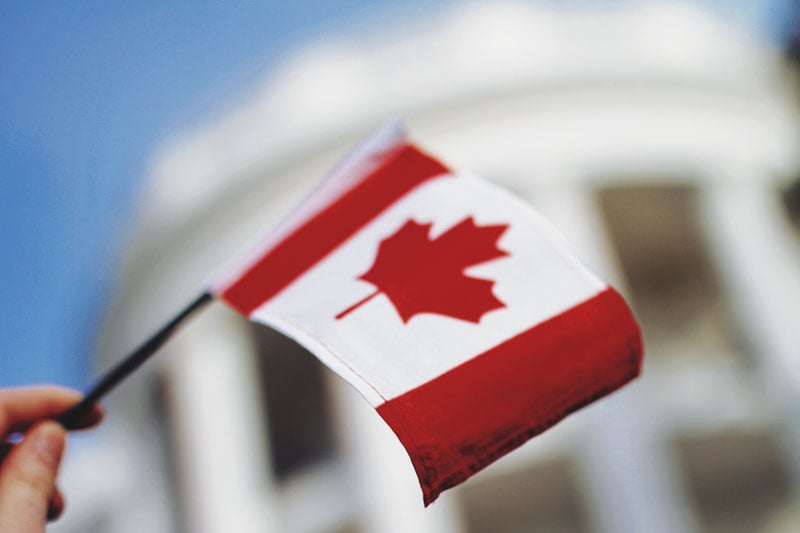 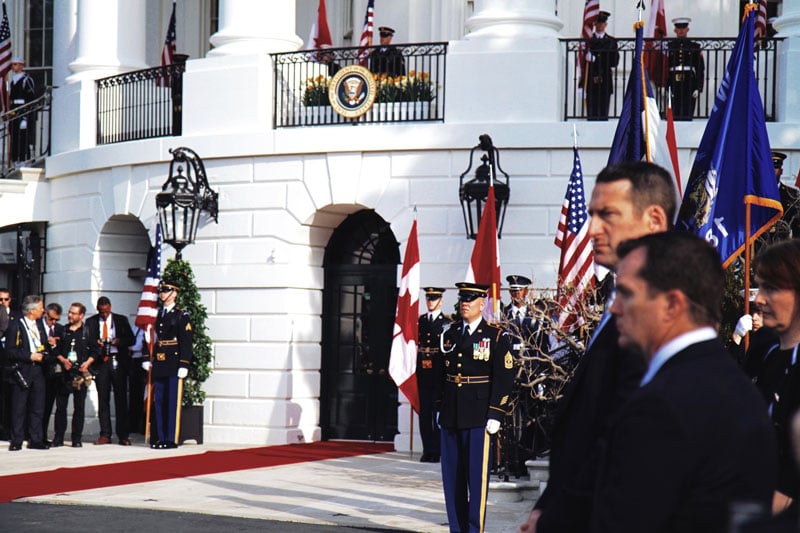 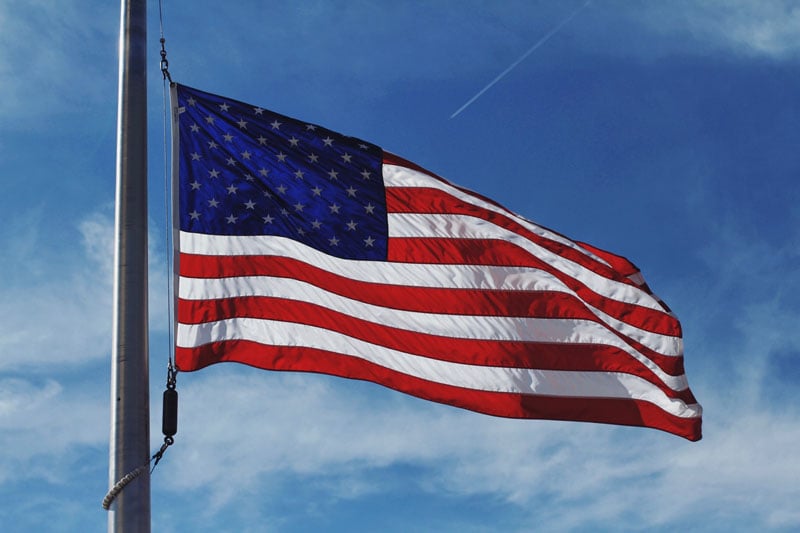 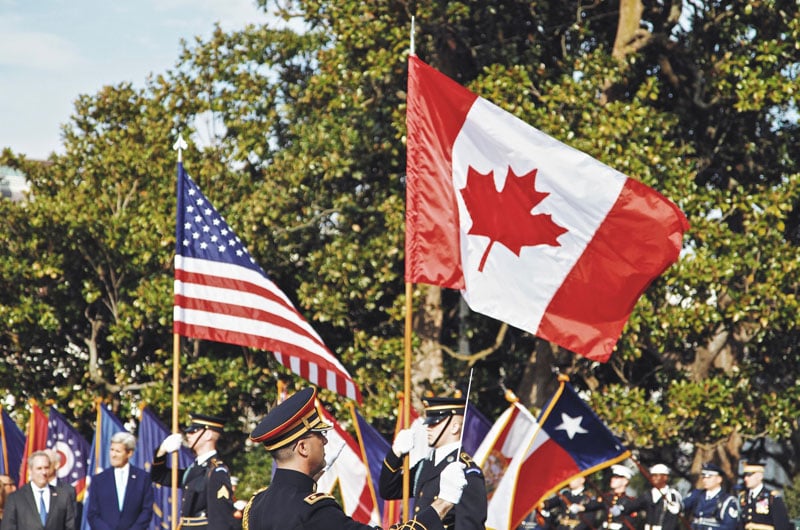 After capturing some special moments trumpets started sounding and what sounded like a voice from the heavens came on the P.A. system and said…

“LADIES AND GENTLEMEN, THE PRESIDENT OF THE UNITED STATES.”

A euphoric feeling was then felt down my entire body. In the flesh, there was President Barack Obama – the guy you see on TV doing his job as the leader of the free world. Standing proudly by his side stood the ever so beautiful First Lady, Michelle Obama. They both waved to the crowd and waited for the Prime Minister to arrive.

Moments later Prime Minister Trudeau and Sophie Grégoire-Trudeau drove up the driveway and got out of a black SUV. President Obama and First Lady Michelle Obama welcomed them with hugs, handshakes, smiles and a quick conversation before heading up the stage to deliver the ceremonial speeches. 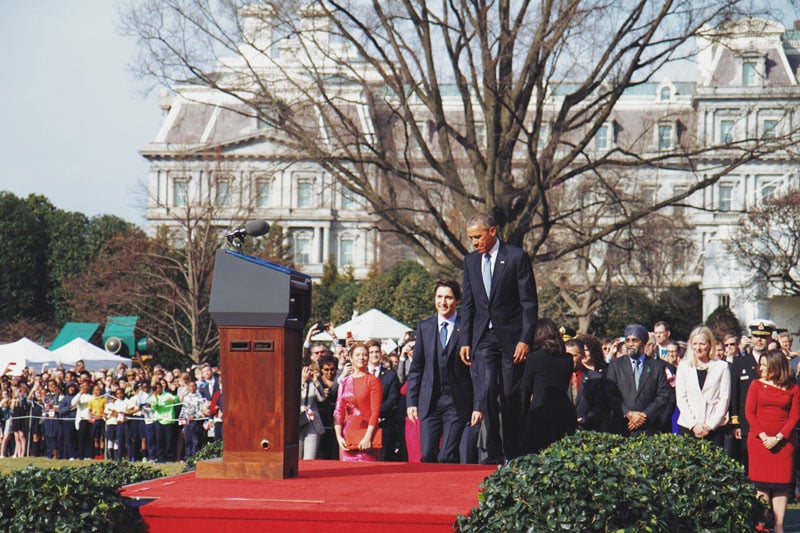 Once settled on stage, President Obama and Prime Minister Trudeau stood with their hands on their hearts during both the Canadian and American National Anthems. 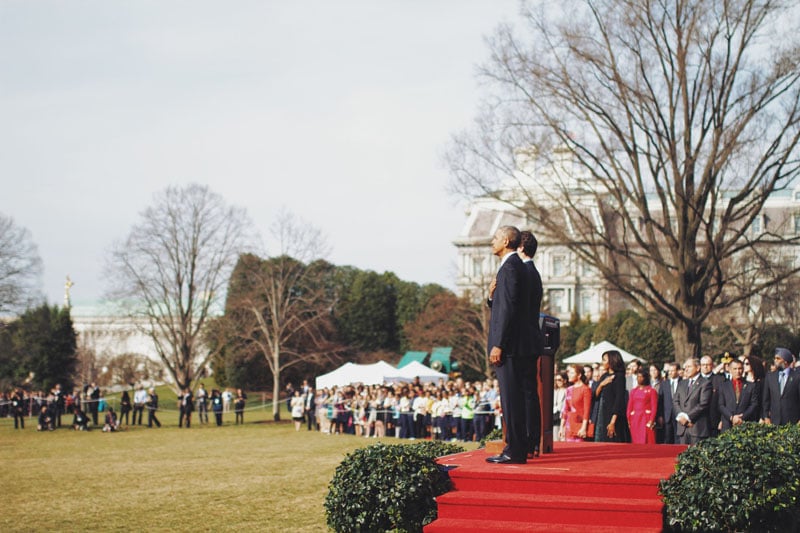 After the anthems finished, it was finally time to hear them speak. The atmosphere was electric. Both Canadians and Americans that were present were anxiously awaiting what President Barack Obama would say when the mic was turned on.

President Obama kicked off the ceremony and paid homage to our Canadian slang. Then proceeding to talk about our strong ties, trading agreements, and imports and exports. President Obama took a jab reminding Prime Minister Trudeau where the Stanley Cup is (Obama’s hometown of Chicago). At that moment in time, I caught this well framed moment of Prime Minister Trudeau laughing alongside Canadian dignitaries, who were hysterical in the background. 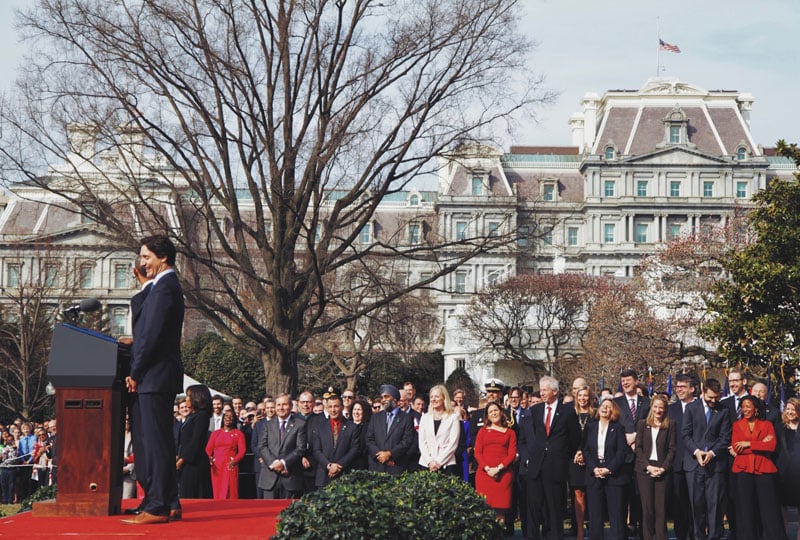 It was then Prime Minister Trudeau’s turn to take the podium. 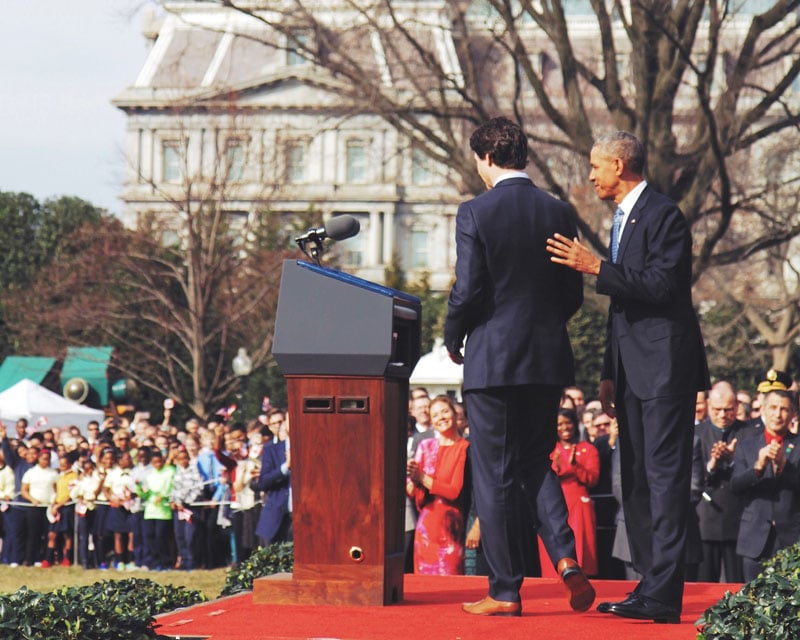 Prime Minister Trudeau now had his stage to tell Americans and people listening around the world, how great Canada really is. He mentioned things like exports to America which included oil and 3 Canadian members of the Stanley Cup champions, the Chicago Blackhawks.

At that moment in time I didn’t have any cameras on me – I was simply taking in the moment. And being a Canadian hockey fan, I let out a loud cheer and clapped instantly. Which resulted in a smile and eye contact from the President due to the proud Canadian exuding from me.

Trudeau wrapped up with a very insightful quote…

“The history may be complex, but the bottom line is clear. There is no relationship in the entire world like the Canada-U.S. relationship.” 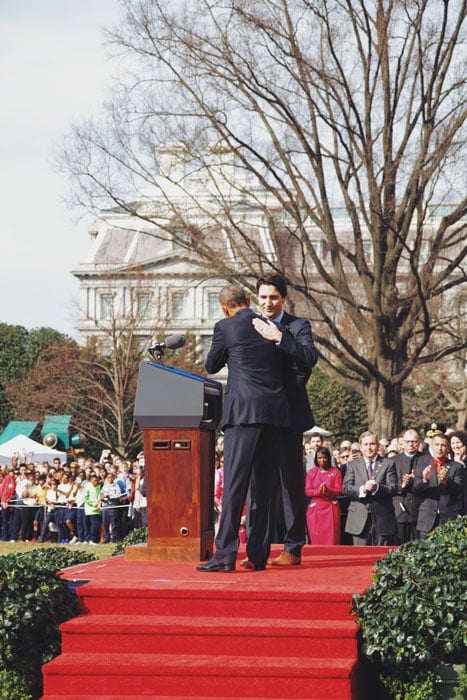 Exchanges were made once applauses were heard from the crowd and the two made their way towards the White House balcony for a photo opportunity. 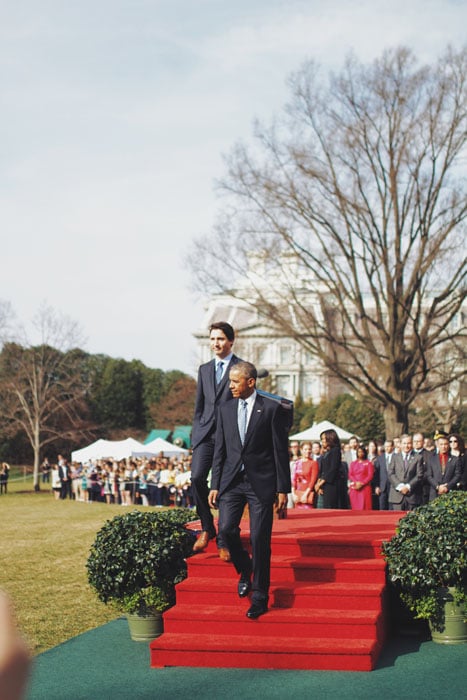 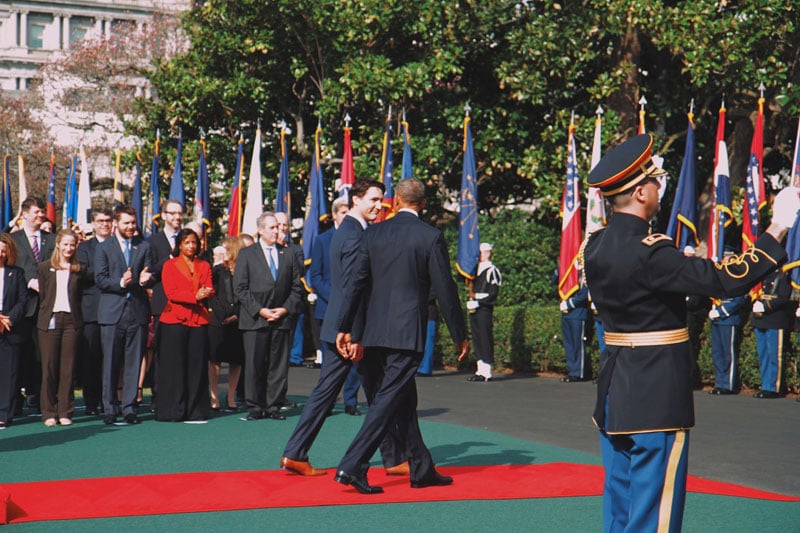 As I knew things were now wrapping up, I made sure I was set to get the shot I came here for. Canada flags, American flags, the White House, The President, The Prime Minister, The First Lady and Sophie Grégoire-Trudeau. This was it. The four then proceed up the stairs to the balcony of the White House. 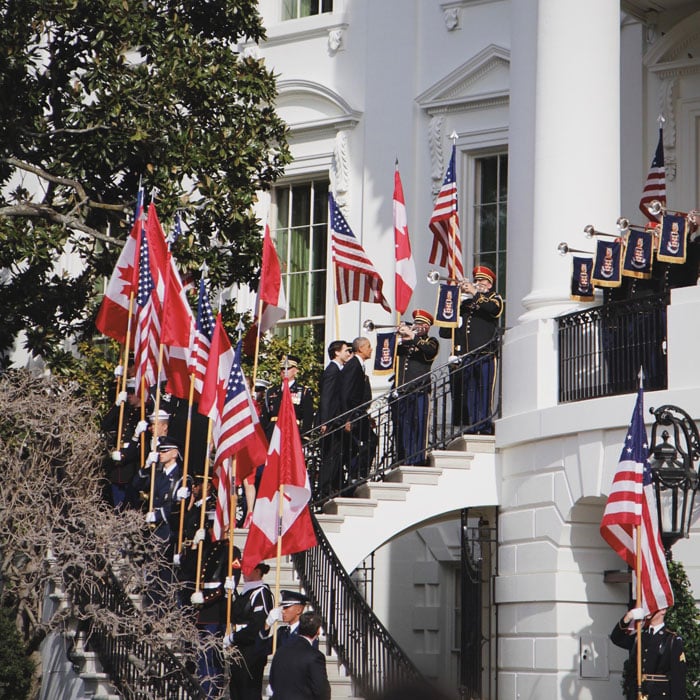 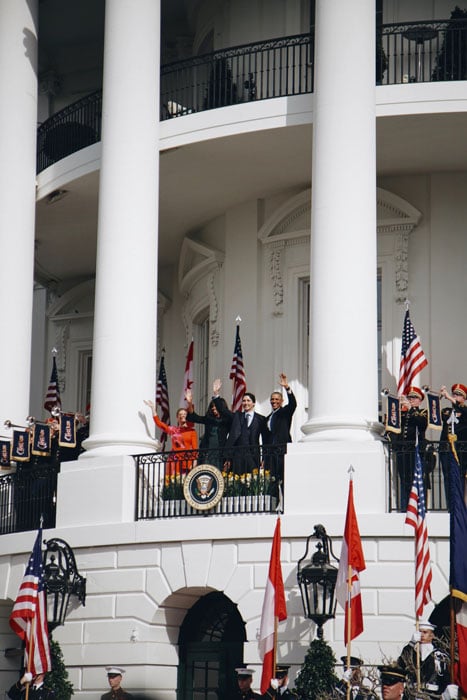 I got the shot.

It then took me some time to digest it all and fully comprehend the last half hour of my life: I just photographed history at the White House.

This was one of the most incredible moments I have ever seen with my own eyes. And the only way I can explain how I feel about it can be described in three words…

I hope these three words came out in my photography of this ever so special event. It’s moments like these that you truly appreciate in life and that inspire you to share these visuals with the world. I am so humbled and honoured to have been able to photograph this historic moment.

I honestly never thought my photography would take me here. I’d like to take this time to thank everyone for believing in me and inspiring me to become a Storytelling Photographer.

Last but not least, I’d like to share with you the incredible docu-style film compiling all the experiences and visuals that Director Alexander Marshall from George Briggs put together.

About the author: Taylor Jones is a photographer and Internet artist living in Kitchener, Ontario. He’s the founder of the world’s most popular nostalgia blog, DearPhotograph. You can find more of his work and connect with him through his website, Facebook, Twitter, and Instagram. This article was also published here.

A Guide to Mastering Manual Focus

The Horror of Having a Powerful Photo Go Viral Online