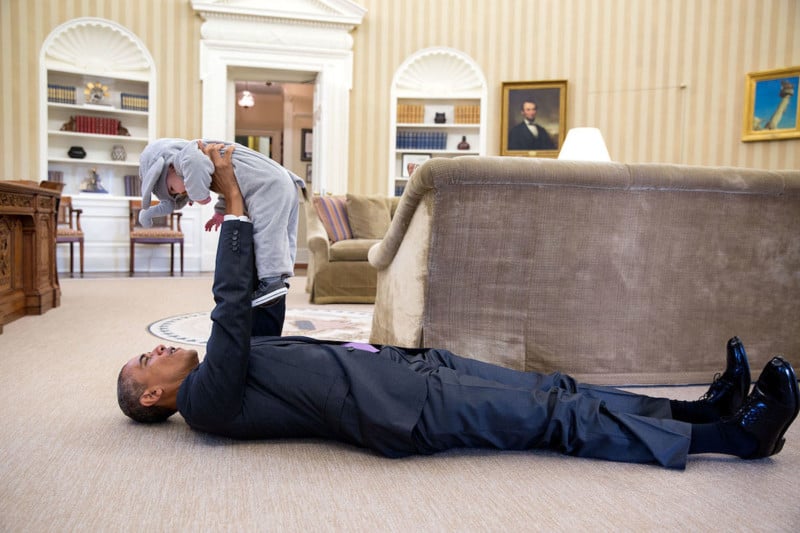 Official White House Photographer Pete Souza recently sat down with BBC Newsnight to reflect on his experience photographing President Obama. By the time Barack Obama finishes his eight years in office, Souza estimates he will have taken nearly 2 million photographs of the President.

Souza actually took his first photos of the president way back in 2005, long before he sat down in the Oval Office, but even then Souza says he was thinking ahead to Obama’s potential presidency. “There’s a picture of him where I was consciously thinking about this,” says Souza. “He’s walking around Red Square, he’s on a sidewalk, and nobody knows who he is. And so I was trying to show that […] I said to myself, ‘If he ever became president, this is a picture you’ll never see again.'”

Throughout the short interview, Souza offers a glimpse into what it’s like to photograph one of the most powerful people on Earth day-in and day-out—to capture the playful moments, the serious moments, and the tragic moments, too. It’s an interview packed full of insights into both Souza’s job, and the unguarded moments of President Obama’s life in the White House.

In one of the most poignant sections of the interview, Souza recalls photographing the President consoling families of mass shooting victims. “That’s hard on me,” he recalls. “Especially after the Newtown shootings where the emotions of the families were so RAW… I mean they had just lost a child. I don’t regret taking those photographs, but they were very hard to do. I’m sure I probably had some tears flowing down my cheek.”

Watch the full interview above to hear more, and then head over to the official White House Flickr account to scroll through some of the most popular images Souza has captured during his time as the Official White House Photographer.

Supermodel Captures Her Intense Wingsuit Flight Over an Active Volcano