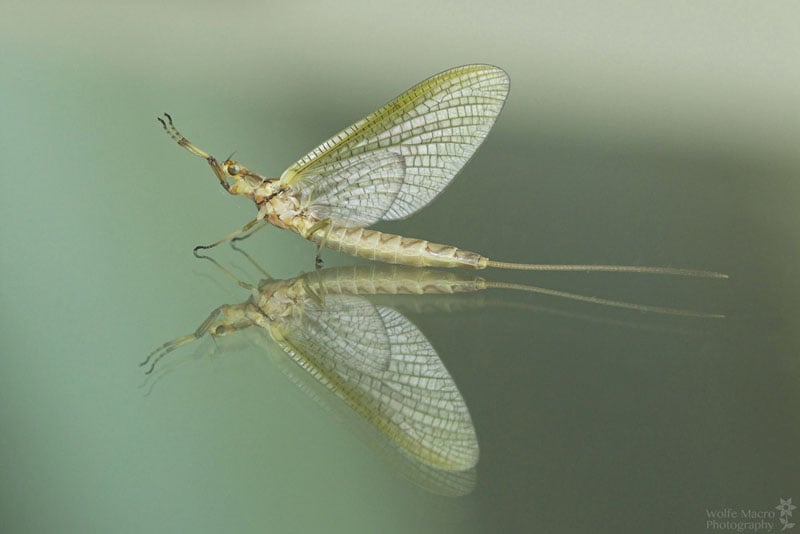 Meanwhile, the photographer claims the scene was not manipulated in any way. No ethical nature photographer would attempt to convince viewers this photograph was legitimate and no wildlife enthusiast would ever hesitate to call a photographer out on such an attempt if it did happen.

Why, then, is the photography community willing to allow these atrocities to slide when it comes to insect and spider photography? 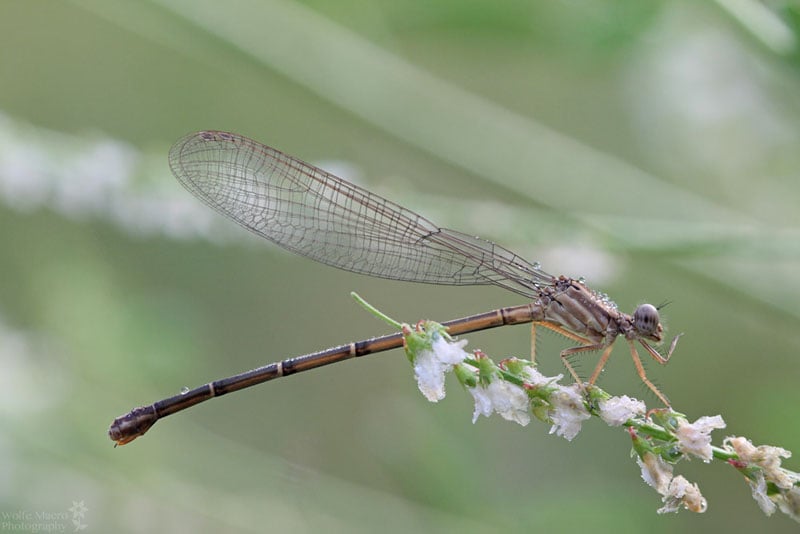 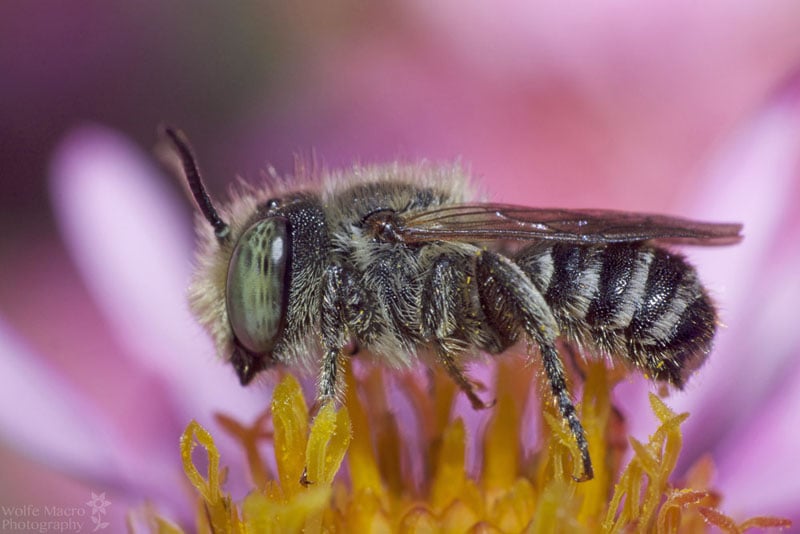 The absence of ethics in macro photography is my single biggest frustration in photography. Some photographers are receiving great accolades for “nature” images that are nothing more than artistic composites or manipulated natural scenes.

Take, for example, the 2011 National Geographic contest winner, Shikhei Goh, whose image of a dragonfly in a supposed rainstorm won him the grand prize in the nature category.

In his original photo submission, he claimed he was caught in a sudden downpour when he happened upon the dragonfly. Only after winning the grand prize did the “truth” shift. Careful analysis of several other similar photographs from Goh revealed something fishy about the way the “rain” was hitting the insect.

Goh later admitted that his friend sprayed water on the dragonfly to get the shot. He claimed that the original caption he submitted alongside the photograph had been manipulated for added effect. Regardless of the truth, National Geographic angered nature photographers across the globe when it stood by its decision to award Goh the grand prize that year. What’s even more embarrassing is that Nat Geo would later publish an article on their website about the importance of ethics in wildlife and nature photography.

I have to imagine that a similarly manipulated photo of a human subject would not have been taken so lightly. After all, it’s just a bug.

You can find more of Goh’s work (and others like him) all over the internet. Photographs of manipulated subjects have been liked, shared, and commented on thousands of times by ignorant people who know very little of natural animal behavior. Other unethical masterpieces include “dancing frogs” (which are believed to have been reaching for wires that were digitally removed from images) and puddle-crossing snails.

People who know a bit about a species and its natural range are quick to point out flaws in these types of images. Many of these cute and striking images have been proven to be of subjects purchased at pet stores and manipulated for the sake of a shareable photograph.

Where Should We Draw the Line?

When done properly, composite images can be beautiful and artistic. When displayed as true nature photography, however, these images perpetuate the public’s misunderstanding of the natural world of insects and spiders (and other creatures). While I don’t feel all photographers should be obligated to caption their composites as such, captioning composite images with text that leads viewers to believe the scene was real is unethical. You would never produce a composite image of a giant panda sitting on a humpback whale and pass it off as truthful, so why do it with insects and spiders?

Images That Cause Harm

A wildlife photographer is not likely to kill a deer for a photograph, but killing an insect (either intentionally or through manipulation) for a great shot seems okay. Trampling through insect habitats and ripping flora from the soil (especially in public spaces like National Parks — and yes, I’ve seen this happen) in the name of photography is often unethical, yet often done.

I should note that many insect and spider photographers become interested in the art through the study of entomology. These researchers turned photographers often have a different outlook on insect manipulation than someone who may be interested in sustainability or environmental appreciation. I strongly feel that photographs taken in the name of true scientific research are important. As such, manipulation is sometimes required. However, to the extent possible, wildlife and nature photography ethics guidelines should always be followed.

The North American Nature Photography Association has a great code of ethics that includes guidelines like: “learn patterns of animal behavior so as not to interfere with animal life cycles” and “do not distress wildlife or their habitat.” The organization also offers a set of guidelines about ethics in captioning photographs. I encourage photographers interested in macro photography to follow the same guidelines that would apply to other types of nature photography. Ignorance is Not Bliss

Nature enthusiasts would likely be horrified to learn that the animals in their favorite nature photos were baited, trapped, or removed from their natural habitat (or worse, killed). I’d like to believe that if people knew what really goes on behind the scenes of the fairytale-like macro images we see on social media, they would be equally horrified. Yet with insect and spider photography, this kind of manipulation often goes unnoticed.

The sad reality is, most people know very little about insect and spider behavior. A composite image of a jumping spider sitting gracefully atop the head of praying mantis doesn’t raise eyebrows of those unfamiliar with the world of arthropods. People need to learn more about these amazing and crazy cool creatures.

Insects and spiders make up a large part of nearly every ecosystem and many food chains. Without insects and spiders, we wouldn’t have much diversity in fish or bird or even small mammal populations that rely on these small creatures as a vital food source. 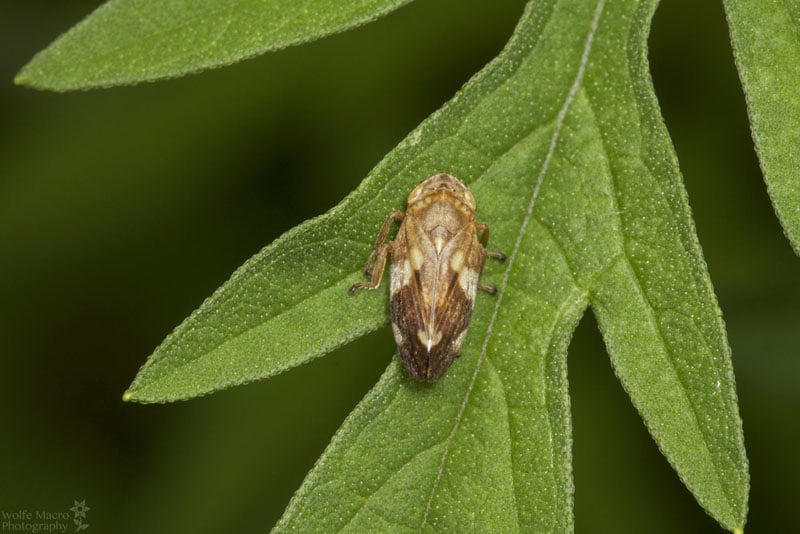 I am a strong believer that great macro photography should inspire and teach. Macro nature photographers should use their work as a means of sparking interest in nature and encouraging sustainable behavior. Rather than focusing on how many “likes” you can get for a close-up shot of a dead spider, let’s use photography to show children that bees and wasps are an amazing and necessary part of our human world.

Photography is a powerful tool. Let’s use it wisely and ethically.

About the author: Danae Wolfe is a macro nature photographer residing in Northeast Ohio. Her primary artistic interests include shooting candid insect and botanical portraits. She recently launched Chasing Bugs, a new blog for photographers interested in shooting macro photos of insects in their natural habitats. This article was also published here.