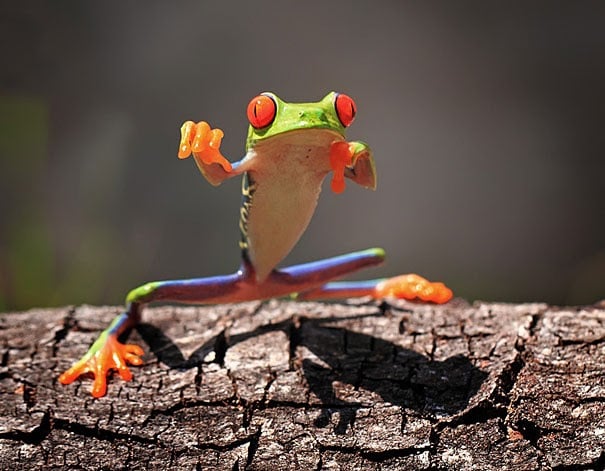 Photographs like the one above by photographer Shikhei Goh go viral on a fairly regular basis. If the stories are to be believed, given enough patience and a little (or a lot) bit of luck, animals can be captured doing all sorts of amazing things.

According to an analysis published on Weibo, however, the stories can’t (or rather shouldn’t) be believed. Photos like these, the article claims, are staged by photographers who force pet store animals into awkward and unnatural poses.

Some of the photos pointed out as potential fakes in the original post — which has been translated into English by photographer Jenn Wei — are well-known and have won their photographers many an award in addition to press attention. But even so, the original analysis claims that many of them are “obvious” fakes.

Take the photo above for example. Shot by the aforementioned Goh, it’s part of a series of “amazing dancing geckos” that was featured in The Telegraph. Apparently, when placed on the reflective black surface, the geckos enter a “trance-like state” and start to boogie. But the analyst isn’t buying it.

“These are leopard gecko, naturally found in Central Asia and common pet. Anyone who’s had them as pets know they won’t be able to pose like this even if they took ecstasy,” claims the analysis. “All these are with the help of a simple thread.”

And that’s how the author believes most of these shots are faked: string. Because the upright animals always seem to have their limbs arranged in a straight line, he says the animals are forced into these positions using string which is then removed in post.

Most of these fakes, according to the original article, come out of Indonesia. And beyond the animals getting into positions that would be otherwise impossible to reach, or acting in unnatural ways, many of them are apparently in the wrong country.

The stories, which often include a walk in the rainforest or a friend’s backyard, couldn’t have happened naturally since many of the animals in the outdoor photos (although found in pet stores) aren’t actually native to Indonesia at all.

There are many more accusations and examples given in the original article, so head over to Wei’s translation if you’d like to read the whole thing. As we said before, some of the accusations (for example, against a National Geographic award-winning photo) are fairly serious, so a grain of salt is suggested when reading.

However, the message is there for anyone who hasn’t already heard it enough times: don’t always believe what you see. Until automatic fake photo detection systems like this one become a reality, the days of Photoshop have made “believing your eyes” a bit less straightforward.

Review: Olympus E-P5 Can Do Tons But Weighs Just Ounces