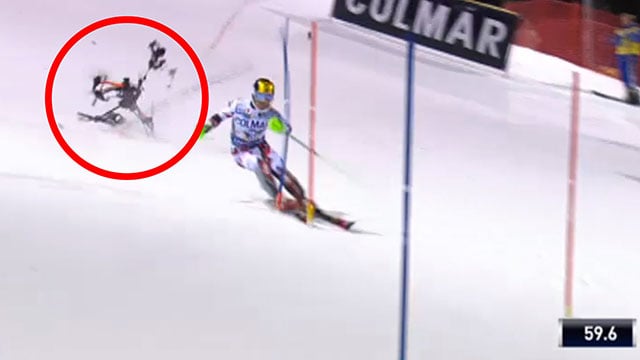 Camera drones got some bad press yesterday after one fell out of the sky and nearly smashed Marcel Hirscher, one of the top skiers in the world.

The Associated Press reports that four-time World Cup champion Marcel Hirscher was doing his second slalom run at the race in Madonna di Campiglio, Italy, when a large camera drone carrying a heavy broadcast TV camera plummeted to the ground and smashed into pieces just behind the skier.

Here are a few different views at different playback speeds:

Hirscher may have been hit by some of the exploding pieces of the drone, but he didn’t appear to notice that anything had happened as he continued his run. He shared a still frame of the crashing drone on Instagram afterward, saying: “Heavy air traffic in Italy”:

This accident likely marks the last time that camera drones hover over athletes at this type of race. “This is horrible,” Hirscher tells the AP. “This can never happen again. This can be a serious injury.”