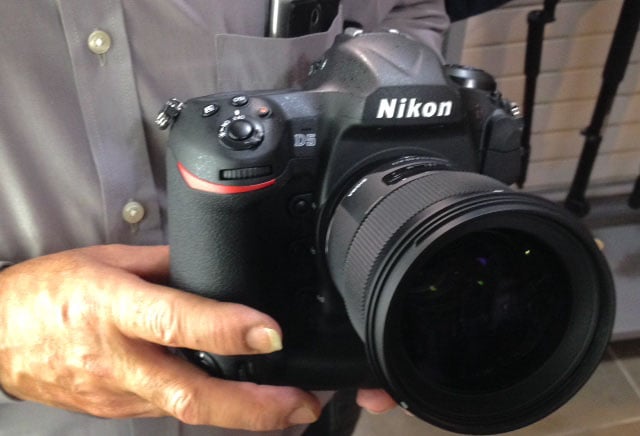 When the first Nikon D5 photos leaked out earlier this week, sharp-eyed commenters noticed that the viewfinder appears to have little release buttons on the side, suggesting that the camera will have a larger interchangeable viewfinder piece.

Those observations were spot on: newly leaked photos show that the upcoming Nikon D5 does have a large eyepiece that can be easily removed by pushing the buttons in and sliding the piece off.

A user named “jml2” in the French photography forum Chasseur d’Images has posted a set of new photos that show a Nikon D5 sample unit. The person writes that they stumbled upon the D5 on the bottom shelf of a little camera shop, and that it had a Sigma 50mm Art lens mounted to it. Here’s what the optical viewfinder area looks like when the eyepiece is popped off: As you can see from the above photo, there’s also a new integrated shutter in the viewfinder prism for photographers to seal off the camera from light when shooting long exposure photos.

Here’s a photo of the detached eyepiece: jml2 also writes that the camera has a rectangular AF area that’s about the size of an APS-C, so there’s no full frame coverage.

You can find previously leaked photos of the D5 here and here.

(via Chasseur d’Images via Nikon Rumors)

Image credits: Photographs by jml2/Chasseur d’Images and used with permission