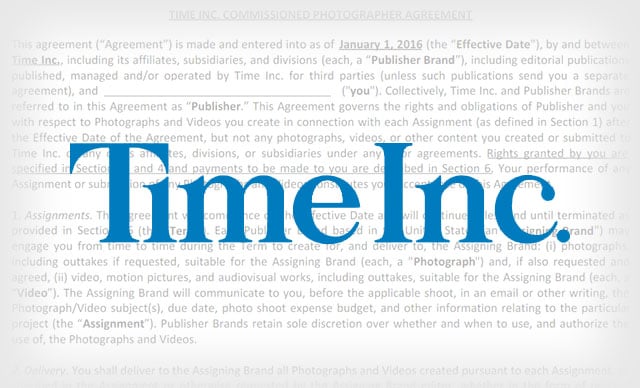 TIME’s latest contract for photographers has been at the center of controversy for about a month now, and many photographers are still refusing to sign it as they campaign for more favorable terms.

Photo District News reports that a number of organizations representing large numbers of photographers are advising their members to not sign the contract.

Mickey Osterreicher of the NPPA and Thomas Kennedy of the ASMP sent this letter to Time Inc. in late November on behalf of a few major photography groups (the APA, DMLA, and PPA):

“While we understand your desire ‘to create a new management system that will allow [you] to track the use of commissioned editorial photography and to foster a consistent approach across Time Inc.,’ we strongly object to the draconian terms and conditions you impose on those contractors in order to increase your profitability,” the letter reads. “Indeed, we believe the agreement as written will have the opposite effect by undermining your longstanding commitment to those who have produced those iconic images for almost 100 years.”

The contract applies to 90 of Time Inc.’s publications and brands, including TIME, Sports Illustrated, People, and Fortune. The terms will start taking effect on January 1st, 2016, so the window for any change is dwindling.

Although aware of the outcry, Time Inc. doesn’t seem to be budging on its stance. “We have standardized our photography rights and rates across our brands,” the company said in a response statement issued to PDN. “Our new contract is fair and equitable. Many photographers have already signed the new agreement.”

Traveling to Cuba as an American Photographer