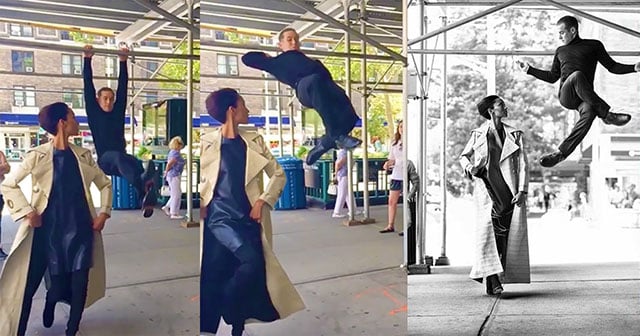 New York-based photographer Alexi Lubomirski was recently commissioned by Allure Magazine to shoot a series of fashion photos titled “Mood Elevators.” The images show a man floating around as he walks next to a woman.

Lubomirski chose to use acrobat Richie Maguire instead of Photoshop to create the surreal images. Allure posted this short video showing how one of the shots in the series was made by having the man swing off a bar and pose at the peak of the launch:

A photo posted by Alexi Lubomirski photo (@alexilubomirskiphoto) on Oct 21, 2015 at 7:57pm PDT

A photo posted by Alexi Lubomirski photo (@alexilubomirskiphoto) on Oct 21, 2015 at 7:59pm PDT

You can find the full set of photos over on Lubomirski’s website or in this month’s copy of Allure.