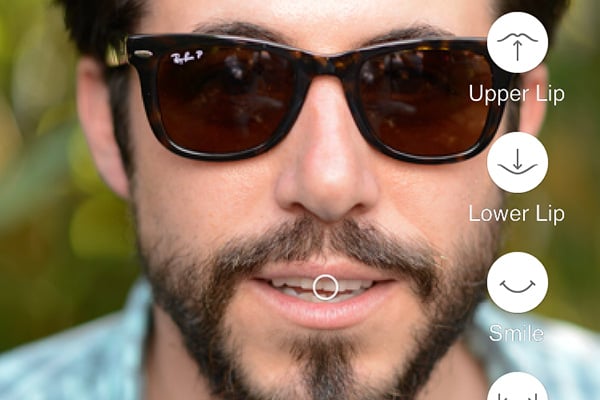 Back in September, Adobe ate some crow after showing off the new Photoshop Fix, a mobile app that has many of the powerful retouching features of Photoshop. In the demo, an image of a model was used to demonstrate the new “Smile” feature, whereby the user can manipulate the strength of a smile by simply dragging a finger.


Given heightened awareness of everyday sexism and misogyny, the demo didn’t go over well, and some speculated the feature would be removed from the final candidate.

In October, Photoshop Fix made its way into the App Store for iOS (Android to come later), and I can assure the feature is there, and it’s a tool that makes you wish the rest of the features were as easy. Let me explain. 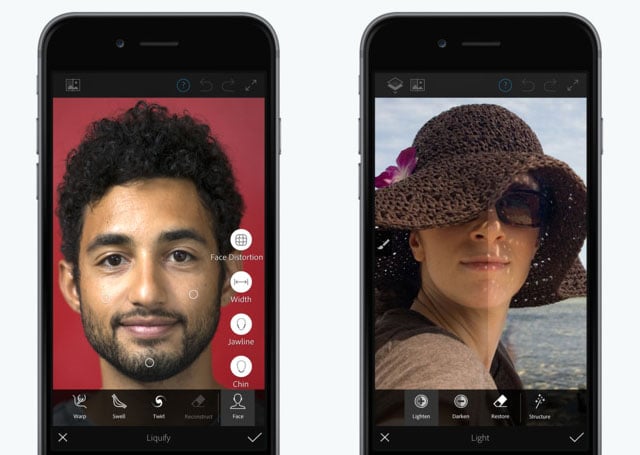 As the newly released iPad Pro has shown, the tremendous processing power of tablets (coupled with a good stylus) means tablets (and to a certain extent, phones) are more than viable alternatives to the desktop computers we’ve historically needed to do heavy graphics operations. Photoshop Fix brings many of the familiar retouching tools (e.g. healing brush, clone stamp, patch tool) to your fingertips, but they basically behave the same as their desktop counterparts.

If you’ve ever had trouble realistically retouching skin, Photoshop Fix isn’t any easier. Here’s a studio lit portrait with a model who has typical skin blemishes. 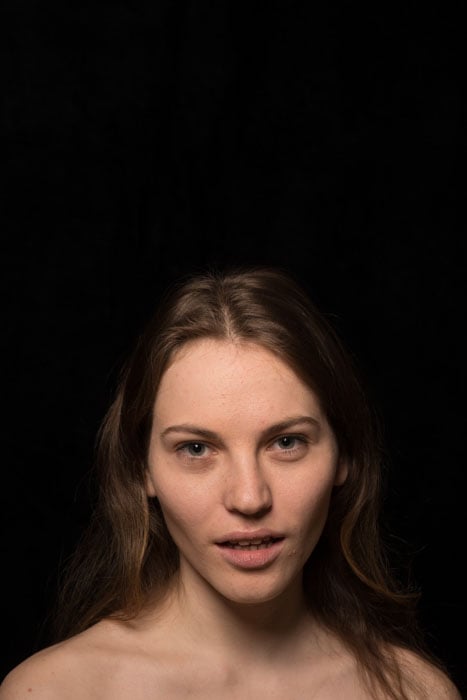 I zoomed into the mouth area hoping to fix a pimple above the upper lip, and smooth out some of the roughness of the lower lip. So I selected the Spot Heal tool, and swiped my finger across the affected areas hoping for the best. 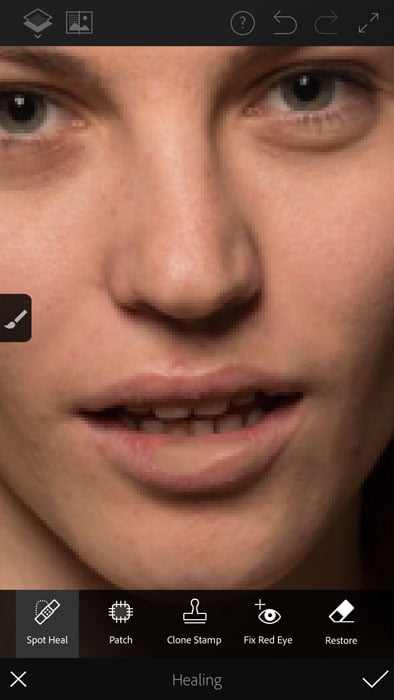 If you have familiarity with Photoshop, the interface will be fairly intuitive, and in many ways using your finger is easier than using a mouse. But even though I zoomed in and used a small radius, the spot heal wasn’t smart enough to only sample the color of the lips – instead grabbing a sample from the flesh. 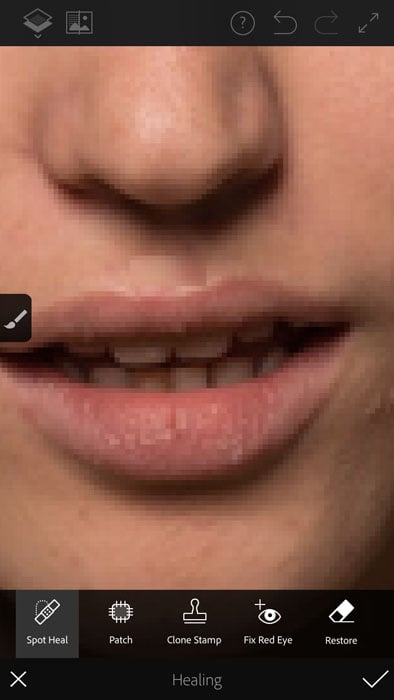 And despite trying multiple times, I was not able to use the spot heal tool to fix the blemish. So I switched to the clone stamp and altered the opacity, which yielded a more natural looking result. 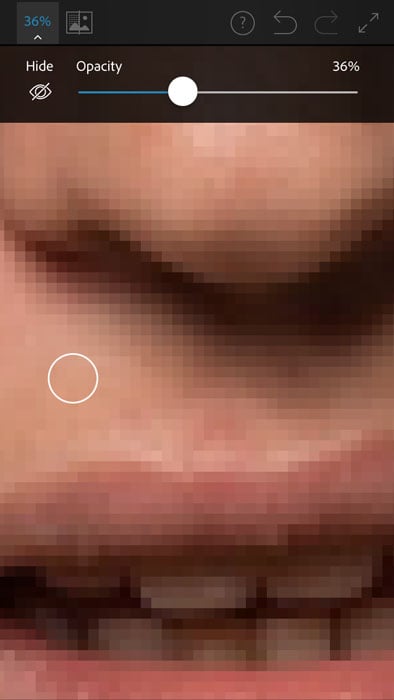 If you’re a fluid retoucher in Photoshop, you’ll probably do decently with Fix (although iOS has the annoying “spring” when you reach the limit of zoom gesture). This makes precise control difficult; perhaps something more suited for the Apple Pencil. But if you were hoping for more of a one touch experience akin to picking an Instagram filter, you’re out of luck for this type of work.

Which brings me back to something that made me smile. I took a selfie with the front-facing camera on my phone, and pulled it into Fix. Choosing the Liquify tool pulls up a sub-menu with a “Face” option, and selecting the “Smile” tool displays an arc interface to the right of the image. Swiping up or down changes the direction of the smile. Smile, Allen. 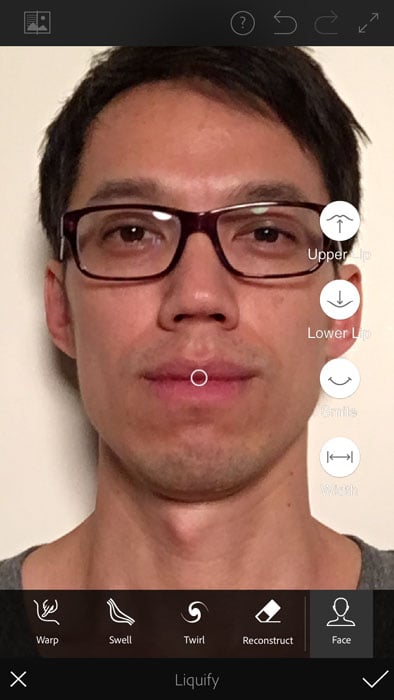 Maybe not the most natural of smiles, but impressive nevertheless. The Smile feature, like the other facial liquifying tools doesn’t require you to outline the face, or pick any landmarks. The software is smart enough to map facial features, which makes life much easier. Want a beefier jaw? Look ma! I got my wisdom teeth pulled. 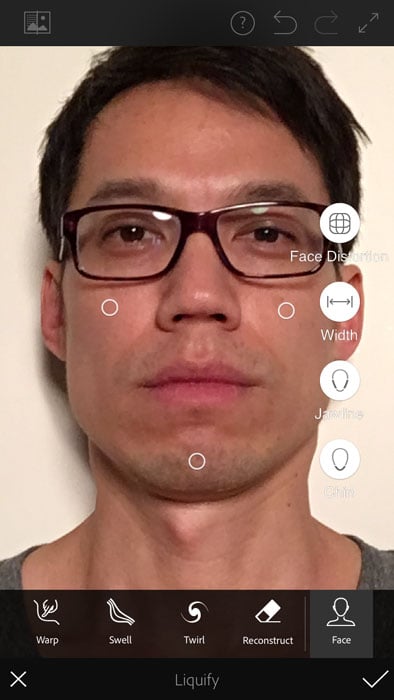 Or maybe you’re going for that Jay Leno look. Fix parameterizes some of the silly effects you might find in Photo Booth or Snapchat filters, and makes them useful when used more subtly. The simplicity of these tools really makes you wish there was a generic skin softening or blemish removal tool that could use the same facial detection to auto-identify areas of the face. Perhaps in a future version.

Well-integrated into the Adobe ecosystem, images can be saved into the Cloud and accessed by other programs and devices. Images are scaled down to 2048×2048, so it’s still a tool designed for use with and display on mobile devices. Despite my initial skepticism, I have no doubt that Adobe will have good adoption with this app — particularly if they continue to build upon the simplicity of the facial tools.

So if you’re not smiling now, there’s a Fix for that.

The Different Types of Fashion Photographers