Apple and Adobe sparked some unintended controversy yesterday after unveiling and demonstrating the new iPad Pro. Adobe mobile design director, Eric Snowden, took to the stage and showed off a new app called Adobe Fix, which offers powerful face detection features for mobile photo retouching. This is the mobile Photoshop app that was previously referred to as Project Rigel.

As an example of the app’s powers, Snowden showed how the app can easily turn a woman’s neutral expression into a smile. The demo drew some chuckles from the audience, but journalists and commentators immediately turned to social media to condemn the demo as sexist. 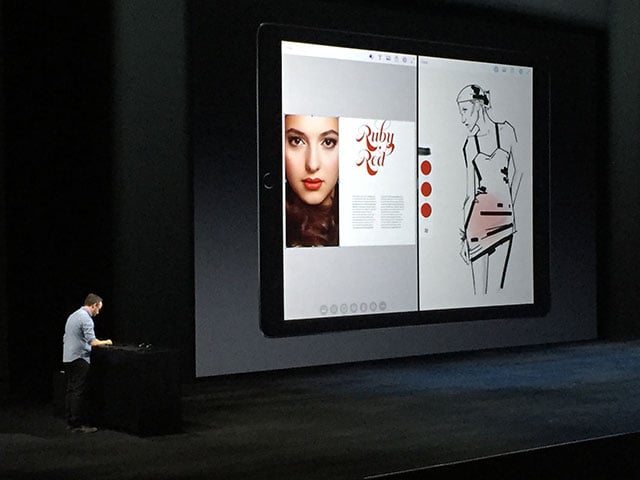 “I’m not quite happy with the model’s smile,” Snowden said, after opening up the portrait in a page mockup. “I wish she had just a little bit more of a smile. I think it’d warm up the design quite a bit.”

Snowden then loads the photo into Photoshop Fix, selects the lips, and drags a slider to instantly give the woman a smile. You can see the demo at about 38.5 minutes in the Apple event replay. Here’s a short clip of the exact moment:

“The move is being called ‘tone-deaf’ and unfortunate, given the tech industry has been in the firing line lately for its lack of diversity,” writes the New York Times. Mashable adds: “Apple, let’s not force women to smile at your Keynote event.”

Here’s a sampling of reactions on Twitter from journalists and others:

After all the stick Apple get about women & they choose to PHOTOSHOP A WOMAN'S FACE. I cannot. #AppleEvent

1 woman on Apple stage so far is model they're photoshopping. "I don't really like the model's smile, but at least we have an app for that"

So you're telling me no one in @apple PR previewed this Adobe demo and was like "guys, let's not force a woman to smile during this."

Are they seriously doing "I wish she would smile more?"

Watching a man photoshop a woman to make her smile more is kind of a cruel joke.

It is so obvious that Apple has very few women on staff because a woman would have been like "uh no. let's not tell women to smile, maybe"

Apple just *had* to make their demo a digital version of “Hey, baby, you’d be so pretty if you smiled!” street talk.

The Apple keynote or: if you can’t get a woman to talk on stage, you can at least photoshop one live ?

Adobe Photoshop Fix. When women just aren’t smiling enough for techbros. Did they not run this idea past anyone?! #AppleEvent

how did someone at Apple OR Adobe not think through the optics of a dude "fixing" a woman's smile?

Adobe VP Scott Belsky, the founder of Behance, took to Twitter to assure people that Apple meant no offense by the demo:

@drew i know team never meant for photoshop demo to be offensive. #1 use of retouch apps is for selfies, intention was to show off the tech

@drew watching live, got excited seeing ppl like feature and retweeted. but I agree, don't like the "make someone smile" context. At all.

After this hoopla, we’re guessing Adobe won’t be proudly showing off this smile-creation feature when it unveils its new mobile Photoshop app in October at Photoshop MAX.

My Hobby: Messing with Nigerian 419 Scammers That Target Photographers