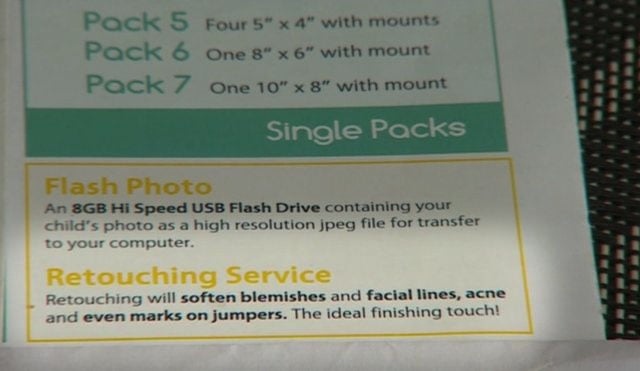 A school portrait photography company in the UK has apologized and pulled its “retouching service” after a mother publicly complained about the service sending the wrong message to children.

“Retouching will soften blemishes and facial lines, acne and even marks on jumpers,” the catalog says. “The ideal finishing touch!”

Norman appeared in an interview with BBC South Today about her complaints:

A company which takes school photographs has withdrawn a "retouching" service after a mother from Worthing complained it sent out the wrong message to children. Alexandria Norman says she was shocked that the service, to soften blemishes and acne, was on offer.

“The photo’s not supposed to be about perfection,” says Norman. “It’s just to capture them at that moment in time.”

It’s “not an airbrushing service,” the photo studio tells the BBC. Rather, it’s “a common feature offered by many photography companies, and is a popular and helpful option to remove marks on jumpers, scratches, glass glare etc”.

Still, because of the negative publicity it received from Norman’s complaints, the company decided to pull the service as an option for parents. The middle school involved has also apologized for the service.

Other parents are speaking out in defense of Yellow School Photos. The top comments in the BBC South Today Facebook post are from parents who don’t believe the photography company should have apologized.

“I really think that this woman should apologize to the school photographers rather than the other way round,” writes Carole McMillan. “The photographers have ended up issuing a public apology for nothing. They weren’t doing anything wrong. […] This has left a business probably losing business when they have done no wrong, parents being denied a choice for their children, and an 8 year old who probably wasn’t bothered in the first place bemused about all the fuss.”

“Yellow has been offering this OPTIONAL service for a couple of years at least, it features red-eye removal, tidying up a cardigan (removing spilt lunch-time bean juice etc), it can also cover up grazes, cuts, that annoying spot that appears on Photo Day,” says Nick Grace. “If you don’t require the service, don’t tick the box. If you do, do. Simple enough.”