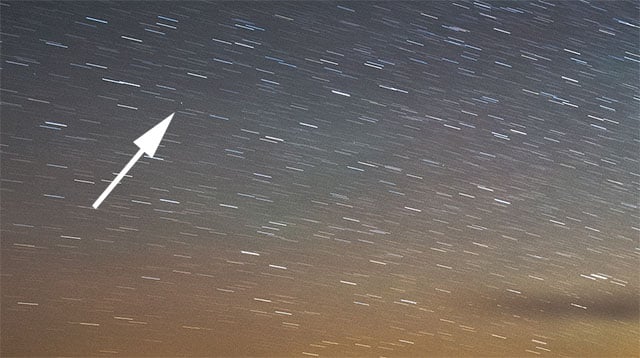 Did you know that you can easily see geostationary satellites by shooting time-lapse photos of the night sky? Reddit user jannne took his camera outside this week and managed to capture a number of satellites in their photos.


Geostationary satellites are those that are always in the same place in the sky when viewed by observers on the ground. Here’s jannne’s animated GIF showing a number of these satellites — they look like stars that don’t move while the other stars show up as star trails (you can find a larger version in this Reddit thread):

A 4-minute exposure time was used for each of the frames. “The satellites are very dim,” jannne writes in a comment on Reddit, but “now is the best time to photograph them since the sunlight hits them face on.”

jannne also notes that these satellites only appear this bright when you capture star trails with a fixed camera. If you use a star tracking rig, the satellites aren’t bright enough to show up well in photos. About 40 satellites can be seen in the original photos. Here’s another animated GIF with some of the satellites labeled:

If you want to shoot geostationary satellites yourself, pick up a timer remote shutter release, go outside on a dark night, and shoot a series of long exposure (~4-5 minute) photos of the sky.

Image credits: Still frame and animations by jannne and used with permission