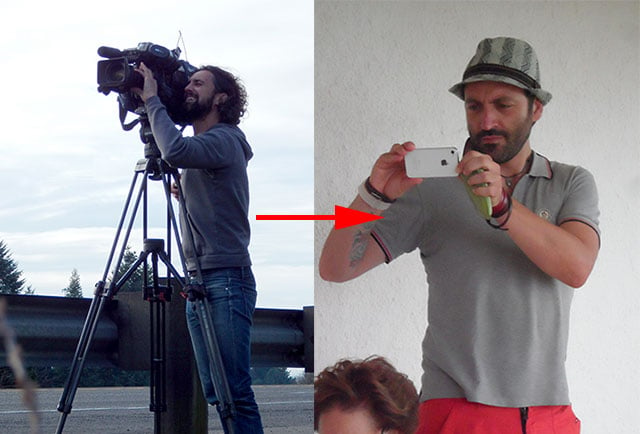 Swiss newspaper Le Temps reports that the TV station Léman Bleu made the major switch this past summer when it outfitted each reporter on the field with an iPhone 6 kit for shooting pre-recorded stories and for shooting live shots.

“It’s a search for lightness and responsiveness, but also a way to reduce the costs of producing a newscast,” the station’s news director, Laurent Keller, tells Le Temps. The station may not even be the first to make this shift: Keller also notes that one Scandinavian news outlet has already gone with an all-iPhone camera roster.

Keller says the new use of iPhone cameras allows reporters to go live from anywhere, both on air and online. “It’s up to us to reinvent the grammar of the image, to learn to shoot differently,” Keller says. Since the station is only on air for a few hours each day, this move to iPhones will allow reporters to capture and share much more content for online channels.

A similar experiment was conducted in the US by Charlotte’s Fox46 back in 2014, but they pulled the plug due to the quality of the result. “Plagued by technical problems and relying on journalists with little experience, it had an amateurish quality,” the station reported afterward. “Viewers turned away.”

It’s not just TV news that’s moving toward smartphones: print has been as well. Back in 2013, we reported that the Chicago Sun-Times was planning to train all its editorial employees in “iPhone photography basics.” So far, however, we haven’t heard of any media company dropping all their high-end still photography cameras in favor of photojournalists shooting solely with iPhones.

(via Le Temps via NewsLab)

Image credits: Header photos by the Oregon Department of Transportation and Luigi Barone

My Girlfriend Shot Her Own Engagement Without Knowing It