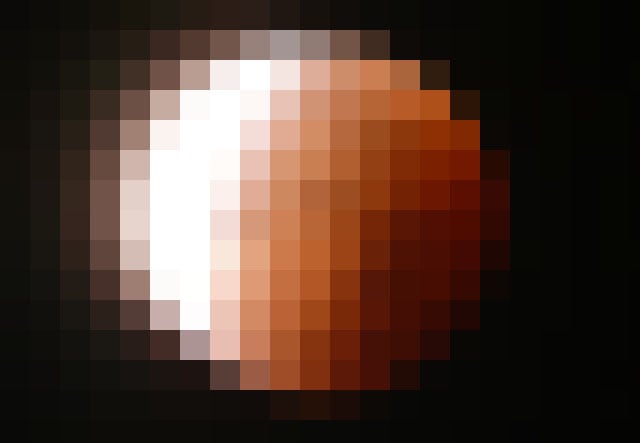 Most people use their smartphones as their go-to snapshot camera these days, and the impressive image quality of the latest models is great for recording everyday memories. The small sensor and lens do have their limitations, though, and quite a few people found that out last night when they pulled out their smartphones to photograph the supermoon lunar eclipse.

As the world oohed and aahed at the ultra-large eclipse, the Internet became flooded with poor quality smartphone photos showing the blood moon as a pixelated blob of color. Both famous journalists and the general public alike bemoaned their failed photos:

Mmmmm not @neiltyson approved but I tried! #Supermoon pic.twitter.com/sT3JeJRehl

@katiecouric I tried my best too pic.twitter.com/uOlcCrcrt6

Fox reporter Heather Hegedus hopes smartphone cameras will be up to the task by the next supermoon lunar eclipse in 2033:

Maybe by the next #Supermoon smart phones will take better pictures of the sky! Who knows what 2033 holds! #Fox25 pic.twitter.com/zMaTT0AD9G

Well, wish I had a better camera with me rather than my iPhone, the #Supermoon is awesome! pic.twitter.com/52IpmiV5q8

Thanks, iPhone. For this super awesome, high quality photo of the #Supermoon ?? pic.twitter.com/HyfYZjxmtp

…but older iPhones struggled to keep up:

Trying to take a pic of the moon on an iPhone 4s: #fail #Supermoon pic.twitter.com/VHvxnXFdOB

@SeanBattySTV my iPhone turned the super moon in to a super nova! pic.twitter.com/6jjuKvAo5F

Quality like no other. A supermoon at its brightest phase. Shot on IPhone 4. pic.twitter.com/cY9BDoMvdq

The blurry blobs in the photos are reminiscent of NASA’s early photos of Pluto when we could only photograph it with the Hubble space telescope:

Not a spectacular photo [email protected] phone but the big orange ball is rising! #supermoon pic.twitter.com/Ux5ClVsDZc

And from far away on a sub par smartphone. #Supermoon #astronomy pic.twitter.com/jFSUeYwzJQ

Definitely worth waking up for #Supermoon #LunarEclipse ! pic.twitter.com/x4sf8KkSnl

Here's mine now show me yours #LunarEclipse #Supermoon pic.twitter.com/wsnC48BSrm

Here’s what people had to say:

If I see one more dodgy iPhone photo on fb of the super moon I'm going to scream.

am i the only person who didn’t take a blurry iphone photo of the supermoon eclipse last night?

While the vast majority of smartphone snapshots from the eclipse didn’t turn out well, some did — namely, those who attached their phones to telescopes and other serious lenses to shoot at a much greater focal length:

Moon eclipse tonight at the Allen Telescope Array #ATASETI. Taken with my iPhone and a 60mm telescope. pic.twitter.com/oKB7496Xmj

Last night's eclipse, photo by my 16-yr-old. Not bad for an iPhone held up to a telescope's eyepiece. #LunarEclipse pic.twitter.com/xmZsauTw2N

Needless to say, if you’re planning on capturing your own photographic memento the next time a lunar eclipse comes around, you might want to invest in either some serious camera gear or a powerful telescope instead of relying on the camera on your phone.

The First Photo of the ISS Transiting a Lunar Eclipse