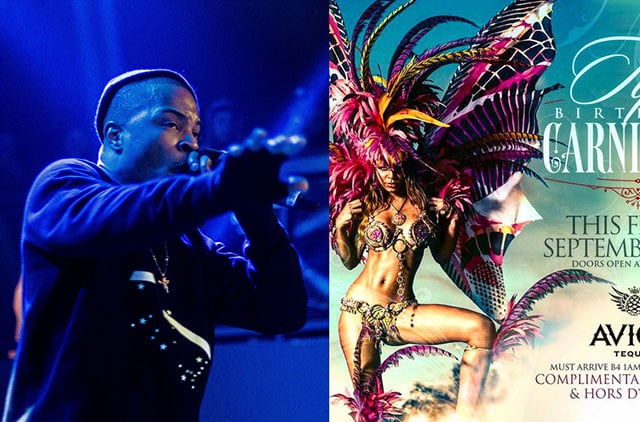 Rapper T.I. is being criticized by photographers after using a photo without permission on advertising for a party and then getting into an online dispute about the infringement.


The whole thing started last week when Laura Ferreira, a fine art photographer from Trinidad and Tobago, found out that one of her photos of a woman in a carnival costume was being used by the US-based rapper to promote a big party he was throwing.

“I first messaged him to see if he could credit me for my image, and commented the same request on the image as well,” Ferreira tells PetaPixel. “I did the same on Facebook when I discovered that he had it there as well.”

When T.I. didn’t respond to her messages, Ferreira asked her friends and followers to comment on T.I.’s Instagram photo to ask him to “give credit where credit is due.”

That’s when things escalated. T.I. posted a second image to his Instagram page. This one didn’t use Ferreira’s work, but it made it clear that the rapper knew what was going on.

“The caption showed that he was very aware of the requests, but said that I should be honored by him using my image and think of it as an ‘homage’,” Ferreira says. 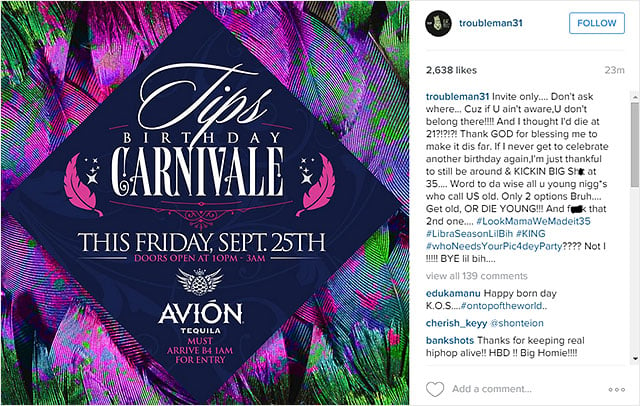 T.I. also posted a lengthier rant on the original photo as well. It has since been deleted, but here’s a screenshot by Looptt: “I didn’t steal s**t from nobody and I never have,” the rapper writes (with slight editing for spelling and grammar). “Throwing a party with a theme as you can see.”

There’s a team of people responsible for planning and arranging the festivities for this party… Obviously and commendably @lauraferreirastudios had the best and most impressively appropriate images that relate to the theme of the party, which lead to the planners using the images.

Which in itself is them paying homage to your work. Let’s be clear guys. It’s a party invite! Not album or even single artwork, not tee shirts we plan to sell, not framed and sold for our benefit… It’s a party invitation, guys!

I’ve seen world famous photos of worldly iconic figures used to invite people to parties all the time and with the photographs photoshopped and altered which takes away from the integrity of the art.

Yall ni***z better chill out! I ain’t wit it! And gold star to me for taking da time out to address dis in such a calm manner.

Ferreira responded by saying that paying homage involves giving credit where credit is due:

But paying homage means crediting the artist, and that’s all I was asking for. I’m sure you’d want people to credit you for your music. We put a lot of work into our craft, be it visual or musical.

“T.I. also called me a b**ch and says that nobody wants to use my photo for their party anyway,” Ferreira tells PetaPixel, “but he used my photo in his party.”

Ferreira tried reporting the photo to Instagram and Facebook, but was ignored by the companies. She also emailed T.I.’s publicist but didn’t receive a response there either.

The next day, Ferreira woke up to find emails pointing her to a new video online. It was a video from T.I.’s birthday party, and Ferreira saw her photos being displayed on the walls in a giant size. Here’s a shot of T.I. in front of a print:

Ferreira then decided to seek the advice and assistance of a lawyer in the United States. A phone call from that lawyer yesterday finally resulted in the photo being taken down. Ferreira is now considering her next steps in how to deal with this case of copyright infringement.