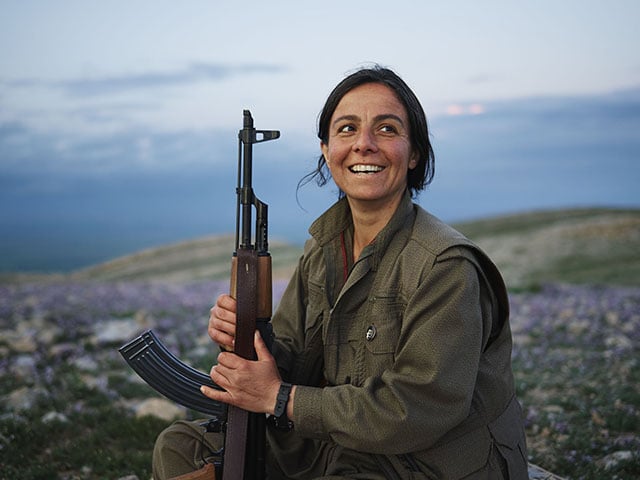 Back in June, we shared a series of photos by Joey L., who made a dangerous trip to Kurdistan to point his camera at the Kurdish guerrilla groups fighting in the Syrian civil war.

It turns out that many of the photos violate Instagram’s policies, not because they show violence or graphic scenes, but because they show members of PKK, a group that’s listed on “terrorist” lists. Joey L. isn’t pleased with the policy.


Joey writes that the Instagram deletions came after people continuously reported the images and spammed his social media accounts with death threats and graphic photos of dead people.

However, I do wonder about those who continually report my photos, & spam my social media w death threats & graphic pictures of the deceased

Joey also returned to Instagram to repost one of the deleted photos, this time in his hands as a print — it’s a print that will be featured at the National Portrait Gallery in London later this year:

“This is the same image that was reported multiple times on my feed, and then removed by Instagram for breaching community guidelines,” Joey writes. “@instagram has the right to remove whatever they want, and quite frankly I don’t expect them to determine who is a ‘terrorist’ and who is not.”

“However, I do wonder about those who reported the photo.”

“Photography should be a conversation starter of intense dialogue and debate, but never silence,” he continues. “Silence is for cowards.”

Thank you @NPGLondon for choosing to display this image. /end

Joey tells PetaPixel that a number of photos from his project were left up by Instagram because they showed a different group called the YPG. That group is also fighting in Syria, but they aren’t on a designated “terrorist list,” Joey says.

“We do not comment on individual accounts,” says a spokesperson, “but we can state that Instagram prohibits the support of terrorist groups by pointing to our Instagram Community Guidelines, which states, ‘Instagram is not a place to support or praise terrorism, organized crime, or hate groups.'”

You can find photos of the original project here and on Joey’s website.