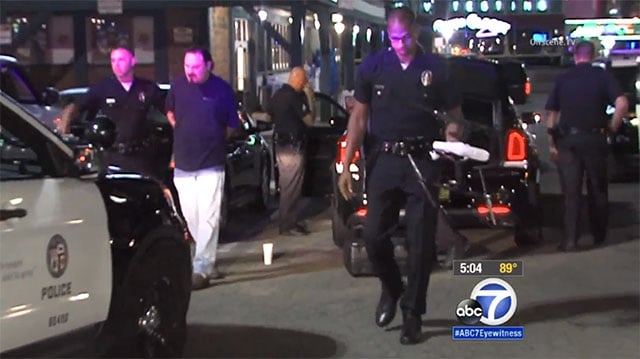 We’ve heard of quite a few close calls between drones and aircraft over the past few years, but this latest one was an extremely close call that actually resulted in an arrest.

A hobby camera drone operator was arrested in Hollywood late last month after flying his drone within 50 feet of an Los Angeles Police Department helicopter that was searching for a suspect.

ABC7 reports that the incident occurred at around midnight on Friday, August 28. An LAPD chopper that was searching for a suspect was forced to take evasive action after a “drone swooped in within 50 feet” of it, say authorities.

“This was the first time and most egregious time where it has actually came into our airspace in such close proximity,” LPAD Air Support Captain Al Lopez says.

The close call sparked a new all-out manhunt for the pilot behind the drone. Officers eventually found the drone pilot in a Rite Aid parking lot, confiscated his DJI Inspire drone, and took him into custody.

The FAA was notified of the incident, and authorities are now studying the man’s camera footage to determine if the flyby was intentional — if so, he could be charged with assault with a deadly weapon.

A bird strike reportedly crippled an LAPD chopper for three weeks in early August. Authorities are warning that a collision with a drone could result in a tragic and fatal accident.

TrailerCam: A Box Trailer Turned Into an Ultra-Large-Format Mobile Camera

My Metadata Fail, or: Why You Should Always Check the Copyright Info on Loaner Gear