Washington D.C.-based wedding photographer Sam Hurd has quite a wild backup system for his clients’ images. In an article and video Hurd posted on his blog, he explains the extensive setup behind his apocalyptical-style backup protection. If you thought you had your files well protected, you might feel otherwise after watching this (unless you’re careful to the same degree).

“Essentially, I have 4 copies of everything by the time it’s all imported into Lightroom,” Hurd writes. “It’s a bit confusing to take in all at once, but nearly everything is completely backed up automatically for me other than my yearly archiving.” 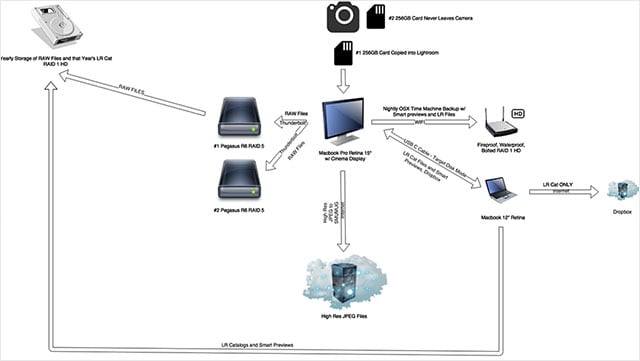 When Hurd returns from a shoot with his camera, he transfers one of his two SD cards to his Macbook Pro; the second card remains in the camera at all times. Once on Hurd’s Mac, the RAW files are backed up to two Pegasus RAID 5 configurations. JPEG files are also transferred for safe backup. A fireproof, waterproof RAID 1 drive backs up the entire machine nightly including smart previews and Lightroom files. If that wasn’t enough, his second Macbook acts as an external disk connected to Dropbox.

How NOT to Mount a Lens to Your DSLR

On Feeling Inadequate as a Photographer