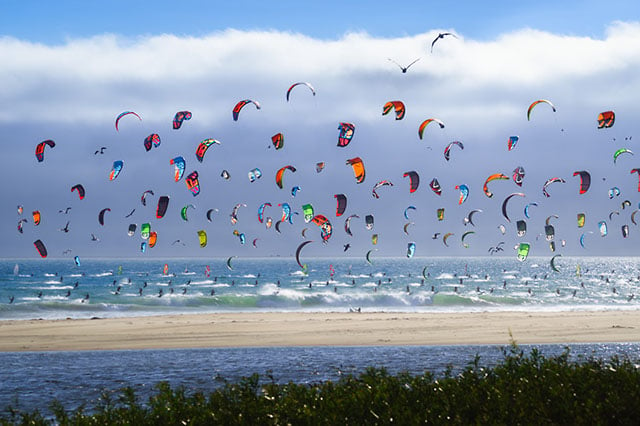 Photographer Casey Mac created this wild image by shooting ~800 photos of kite boarders at California’s Waddell Creek Beach and then blending the shots together in Photoshop. The photo is titled “Rush Hour.” (Here’s a larger version.)

“On this day, I estimate around 40 kiteboards filled the ocean,” Mac writes. He set up his camera on a tripod, set it to time-lapse mode, and shot one photo every second.

“They move quickly, so 1 second was enough time to allow plenty of separation between shots, but still keep the cloud positioning mostly the same,” he says.

After about 800 shots over 10 minutes, Mac’s two 32GB memory cards were filled up and he headed home for the next step.

Using a combination of Photoshop and Lightroom, Mac blended the photos onto a blank canvas. He used simple layer masks at first, but had to begin paying more attention to detail after the frame began to fill up. 9 hours of editing went into masking and selecting the 102 kite boarders seen in the shot.

“Duplicates do exist, and I tried to space them equally across the frame so as not to draw the eye to one particular area of the sky,” Mac says. “I did no warping or moving of any kites and all kites exist where they did at the time the blended shot was taken.”

You can purchase prints of “Rush Hour” over on Mac’s website.

Image credits: Photographs by Casey Mac and used with permission

The Art of the Portrait: My Journey to 100 Portraits in 100 Days