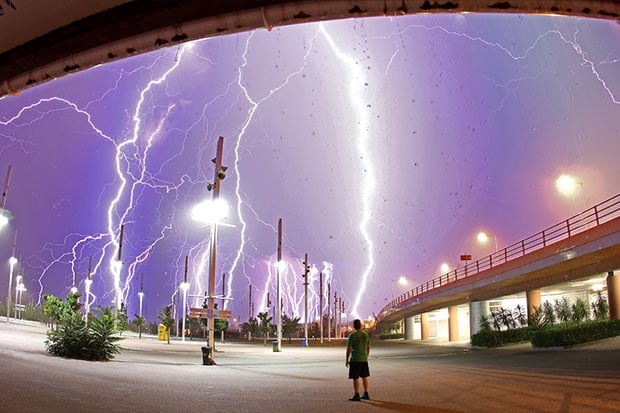 Chris Kotsiopoulos of GreekSky made this crazy lightning photograph by stacking a large number of separate shots. He tells us,

It was past midnight when I heard from my home at Halandri, Athens an unusual rate of thunders (one every 7-8 seconds!) coming from the Olympic Stadium area 2-3 kilometers away from my home.

Without second thought, I grabbed the camera and the tripod drove quickly to the spot. I set the camera under a tent and I started taking continuous shots. I used an intervalometer so I didn’t have to be behind the camera all the time. I even took a chance by placing my self in the field of view in one of the shots. Fifteen minutes later, it started to rain and the storm was approaching, so I found shelter under the bridge at the right. Finally after 32 minutes, among the hundreds of shots taken, I captured 51 lighting strikes (9 shots where destroyed because of the excess brightness). The photo processing was fairly simple. I stacked the 42 lighting shots with Startrails software, and did some minor improvements with Photoshop.

We’re glad he took the risk of standing in his photo — it’s not often you see one of these shots with people in them. If you want to learn more about how to create this kind of photo yourself, check out this lightning shooting tutorial we posted a while back.

Image credit: Photograph by Chris Kotsiopoulos and used with permission

Protect Your DSLR with Body Armor