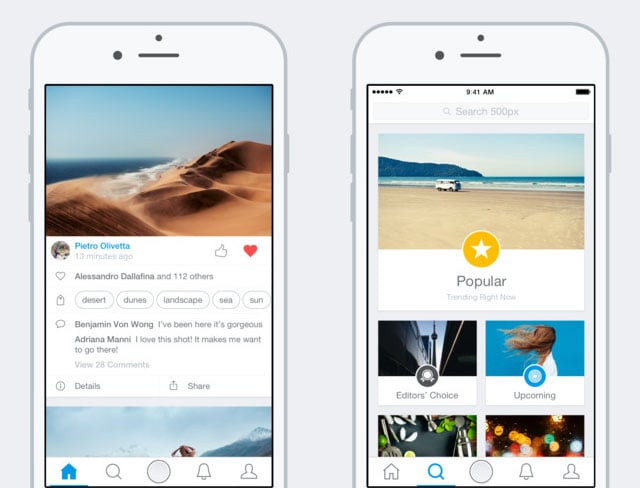 Earlier this month, the photo sharing service 500px rolled out a new version of its iOS app that focused on sleekness, simplicity, and social sharing. Media outlets immediately pointed out how similar the new app’s look and feel is to other services, particularly Instagram.

Unfortunately for 500px, it seems that many users aren’t responding well to the change: the latest version of the app is getting slammed by reviewers in the iTunes App Store. Originally rated 4/5 stars with nearly 3,000 ratings, the 500px iPhone app has plummeted to 2/5 stars with the latest update, and more than half of the ratings are 1 star.

Here’s a sampling of the reviews that other users have found “most helpful”:

“Oh. Ohhhhh no.” (2/5 stars by Gwinkle)
Just joined the 500px website about a month ago. Fell in love and the app was such a great extension of the website. Having only been with the site for a matter of weeks, I can honestly say my disappointment with the new redesign isn’t rooted in some longstanding, rigidness for what I’m used to. I’m too new to feel any deep seeded connection to the last version. But that said, I still can’t feel the update is a major stumble. Way too much text on the home page. Distracting and disproportionate. The photos should still be the focus even if you’re trying to make likes and social interaction more accessible. There must be a better way than to have so much space between each pic clouded with so many tags and options. Just obnoxious. The rest of the app I’m sure I’ll get used to in time, and there are some improvements to be fair, but it feels slower and sparser on options compared to the previous version. My old excitement for jumping on the app has been replaced with a growing annoyance.

“Should have released 3.0 before 4.0” (1/5 stars by Ambushd)
Whoa! Perhaps it’s my fault for not writing a review on the previous version of 500 and letting you know what a great app it is, or shall I say was. It’s probably also my fault that I have the auto update app function on and assume by now that app designers have evolved from completely changing everything just because. Where to start… white background? Why? That alone will deter me from using the app. My favorites? Gone. What was wrong with a pull down categories menu? Now you’re treating me like I’m 5 years old giving me examples of what a category image might look like. I don’t want to see the comments and keywords unless I want to see them. I’m so glad that my iPad doesn’t update automatically because I don’t think I would use this new version. The images are the eye candy, not the app. It’s probably too late but I give the previous version 5 stars and this one zero.

“Redesign ruins the best part of 500px” (3/5 stars by fbara)
I really enjoyed simply scrolling through the app and looking at all the pictures, tapping the ones I like to make them full-screen, then scrolling some more. I was able to better appreciate the artistry of the photos because that’s all there was, me and the photos.

The recent app redesign has really messed that up. I’m on an iPhone 6 yet I can only see 1 image at a time, sandwiched between large chunks of text, hearts, thumbs, and chat bubbles. What were you thinking?

I’m very disheartened that an app that helped celebrate the art of photography now covers your view of that art with ugly text and Facebook-style clip art.

The consensus among the critical reviewers appears to be that the new design detracts from the experience of enjoy photos by cluttering the screen with additional text and information.

If you’re a longtime user of 500px iOS app, what are your thoughts on the update?

Less than a month after releasing its latest update, 500px announced that it had raised another $13 million in funding, which will help it fight against the likes of Flickr, EyeEm, and Getty. The company is pushing hard into international expansion and making money by helping photographers license their photos to buyers.

The Art of the Portrait: My Journey to 100 Portraits in 100 Days

Is Shooting 4K Resolution Worth It for Web Video?