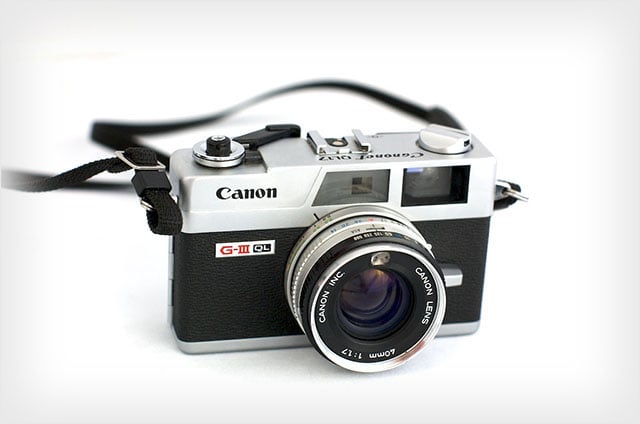 In January of 1961, Canon introduced the Canonet, a consumer-friendly 35mm film rangefinder camera aimed at the average person. Over fifty years and fourteen variations later, film photographers still look back on the Canonet as an excellent choice for beginning and experienced photographers alike. Let’s travel back in time to see how it all began and why the Canonet remains popular even today.

By the 1960s, Canon had introduced a number of film cameras that were well-suited for professional photographers, but the company wanted to branch out from their primary lineup of advanced cameras with an easy-to-use device. The idea of a camera for the masses birthed the original Canonet, which was priced at 18,800 yen.

The first Canonet from 1961 incorporated the company’s ‘Electronic Eye’ metering system, which involved wrapping the exposure meter around the lens itself. Canon claimed the meter would perceive light in the same way the lens saw it, thus creating a more precise automatic exposure.

“Actually it’s a lot easier to put the electronic eye in a rectangle somewhere on the camera. (Most equipment makers do.)” Canon said in one of their 1961 advertisements. “It’s also less expensive – but it’s not good enough for us. Or you.”

Canon showcased the camera’s ability to quickly take photographs without the need to twiddle with dials and settings. Just frame your shot and click the shutter to capture memories. Or, set the camera to shutter-speed priority and use the built-in light meter to adjust the image.

“If that isn’t enough: when the Canonet is on automatic, it won’t shoot if the setting isn’t right for the light available.” Canon advertised. “That could save you a lot of film, and eliminate those depressing moments some people have when the film comes back.”

The original 1961 Canonet took the market by storm. Manufacturers were shocked by the integrated technology and fast 45mm f/1.9 lens offered at such a low price. According to Canon, when the unit went on sale in Tokyo, the company’s week’s supply of camera stock was sold out in less than two hours.

A more compact and fully automatic variation of the Canonet, the Canonet Junior, was released two years later and only featured the single ‘program’ mode without the ability to adjust the shutter speed manually. An SLR Canonet, the Canonex, was also released to compete with the rise of SLR style cameras, but it was not as well received as the rangefinder.

The official successor to the original Canonet came in 1964 and was dubbed the Canonet S. This new model included a faster 45mm f/1.7 lens and moved the film advance level to the top of the unit rather than the bottom where it was previously located. Canon also switched the selenium exposure meter over to a cdS exposure meter that was more sensitive to low light for shooting in the evening.

With new improvements, the more efficient and easier to use Canonet QL17 was manufactured a year later after the Canonet S debut. The QL17 featured a complete redesign of the previous unit’s internals and came with a ‘Quick Loading’ mechanism for loading film. The new model also did away with Canon’s ‘Electronic Eye’ with a smaller individual element placed at the top of the lens.

Canon’s Quick Loading system soon became one of the series’ leading features. Users simply needed to place their roll of film into the back of the camera, pull the film strip across to the right side, and then close the unit. The camera system would then automatically spool the film and advance it to the first frame.

The next major successor since the Canonet QL17 was announced in 1969 as the ‘New Canonet QL17’. Canon decided to focus on making the Canonet a more lightweight and compact series. It was 30% lighter than the previous Canonet QL17 and had a slightly smaller body. The New Canonet QL17’s major addition was the company’s fully automatic flash system, Canon Auto Tuning System (CATS).

A year later, Canon released the QL17-L — where the “L” stood for “Luxury”. The QL17-L was identical to the New QL17 but featured a battery button that allowed users to check the unit’s power level via the viewfinder.

The final variations of the Canonet series were produced in 1972 with the Canonet G-III 17 at the forefront. Acting as the third-generation in the Canonet GL17 series, the new model included a ‘check battery button’ next to the viewfinder. The G-III 17 was manufactured for the next eleven years and sold over 1.2 million units worldwide.

Consumers who were looking for a cheaper option had the G-III 19. Costing 30% less at launch, this variation of the Canonet was similar to the G-III 17, but featured the slower 45mm f/1.9 lens and lacked the new ‘check battery button’.

Since its debut in 1961, the Canonet series was a well-produced camera lineup that has stood the test of time and remains a popular option for film photographers. Its accurate metering and quick loading system put it a step above competing brands of the time.

To top it off, the Canonet was a very strong-selling series, with many units available on the market. As the law of supply and demand dictates, this meant Canonet cameras were able to be purchased at an affordable price.

Today, the Canonet rangefinder might not be the best camera available when compared to higher-end options such as Leica’s offering, but for the film-loving street photographer on the move it is still a great camera for shooting. The Canonet G-III 17 and its predecessors will undoubtedly continue to live on for quite a while.

If you are just getting into film photography or want to try out a bit of history, Canon’s Canonet series is an excellent place to start. Take a look at listings on eBay if you’re interested in purchasing one for yourself.