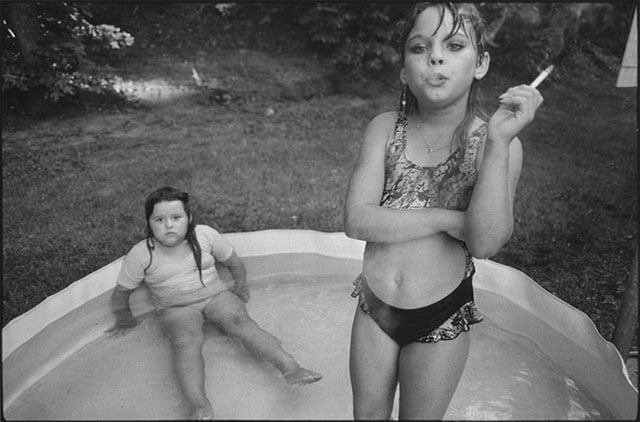 In 1990, the late American photographer Mary Ellen Mark captured a photo titled “Amanda and her Cousin Amy,” which showed a 9-year-old girl named Amanda smoking a cigarette while standing in a swimming pool with her 8-year-old cousin, Amy. It’s a striking photo that became one of Mark’s most famous works, but have you ever wondered what became of the two girls?

After Mary Ellen Mark passed away late last month, NPR decided to dig into this particular photo and find out more about the subjects in the shot. They found out that the then 9-year-old smoker is now 34-year-old Amanda Marie Ellison of Lenoir, North Carolina.

It turns out Ellison remembers posing for the shot as a child, but she lost track of Mark and the photo for 25 years until Mark’s passing. Last month, Ellison rediscovered the shot after it was posted to her Facebook page.

Here’s a 4.5-minute segment that aired on NPR’s Weekend Edition Saturday that sheds more light on Ellison and the iconic photo she was captured in two-and-a-half decades ago:

Don’t Let Snapshots Keep You From Seeing the World