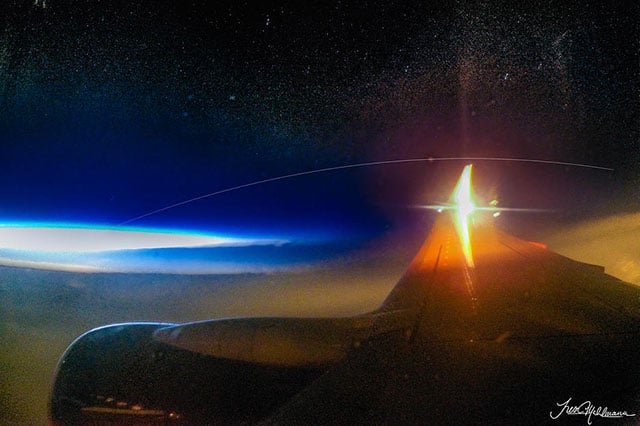 This is impressive: photographer and aspiring astronaut Trevor Mahlmann was sitting in the seat of an airplane at 40,000 feet this past Tuesday when he managed to plan and shoot this stacked long-exposure photo showing the International Space Station whizzing by.

Mahlmann writes on his blog that he was on a Southwest flight from New York to Chicago when he had a thought: “Hey, what if the ISS is going to pass over me while I am flying?”

Using the airplane’s Wi-Fi, he logged into an ISS tracking website called Heavens-Above. Lo and behold, the site showed that the space station would be flying over the northeastern United States at 10PM, 30 minutes later.

After doing some estimates and calculations on his position at the time of the pass, Mahlmann did some test shots with his GoPro HERO 4, used his sweatshirt to block out cabin light, and then captured 10 minutes of 30 second exposures when the ISS was supposed to be flying by.

Once had the frames — and while still soaring at 39,996 feet — Mahlmann took the camera’s microSD card, combined 12 of the 30 second exposures together with StarStax, and then tweaked the final result in Adobe Lightroom. Voila! A photo from a plane showing the ISS soaring by as a light trail:

After sharing his image online, NASA liked the shot so much that they retweeted it with the official ISS Twitter account.

“That is how you rush to capture the International Space Station when you are flying at 40,000 ft above the Earth,” Mahlmann writes. You can find a more detailed account of how this impromptu project was done on his blog. You can also connect with him on Twitter and Instagram.

Image credits: Photographs by Trevor Mahlmann and used with permission

Hasselblad Lusso to be a Luxury Rebranded Sony a7R