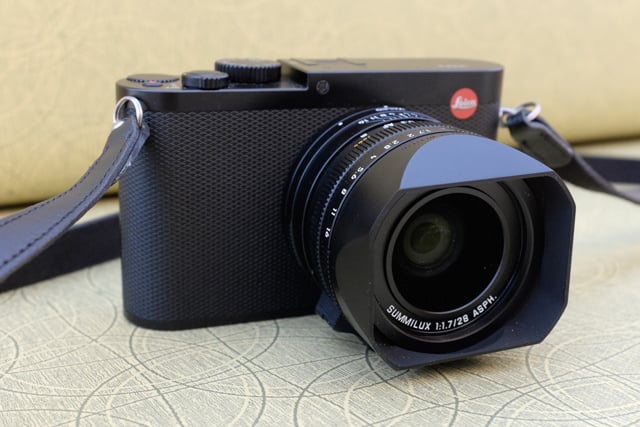 Leica officially announced their new full-frame Q series camera this morning. The beautifully compact unit features a 24-megapixel sensor and built-in Summilux 28mm f/1.7 lens. Designed for performance on the go, we got a chance to sit down with the Leica Q and get a better feeling for its aluminum and magnesium alloy constructed body. Does the Leica Q feel like $4k? We are going to find out.


If you have ever picked up a Leica M camera before, you know that they are well crafted, yet chunky and heavy, bits of kit. Picking up the Leica Q feels exactly like picking up the smaller and younger brother of the Leica M. At 640g, the unit is heavier than its competitor, the Sony Cyber-shot RX1, but not much heavier; just enough to create a sense of heightened worth and quality production. 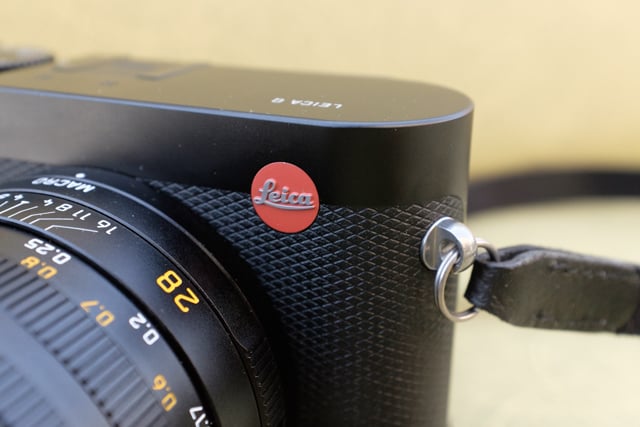 At our meeting with the Leica design team in New York, we learned that the company felt the primary audience for the Q would be street photographers; also those shooting general landscapes or architecture. As a street photographer myself, I quickly fell in love with the unit’s size and performance; it feels like this camera could be used for just about anything, excluding sports. The included high-quality leather strap felt like icing on the cake, a comfortable accessory for the German craftsmanship hanging around your neck. 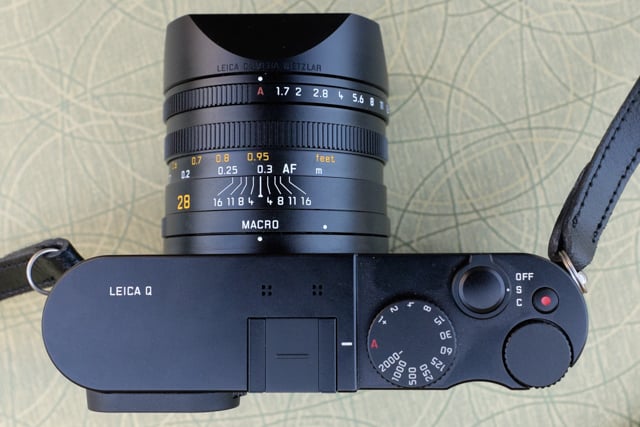 The Leica Q body features a minimalist design reminiscent of the legendary M series. On top, you will find a hot shoe, shutter speed dial, video record button, on/off switch, shutter button, and a view of the command dial. All of the dials turn with satisfying clicks; none can be easily bumped, but you also won’t have a hard time adjusting them. The on/off switch is home to three positions: off, single shooting (S), and continuous shooting (C). Two stereo microphones are also built into the top of the unit for the unit’s 1080p video capture mode. 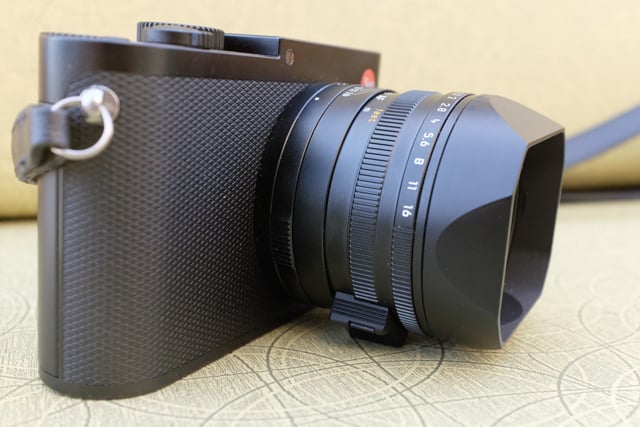 The front remains minimalist with a textured grip surface that makes handling the camera a joy. From this angle, we can see the side of the built-in Summilux lens. Looking at the bottom of the lens, we see a notch for your thumb; this allows you to easily adjust focus when shooting in manual focus mode. A button can be depressed on the notch itself that acts as a lock for switching between automatic focus and manual focus, which is the last click on the ring itself. 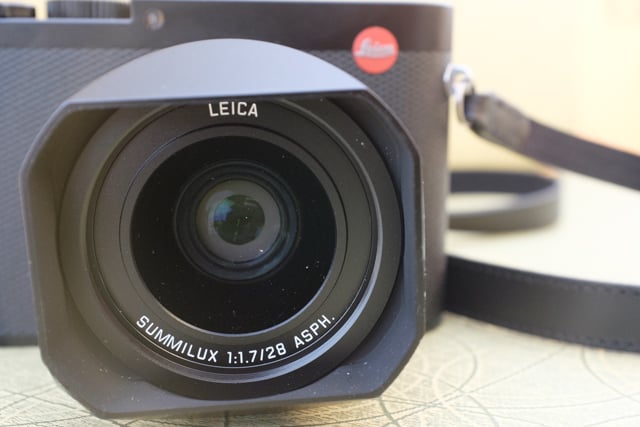 The Leica Summilux 28mm f/1.7 delivered excellent images in our brief testing with the unit. Even when examining the RAW files directly from the camera – photographs had a fantastic amount of natural saturation and contrast. As expected with a Summilux, our pictures were incredibly sharp and detailed. Chromatic aberration is so minimal that it doesn’t even feel worth noting. 28mm f/1.7 is simply a lens well worth its price tag. 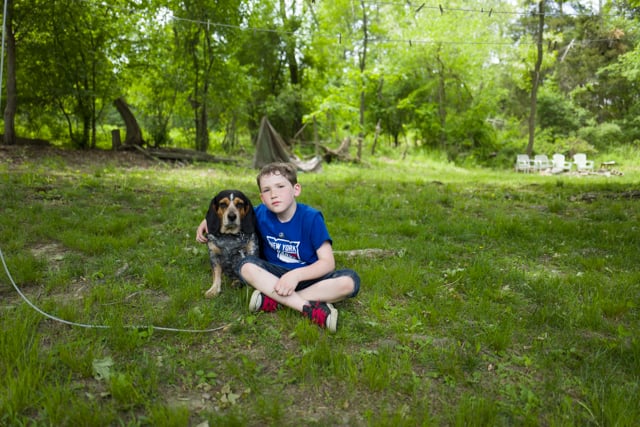 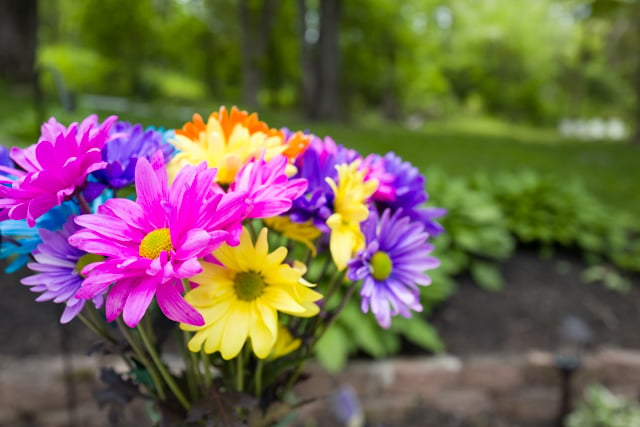 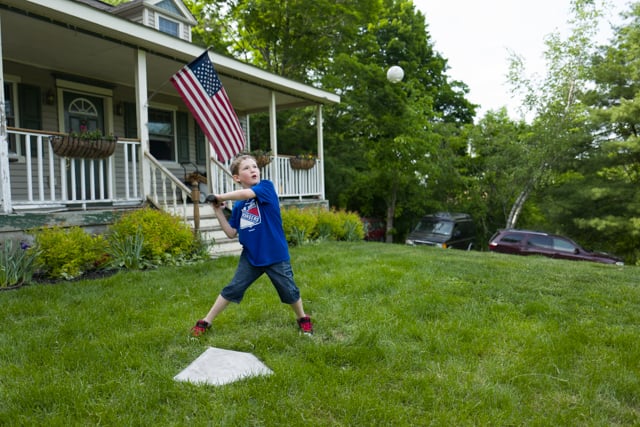 Besides the aperture control and focus rings included on the lens barrel. Photographers can twist a macro ring to obtain an entirely different range of focusing distances. Once twisted, the focus distance markings completely change to aid you in your endeavor. Using the camera’s built-in peak-focusing, we were able to easily shoot a close up macro shot of a caterpillar. Remember, all of these images are straight out of the camera and nothing has been adjusted. 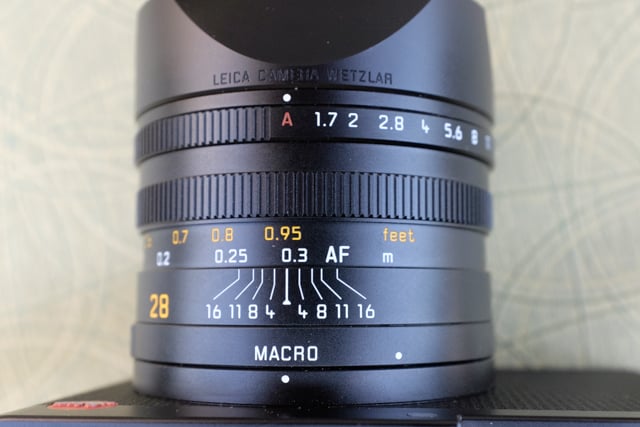 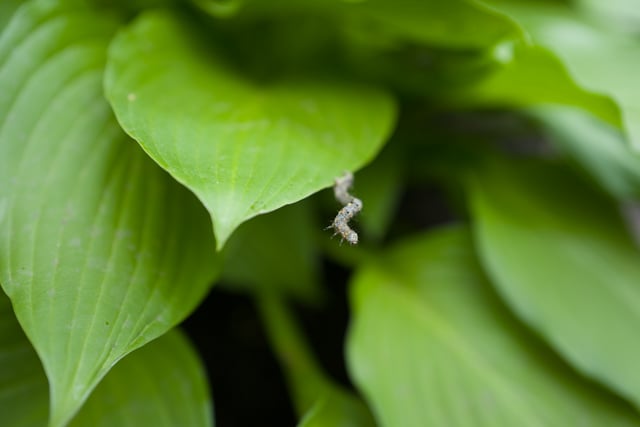 The lens hood pictured throughout this hands-on preview can easily be removed if it is not your preference. During our entire time with the Leica Q, we opted to shoot with the lens hood on to protect the unit. As expected, the hood is crafted from a sturdy, yet lightweight, metal. When attaching to the unit, you simply screw the lens hood on to the body. It is as easy to install as it is to remove when needed. 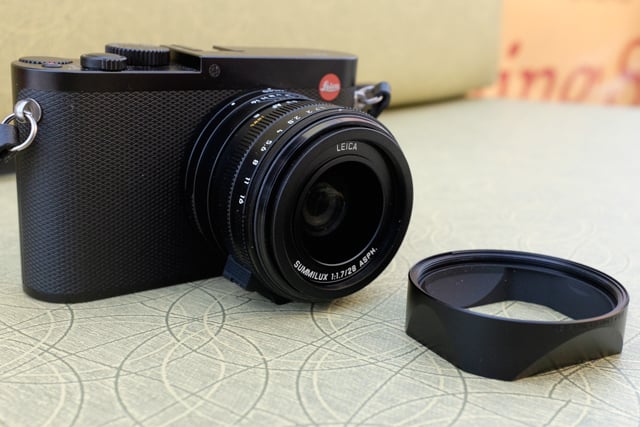 The included lens cover can be used whether or not the lens hood is attached. The cover is also made of metal and features an inner felt lining to protect the Summilux lens from any accidental scratches. We did find that when applying the lens cover with the lens hood attached you had to be a bit careful, as it was a snug fit and had a knack for pulling at the felt covering. 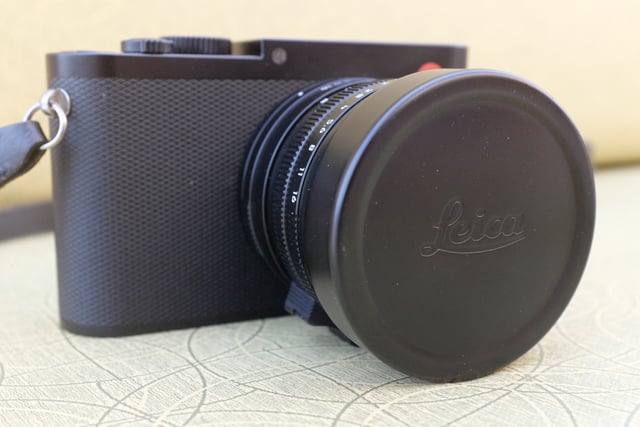 While a single focal length is not for everybody, Leica tries to slightly ramify the situation. A small button on the back of the unit allows you to easily use digital cropping to simulate 35mm and 50mm focal lengths. Because you are taking advantage of digital cropping and not optical magnification, you will lose resolution in your result. When shooting, instead of the entire display zooming in, you are treated to rangefinder-style lines that show you what portion of the screen you will be capturing. 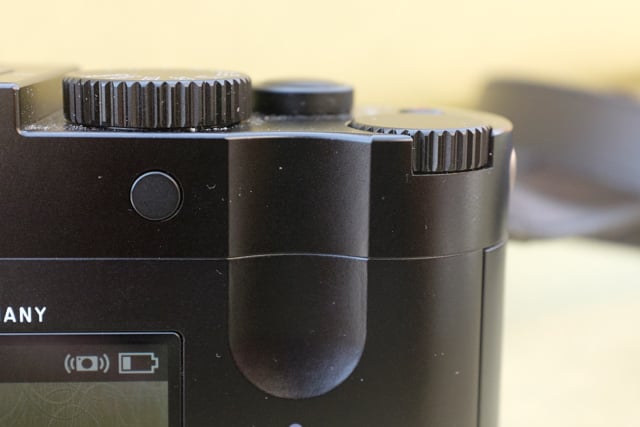 The back of the unit contains the remainder of your controls including play, delete, fn, ISO, and menu buttons, and a four-way selector dial. Each button has a satisfying click to it and is raised just enough so you can easily discern them from one another without needing to look at the unit. A large 3″ 1,040,000-dot LCD touch screen and a 3,680,000-dot EVF can also be found here. As of now, the Leica Q has the highest resolution EVF when compared to all other mirrorless cameras. 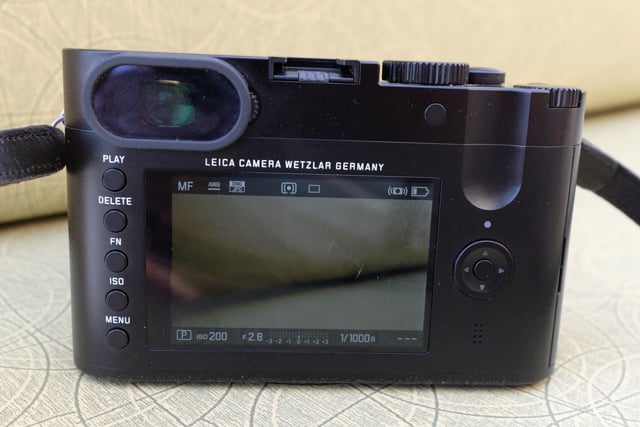 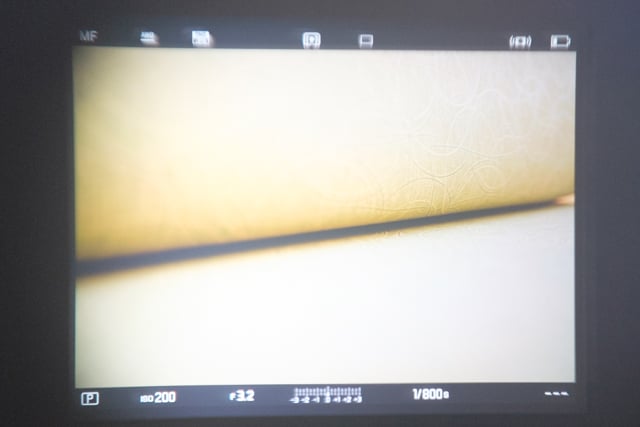 The internal EVF is bright and has a refresh rate that is essentially invisible to the eye. Shooting with the Leica Q makes you wonder why you would ever want to go back to an optical viewfinder again. The EVF eye sensor is also quite fast when you hold the unit up to your face; there is hardly a delay.

The touchscreen can be used for quickly selecting a point of focus on screen or for browsing your recently shot photographs. The screen is multitouch, so pinching to zoom on photos is possible. While a nice addition, I found myself ignoring the touchscreen for tactical control for the majority of my hands-on experience. 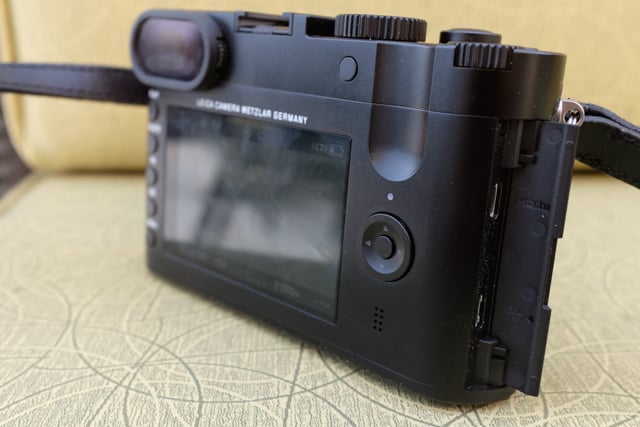 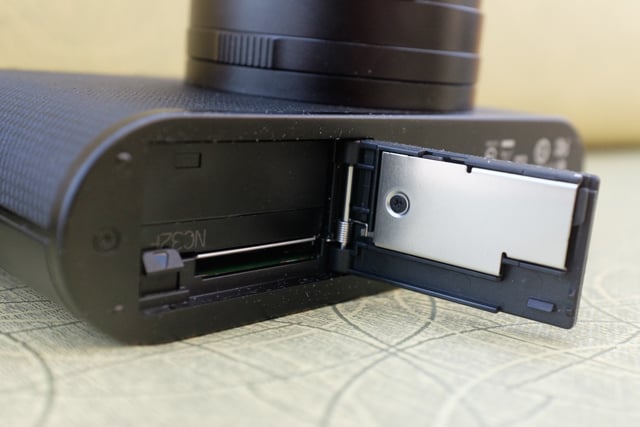 The camera has two doors, which allow access to ports, the SD card, and the battery. The Leica Q’s side door will allow quick access to a USB and an HDMI port. The bottom of the unit houses the battery, along with a single SD card. For more test photographs from the Leica Q, be sure to visit the official PetaPixel Flickr page.