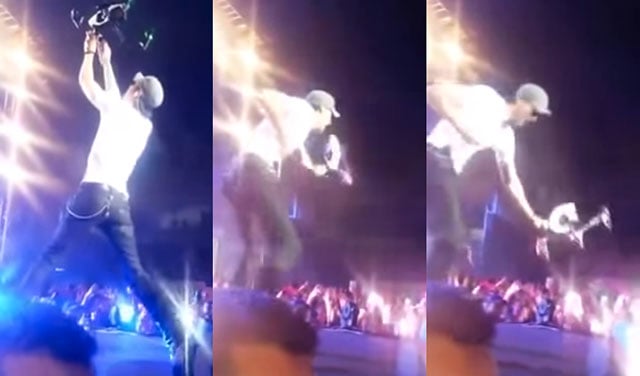 Camera drones can be dangerous if not handled properly. Singer Enrique Iglesias found that out the hard way yesterday during a 12,000-fan concert in Tijuana, Mexico. During one song, Iglesias decided to reach up and grab hold of a camera drone hovering above him in order to give the fans a live point-of-view shot. Things didn’t go as planned.


The DJI Inspire 1 drone took a dip while Iglesias was holding it, and some of his fingers were in the path of the blades. Iglesias quickly pulled his hand back in pain, throwing the drone to the side of the stage with his other hand.

A couple of concertgoers captured the incident in cell phone videos (warning: it’s painful to watch):

The Associated Press reports that Iglesias received some minor treatment at the side of the stage and was advised to end the show immediately after it happened, but the singer went on to perform with a bloodied hand and clothing for another half hour.

He was reportedly rushed to a specialist in Los Angeles after the concert and is now recovering from his injuries. Iglesias’ publicist, Joe Bonilla, later shared some Instagram shots showing the bloodied singer during the concert:

Again: be very careful when dealing with camera drones — they can pack quite a punch and do some serious damage to you if you’re reckless when handling them.